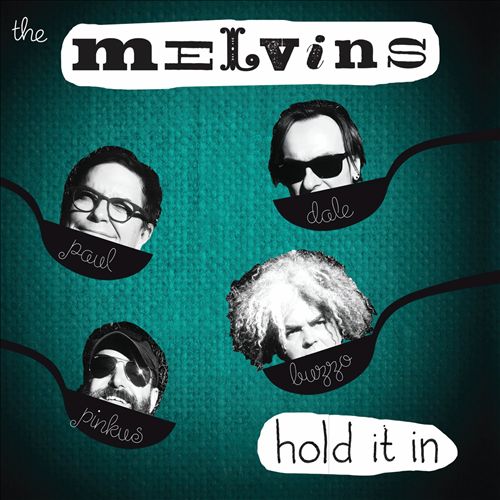 Melvins – Hold It In – Album Review

Hold It In and hold it up Melvins fans…we’ve never quite heard them like this before have we? In a true combination and collaborative effort, we’ve got an entirely NEW album from one of indie’s most legendary bands responsible for influencing countless of the big names we know and love today. In a massive twist to their usual methods of madness – this is one of the first times the Melvins have recorded where the core band members weren’t the driving force behind the inspiration and the writing. This time…the Melvins are back with ferocious new spins on their sound brought forth by combining their incredible talents with those of two other massive-names for the alternative-scene; Paul Leary and J.D. Pinkus of the Butthole Surfers.

The beautiful thing is…in a ton of ways, this is absolutely still the Melvins you know and love…the production, you’ve still got your frantic, enchanting Buzz Osborne….still the incredible timing, feel, beats and fills of Dale Crover…

….but the flipside being that addition of two members of one of alt-rock’s arguably most adventurous and strange bands. It ends up being in many ways, like Melvins, uncharted.

With a hurricane of an opener, this new combination of the Melvins sound works instantly; “Bride Of Crankenstein” is one damn unforgivingly brutal assault. It still has much of the slow/heavy groove you know and love, but in all honesty just have a listen and you’ll hear what I mean; this song is as in-your-face as they come and an absolutely brilliant way to start it all out.

Forever built on surprising YOU and challenging themselves, Melvins instantly switch over to their pop-instincts, completely on overdrive courtesy of their two new cohorts. Call me a sucker, call them ‘sellouts’ – you’re wrong in both cases; “You Can Make Me Wait,” is a completely brilliant track and extraordinarily unique in the Melvins’ catalog. Beautifully filtered vocals and compellingly melodic.

I might be an even bigger fan of the track to follow; “Brass Cupcake,” is one absolute sick-mother of a song. It’s got groove….it’s got rhythm….it’s got style, hooks…this track has it all. So far, Hold It In is holding my interest squarely & securely. Addicting with its choppy guitar lines, hugely massive vocals…it’s still on that edge of nearly pop-rock here, but maintains its alternative-indie attitude with a sound reminiscent almost of something like TV On The Radio-meets-Queens Of The Stone Age. And you’ve gotta remember kids…chances are BOTH of those modern-day bands would more than likely cop to the Melvins being at the top of their own influences…so remember who got to these sounds first!

I personally think I was expecting something much more akin to “Onions Make The Milk Taste Bad,” overall as to what was coming my way for sounds and songs here in this combination. The musicianship on this album is just immaculate perfection, and this track proves it. Every single member of this new collaborative combo is firing on all cylinders here…furious intensity and a jaw-droppingly perfect mix happening on this electrifying tune.

Though…these guys have always known how to party…it could have well just as easily gone in the direction of the extreme-pop & party anthem, “Eyes On You.” It’s a track like this that makes you appreciate just how amazing the fact that they’ve been under the bubble of massive stardom and fame for the majority of their career. Big, but not HUGE. Well-known, but not well-spread. Everyone who’s ANYONE knows them, but no one knows them. You dig? A track like “Eyes On You” shows you that even bands like The Strokes would have put their time into the music and teachings of the Melvins.

“Nine Yards,” takes you back to their driving drum-beats and explosive riff-guitars. Crover is just off-the-charts pounding away on this one and the album Hold It In, is proving to be one of a massive musical diversity here. Was it a challenge for the Melvins? This I don’t know. You’d think it would be…to kind of step out of your own habits after being a band with such a long career…but in many a sense, they’ve always tried to do that. Perhaps why it sounds so perfect, easy and effortless is that they found a perfect new way to create through this new collaboration…people that understand them…that were ready to challenge themselves all over again, even after this far into their career.

And listen to the results! “The Bunk Up,” another genius track! I mean, why NOT bring in an accordion solo towards the middle? The melodic addition of xylophone…Crover keeping the beat…I absolutely loved this track and all the diversity contained within this one piece. As it switches between the melodic and the dark, slow-burnt atmosphere of “The Bunk Up,” I find I kind of have to admit…while it might be a somewhat non-traditional update overall on the Melvins sound in a lot of ways…I also have to admit it’s the first record of theirs to truly excite me from their previous 2 or 3 last efforts. There’s a newness you can audibly sense on this album…THEY were just as excited about what was coming from the amplifiers….you can hear it!

As they burn down the album with the lengthy & twisted “House Of Gasoline;” a twelve-plus minute epic finale – I think I’ve come to the conclusion…that there’s literally something for everyone here on this album. Whether you’re a fan or not, whether you like melodic-pop or storming-rock there is a sound and a song on Hold It In for you, if not many. As you listen to the Melvins blend in between sounds and mix their own mastery time and time again, the switch between these sonic-textures becomes less jarring, more gradual. There’s a definite flow here, and a fantastic assembly on this album. Much like the Melvins career would look like in a write-up; it’s weird, but damn is it incredibly innovative, well-played and well-written.