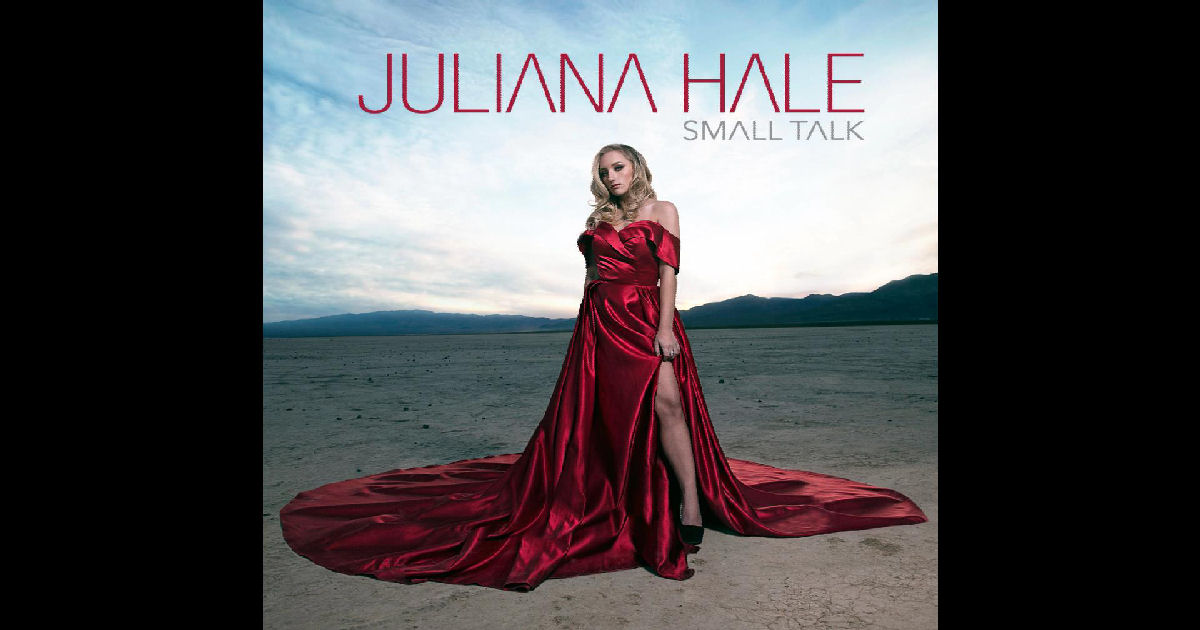 There’s quite a story & something special happening here.  If you have a read over Juliana Hale’s biography, you’ll learn of the brutal battles she’s had with her health throughout the years…so many in fact that by the sheer length of the write-up alone you’d assume she’s much older than she actually is.    With health-issues so tough that they could very well have threatened her ability to sing, when you hear how incredible her voice is and how much talent she has, you realize what a living-nightmare that would have been to wonder if that was all going to go away before she even really had a chance to get started.  Truth is, she’s fought against a lot – more importantly, she’s found a way to come out winning.  I won’t get too in to the technical-stuff, but she essentially had a surgery in 2016 that allowed her the actual opportunity to pursue her dreams at full-force afterwards due to how much it had helped her.  She’d release her TIME EP in 2017, which contained the songs she wrote during the time that she was sick.

Think about that for a moment.  Seriously…take a second, and think about that.  I will forever admire the courage and commitment of artists like Juliana who, while at their lowest-points in life, still reach out towards the light and to music.  Even at times where she barely had the strength to move from point-A to point-B, Juliana never gave up on the music she was making.  Now that she’s had time to process all that and move into a healthier time in her life that actually allows her to LIVE it – she’s also got the opportunity to show the world exactly what she’s capable of, all over again, only this time around she doesn’t have to dwell on what’s holding her back & can focus on moving her music & career forward.  The results are the extraordinarily confident, empowering, and stunning songs you’ll find on her Small Talk EP – Juliana Hale is sounding stronger than ever and completely ready for her moment in time.

Not even remotely kidding, all four of these songs come out extremely well and offer different glimpses into Juliana’s style & sound.  If you don’t immediately get chills listening to her sing the opening “Anthem,” then you’re honestly missing out on something that music can provide you with overall.  The fantastically graceful way that Juliana sings makes an immediate & memorable impact throughout the verse of “Anthem,” which you can totally tell is building quickly towards something even bigger to come.  That being said, I don’t want anyone to underestimate the exquisite way this song begins – the beauty that Juliana puts into this melody is beyond description and truly breathtaking.  In terms of a beginning to a record or a first experience with someone’s music, it simply doesn’t get any better or more memorable than this.  From the gorgeous melody of the verse to the amazing energy that fuels the chorus, Juliana sings with a boldness that perfectly matches the empowering vibe of the song, especially when those massive drums kick-in to power this song right to the next-level.  Lyrically it’s aces, the emotion she sings with is purely gorgeous – and I absolutely loved the call/answer approach taken to the chorus, where she has just a tinge of effects on that backing vocal…supremely effective.  Quite honestly, I found every single second of “Anthem” to be just as compelling to listen to as it was captivating.  The use of strings around the second minute were a perfect addition, the breakdown was a bold moment in time, leading to an even bigger return to the finale of this first tune.  Stunning.

The EP’s title-track, “Small Talk,” has huge crossover potential and widespread appeal.  So much so, that I was nearly laughing out loud trying to imagine promoters trying to put her in some kind of box or category…it’s almost a completely impossible task.  On this track alone, there’s R&B, Pop, Rock, Alternative, Electro, & Jazz influences to name a FEW of the elements that are combined to create a real stand-out track that’s modern, fresh, and entirely vibrant.  I love the drums throughout this entire EP, they’re used so remarkably well in this set of four, always providing an extra layer of depth to the music that really makes an impact.  On a track like “Small Talk,” aside from Juliana’s wild & stylistic performance on the mic, those drums will likely be a lot of what you notice – and I suspect you’ll find that quite impressive to your ears.  “Small Talk” is nearly led by the beats of the drums, providing Juliana with a unique platform to really create the rhythm & melody we hear with the movement in her vocals.  She’s got that Florence Welch kind of sound working in her favor in her vocals, with what’s nearly like a Rihanna-esque set of ideas for the songwriting & rhythmic style that “Small Talk” has.  In any event, there’s no question about the relevance of a sound like this for what’s happening out there in music today – “Small Talk” stands a massive chance of catching the ears of a huge audience out there. 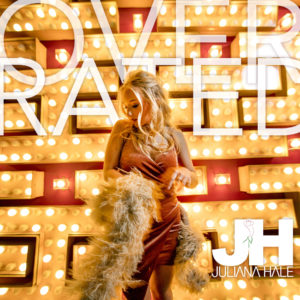 I don’t want anyone to get me wrong here, so I’ll start by saying “Overrated” is still flawless in performance, production, execution & all-that…and for some, I have zero-doubt this will be one of the potential favorites out there.  I’ll admit that it grew on me over multiple spins…mostly because I absolutely love the way that Juliana sings…there’s such remarkable commitment & strong tones coming through the microphone, that in virtually ANY setting, I’m 100% positive I’d love hearing her sing.  On this EP of four songs however, I was right on the fence in terms of whether or not “Overrated” fit with the rest of the set, whereas I had zero-question about the cohesion in the other three.  The combination of an 80’s-influenced style of songwriting and early 90’s synth-rock…hmmm…it WORKS…like I said, don’t get me wrong…there’s no doubt about the fact that “Overrated” will stand out on a playlist for how flashy & shiny the sound is.  Best way I suppose I can put it, is that “Overrated” seemed a bit less Juliana and a bit more Nashville-esque songwriting…if that makes any sense.  You can feel that ‘this is a hit’ attitude & inclinations at work here…and likely as a result of the prevalent synth-sounds, the experience of “Overrated” feels a bit more disconnected and less-real than the surrounding three songs by comparison.  Almost two or three songs-worth of ideas combine on “Overrated” – there are parts that fit this record perfectly for sure…does it go a bit too over-the-top to grab your attention?  Maybe.  When I think of the impact that a song like “Anthem” can make with its more subtle & gradual approach, I’ll admit, that’s where the real magic in the Juliana-sound is for me personally.  “Overrated” could easily be a single, there’s no doubt about the potential that exists for that here…I’m just here advocating for what’s connected with me, which I think is in the more humble approach of the opening/closing tunes.  Put it to you this way…the other three songs on this record will absolutely catch & keep your attention through the light that naturally shines through them…”Overrated” has an extra huge neon sign around it all and a giant arrow pointing to this song with a sign full of bold capital letters saying “LISTEN HERE!”

“Mannequin” was the song I felt made the most impact beyond the initial experience of “Anthem” – I heard it for the first time earlier on in the month, and long after I was finished listening for the day, I could still hear the main hooks of this song bouncing around in my head, which always tells me someone’s onto something.  The chorus of this cut is built stronger than steel…I love the empowering vibe in the lyricism and I love that the music echoes the sentiment so brilliantly.  In terms of structure & songwriting – you can’t deny just how perfected the craft truly is on “Mannequin” – there’s no doubt it’s got the hooks to be a big hit for Juliana, but I love the professional restraint being shown here.  I feel like “Mannequin” could have gone for the bombastically-bright sound that “Overrated” had, but reigned itself in to tighten-up the corners and deliver what’s essentially, a completely flawless tune that’ll hold up strongly over time.  The mandolin-riff that starts the song and the clever nearly-orchestral, artistic opening of this final tune is unique and has brilliant texture – and of course, Juliana is as impressive as ever…she literally hasn’t had a single note or tone out of place on this entire EP.  Displaying a control that’s well-beyond her years – she’s almost in to St. Vincent territory here on the bridge-hooks of “Mannequin” – adding yet another possibility for the kind of style, sound, and potential Juliana has for the future.  I don’t think there’s a moment of “Mannequin” that could have possibly been made any better than it comes out and it’s a highlight song to leave us on as we now eagerly await the next chapter in this artist’s story.  If there’s one thing that this entire EP makes clear, it’s that there WILL be more to this story…Juliana has an incredible future ahead of her.  It doesn’t take a music-critic to come to that conclusion, believe me, anyone out there will be able to hear the limitless potential and possibilities that are within reach for this stunning singer.  Credit where credit is due as well, the production from Grammy-Award winning producer Skidd Mills and talented co-producer Billy Dawson has been spot-on…the record sparkles with impressive sound on every cut and all hands involved from both sides of the studio boards should be sore from hi-fives for this effort.

Those that know me really well know that I’m addicted to many talent shows out there in TV land…and all for the same reason…it’s that ability to visually SEE and HEAR people going for their moment with everything they’ve got…I find that endlessly inspiring and I’m sure I always will.  Every once in a while, actually, probably more often than not, someone out there with a great story of personal struggles will go on to beat someone out with what’s arguably more potential or talent…which can be frustrating.  But even more rare, and perhaps the most satisfying to bear witness to, is that artist like Juliana that has the story AND the talent to go with it.  She’s got everything it takes to succeed and the ‘it’ factor you can hear without question…and after the battles she’s been through, you can hear just how strong she’s come out on the other side of it all.  The Small Talk EP is remarkably stunning and a noteworthy addition to the music of 2018 so far – and believe me when I say, she’s still just getting started.  After listening to this record and knowing she’s already been through the hardest part to get to where she is today – the idea of music this identifiable, versatile, and memorable, leading to Juliana Hale becoming a household name seems like a natural inevitability.

Find out more about Juliana Hale at her official website at:  https://www.julianahale.com/