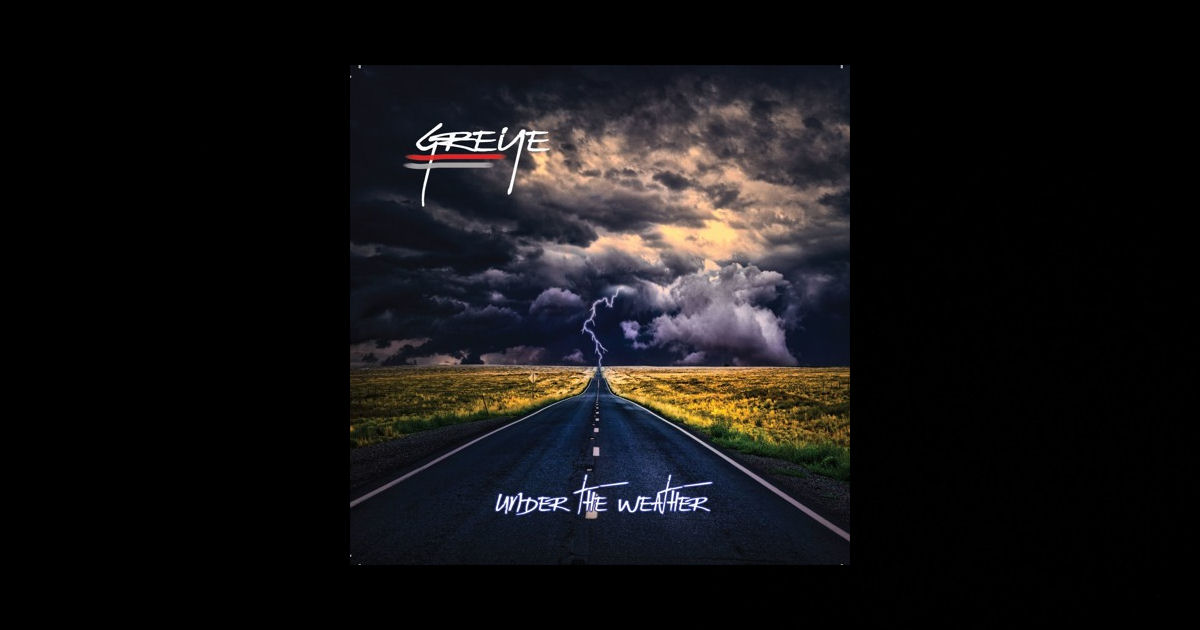 Sometimes you can’t help but see a piece of information or comment out there that catches your eye.  When I checked out the lead-single “What If I” from GREYE’s latest record Under The Weather, I happened to glance at a couple of contrasting comments that indicated a bit of polarization out there in the music-community when it came to their new tune.

And like I’ve said here many times, let the people talk – it’s much better if they are than if they aren’t!

I do get it however…I can understand that a track as stylistically designed as “What If I” is going to attract the attention of some with its flash & dazzle…for others, maybe it’s a bit too vibrant or something…I dunno, is that even a thing?  I suppose it’s possible.  GREYE starts off “What If I” with a spoken-word intro to the hooks that seems to have divided a few of the people out there; for all of ten-seconds or so, good lord, it takes longer to make a comment on it than it does to listen!  Definitely not the defining aspect of “What If I” – and it serves the purpose of giving us a unique gateway into their new single that’s undoubtedly unlike what they’ve done in the past or moves they’ve made before.  Pass or fail in the court of public opinion doesn’t matter – the benefits of being creative in structure & composition and going after an idea with commitment lead to all kinds of wild results you wouldn’t get by simply playing it safe.  Anyhow…it’s just an intro people…either way, don’t give yourself a coronary.

As far as the meat & potatoes of “What If I” are concerned, I can imagine the bright, rhythmic-groove that exists in this vibrant & lively tune would appeal to many people out there.  Personally, I’m a bit more tossed up on this track than I was the last time I heard GREYE – but it’s definitely not like I’ve got any major concerns, “What If I” still has multiple reasons to make me wanna listen.  Best way I can make my case for what I struggled with on this tune was that I felt like…for lack of a better term…some of the pairings between the vocals/instrumentation were a bit ‘matchy-matchy’ – know what I mean?  So it ends up being a case of, what we hear sounds great, but GREYE kind of moves through this tune as one giant entity; the flipside of that coin of course, is that “What If I” is remarkably tighter-than-tight.  It has to be…each part of the instrumentation depends on the other in a really interconnected way that, were one part to drop, you’d completely hear it, even in the vocals and how they respond to the music.  In that sense, GREYE had to bring their A-game to every single second of this cut and kudos to them for never letting the focus wander for even a moment…it’s a flawlessly played tune without exception.

And that guitar solo!  The tone & skill is remarkably badass.  Short & sweet, lean & mean – it’s a highlight moment for certain.  GREYE never has a reason to shy away from any of the elements of their band taking the spotlight for a ride, they’re all aces when it comes to their individual parts and combined they’re certainly displaying a unified front on the new single “What If I.”  Major credit to Jett Wolfe for the guitars on this cut though…not only is the solo great, but the licks he’s supplied the entire time have been filled with genuine character & personality that add a ton to this tune.  Ray Grimard is a beast on the drums…this man can seriously PLAY – the control, precision, and pacing of his style is definitely something you’ll notice…and for you pros out there, you’ll definitely hear that this guy has that remarkable timing a band really needs to have someone they can rely on from the throne.  Joshua Reid keeps the rhythm section locked-down with Grimard, strengthening the vibe with bass-lines that complement the vibe without becoming the dominant factor.  Not sure who’s bringing the piano/keyboards to this cut, but they’re definitely an essential part of the atmosphere & melody in this tune that can’t be lived without – make sure to pass’em on a high-five from me.  All-in-all, there’s no doubt that the light-funk and progressive mix of style & sound here definitely has appeal to it…it’s entertaining, it’s dynamic, it’s got lots of stop/start to it that chops up the vibe in a way that gives this cut its own unique movement that I’d imagine would have quite a few people streaming to the dance-floor.  And unless you’re a part of the clean-up crew at the end of the night, that’s always a nice problem to have ain’t it?  “What If I” is designed for good times, celebrates musicianship, and is quite inviting to listen to from beginning to end…you get the idea pretty quickly on this track, which might lead to a quicker wear & tear over time for both listeners and the band as well, but the fact that GREYE saves a ton of highlights for its second-half should prevent that from happening.  The entire vibe loosens up, the instrumentation soars, lead-singer Hannah Summer brings out her best moments as well; but let’s also face facts – is there ever a moment where she’s not completely fantastic?  She’s a seriously electrifying personality when it comes to GREYE’s overall allure…any musician out there would be able to spot the incredible level of skill in the band for sure, but for the rest of the people out there that go to an office 9-5 throughout the week, it’s that presence on the mic that generally matters most.  And in that sense, GREYE’s truly got it all…Hannah’s just about one of the best of the best out there when it comes to the sheer combination of passion, energy, tone, and commitment – it just don’t get more convincing than listening to her voice on the microphone…you KNOW beyond a shadow of a doubt that she’s feeling the vibe.  Call it tight, call it matchy-matchy if you like, whatever it is to you aside, we can all agree that the way she continually finds a way to rival the incredible musicianship surrounding her always makes for an amazing listening experience and could pretty much help anyone overcome any hang-ups they might have from style or sound throughout the song.  She’s magnificently enticing to listen to and when she wants to lift the energy of the entire band around her, she’s able to do that with impeccable tone & timing…check out memorable moments like around the 1:20 mark before the hooks or the 2:20 mark as she belts it out on the way into the second set of solos/instrumentation on “What If I” – she’s more than capable of extraordinary things and definitely a major part of the identity in GREYE’s overall sound.

It’s fun, it’s bright, it’s colorful, it’s undeniably bright & inviting to listen to, it’s got a playful vibe and serious skills on display…in a word, their new single is actually quite charming really.  I think the people out there will dig the heart & soul that GREYE clearly puts into their music and I’m sure they’ll dig the vibe & energy that they’ve got here on “What If I” – well done.

Find out more about GREYE at their official website at:  https://greyemusic.com

Tags: Greye Singles sleepingbagstudios What If I