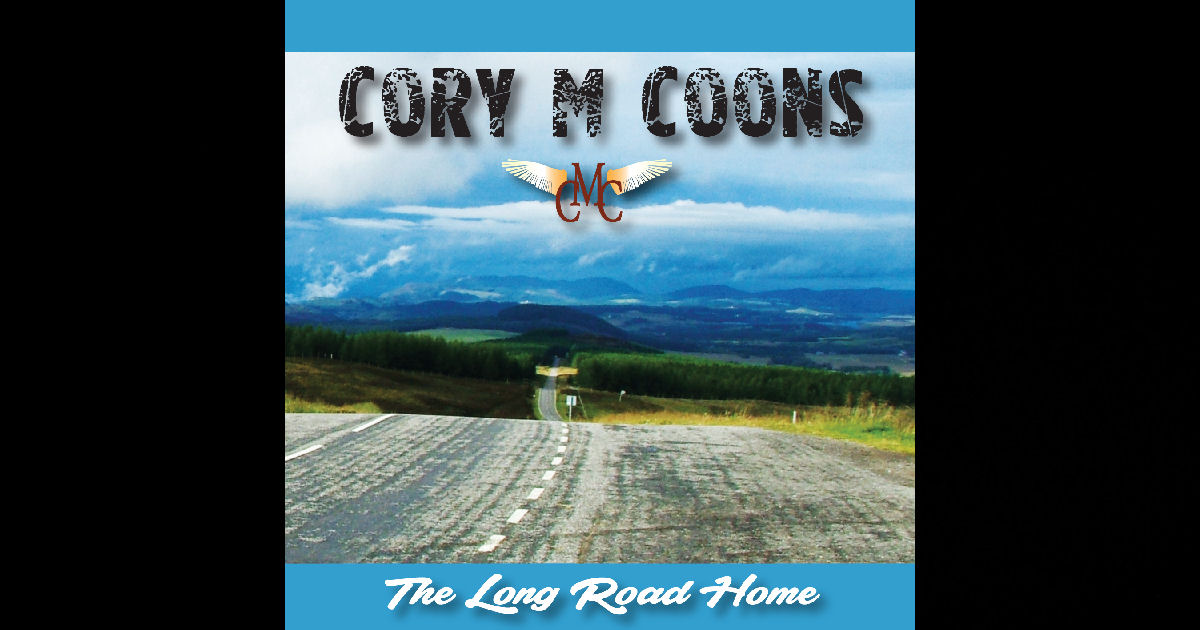 According to legend, Cory M. Coons has been out there making music since he was about thirteen years-old.  Kind of a relevant fact…though I have absolutely no idea how old he is now…but what I can tell ya, is he latched onto the style & sound of music he grew up loving and clearly never let go.  He’s human!  Face facts…whether you play music professionally or not, you’re likely the same way…you still love those classics from your youth and more than likely still hold a lot of those bands/artists you were digging on way-back-when dear to this day.  Cory M. Coons wears the sum of his influences well…this suits him.

That being said, there’s no doubt an uphill climb coming for the man in the modern-day era…there’s an audience for this style/sound he’s got, but it’s changed…and the majority is harder to reach, now relegated largely to the online realm.  But make no mistake…there’s a whole lot of lighters-up fist-pumpers out there still waiting to strap on a headband and rock right out…just takes a bit more work to find’em, but they are out there.  While the sound Cory might be rockin’ might not be what you typically hear on the surface of the mainstream these days…let’s not forget where this music has come from and how it spent years & years & years dominating the charts…it’s a timeless style for a reason.

So let’s see here…we’ve got a sample of Cory’s new album The Long Road Home with a couple of recommended tunes in the mix here to review and a couple of dealer’s choice cuts from the record that I stumbled upon on my own.  We’ll start with the tracks I’ve been directed to and go from there…

Production & performance-wise, there’s nothing to fault Cory or his band for or take away any points for any reason…which essentially leaves you with personal taste and what you do/don’t like yourself.  A track like “Once Too Many, Twice Not Enough” has a bright melody & sweet energy driving the chorus hooks…I feel like they’re memorable enough.  There’s a grandeur in this track that sounds like it’s about to build and explode into a cover of Tom Cochrane’s “Big League,” but ultimately “Once Too Many, Twice Not Enough” heads for a more pop-inclined approach.  Great tones on the guitars, solid spirit in the music & meaning behind the lyricism…the structure is designed to expand and open-up widely to create those big sing-along moments.  If I’m being truthful, I’m probably more of a fan of everything that’s not the chorus on this particular tune; I can acknowledge the strength of the hooks, but they’re probably a bit too bouncy & playful for myself.  Excellent musicianship in Cory’s backing band, Cory sings the tune with passion & heart, and the production has a remarkable clarity that invites you right in.

“Long Road (Dead Man’s Dream)” adds some real definition to the groove & sound of the music – and my ears really dig that.  This second cut had more of the beef I was looking for than I was getting on that first track…this is meatier.  The low-end riff is freakin’ magnificent and really keeps this cut movin’ strong.  Like a rhythmic version of G&R at times, Cory has that slight Axl-ish sound to his vocals…which again, for people that love the music in similar bands/artists of that era, well, they’re pretty much guaranteed to like this based on that comparison alone.  By comparison to the first cut though, I think “Long Road (Dead Man’s Dream)” probably stands a bigger chance of reaching a wider potential audience…let’s face it, no matter what you normally listen to, those are some ear-catching riffs that demand your attention.  The balance on this cut is excellent…I couldn’t decide if I liked the verse or the chorus more, and I always love having that problem whenever I can…it tells me that each part of the song has its own strength.  And when you’re real lucky, those main elements fit together perfectly and you get a great jam like “Long Road (Dead Man’s Dream)” to come out…it’s rare, but it does happen!  Cory actually reminds me a bit of the vocals in Ugly Kid Joe on this cut…been a while since I thought of those guys…used to really love that band and I’d suppose I’d say I still do, even though it’s been a long time since I’ve put it on.  Killer guitar solos and instrumentation once again…like listen to moments around the 1:20 spot and acknowledge that killer tone and the grinding groove busting in to separate the verse & chorus & light up the musicianship for a moment or two along the way – same thing around 2:25 only bigger, better, longer, & stronger…but you get the idea, lots to take in on this wild experience.

Even though the familiarity in the approach to the guitars on a track like “Would You Stay?” will remind you of several hit-songs from the past – again, there’s a reason you’ll feel like you recognize that sound – it’s because it WORKS.  Personally, I don’t know how people resist it…there’s just something seriously charming about the pace and way that sound hits us…you know, the whole like, what is it…”Every Breath You Take” style of approach…you know what I mean, equal doses of melody and rhythm, suppressed & controlled brilliantly in a way that really lets the sound shine right through to your soul.  So did this catch my attention when sifting through the rest of the record to collect a couple more samples?  You bet.  Again – I don’t know how it wouldn’t catch EVERYONE’S attention…”Would You Stay?” has that melodic magic that makes moments last a lifetime…a song that you instantly want to become part of your own personal soundtrack.  Cory’s put together a decent melody & vocal flow to add to the music – but full disclosure, it’s the music on this cut that is likely the most defining factor in what pulls us in to listen.  Highlight solo just before the three-minute mark too…short & sweet but highly effective; if anything, from what I’ve heard on these tunes whenever a short solo is busted out, all I want is a few more bars or a few more seconds of it…the musicianship in this band of Cory’s is excellent and I certainly wouldn’t shy away from including more of that in the future.  In any event – I like me some “Long Road (Dead Man’s Dream)” – there’s a great chance that would have walked away as my favorite of this set were it not for the smooth rhythm & sweetness of “Would You Stay?” – love this tune.

“Break The Fall” was another great tune I stumbled across in this set of songs from The Long Road Home.  Even though “Would You Stay?” is fairly gentle & subtle, “Break The Fall” probably dials back the energy arguably even further…but again, these ingredients stand out…each element of the musicianship contributes to the song.  Kind of like a combination of what you’d imagine you’d get from a collaboration of something like…hmmm…like Bon Jovi, Heart, and The Pretenders.  You get that ballad-rock approach of a Jovi with the writing, the production of a band like Heart, & melodic sound of a band like The Pretenders…and ultimately, that leads Coons to a seriously lighter-up moment to finish this song on real highlights that make for a memorable impact.  You get a couple different aspects of Cory’s overall sound on “Break The Fall” though…you get that melodic rock-ballad dude providing the smoothness on the mic…and eventually, you get the wilder-side of his persona as the song heads into its finale.  The lyrics are solid, the pace is comforting, the sound is warm & inviting…there’s a melancholy in this tune, but it’s got equal parts hope in the mix as well…nothing desolate here, just relatable & real.  The final forty-five seconds of this song…are perhaps my favorite moments…I love the fireworks in this finale and how it raises the stakes one last time and I dig the final acoustic deconstruction to the end.  Overall…this Cory M. Coons guy seems to know what he’s doing when it comes to the art of songwriting and delivering on the potential of his efforts through the performances on these recordings – dude writes a solid tune and he plays them with all the passion, skill, and heart you’d hope to find in any kind of music you listen to.

Find out more about Cory M. Coons at his official page at:  http://www.corymcoons.com