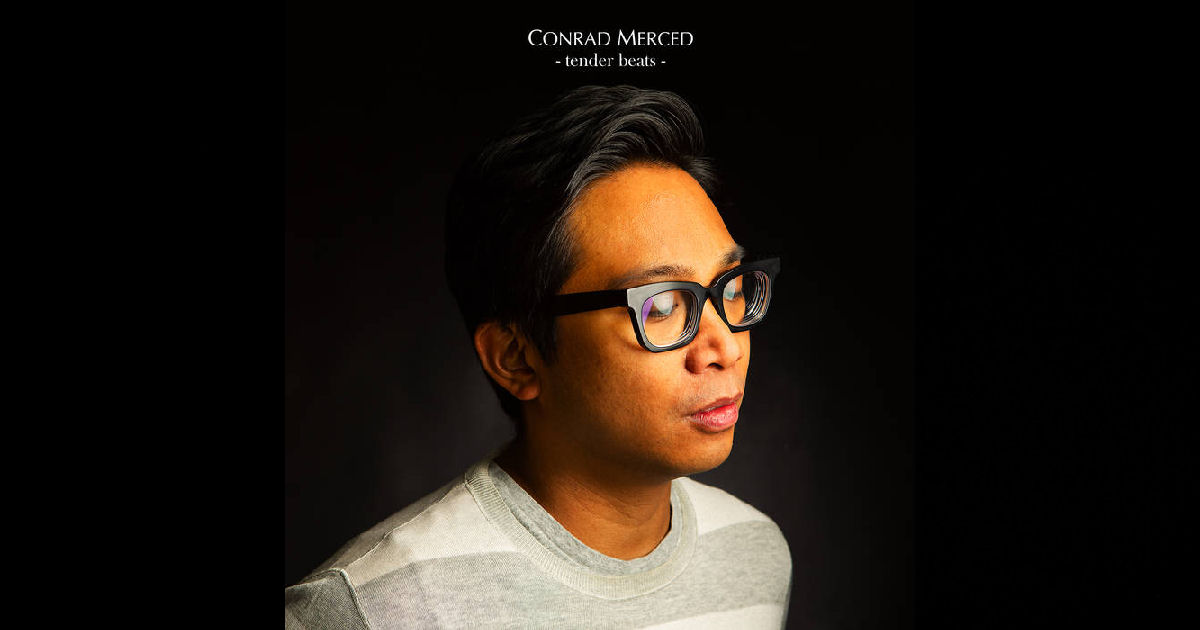 Always interesting to see what gets sent our way when reviewing a slice of a record that’s come out.  I’ve got “Thirty Five,” “A Dog In The Fight” and “Ghostwalking” here in the mix from Conrad Merced’s new record called Tender Beats…which are all great tunes in their own right; ultimately I ain’t knocking the choices someone has made in what to send, because after everything I’ve snuck a peek at from the rest of the record, sounds like you couldn’t lose no matter what you choose.  Conrad’s got serious magic in the melodies he creates…songs like “Before The Storm” with its brilliant hooks, or the soul-soothing atmosphere & vocals on “Don’t Stop Here” will absolutely confirm what I’m tellin’ ya…definitely a couple tracks I certainly would have been tempted to send out to all us critic-types out there for a sample…

…just sayin.’  Ahem.  Lots of genuine sweetness and gentle Indie-style emotions on Tender Beats.  The final track on the record, “Still Can’t Walk Away” is a perfect example of Conrad’s emotionally-complex & thought-provoking lyrics that come straight from the heart, presented in a delicate sound you can’t help but enjoy.  And then the record repeats, and you’re right back into the ultra-inviting melody that begins the record as it slides right into the spectacularly smooth & golden hooks of its title-track.  Like I’ve been tellin’ ya from the get-go…Conrad was spoiled for choice as to what could be sent out from Tender Beats – I’ve very much enjoyed what I’ve heard from this record so far.  Let’s dig in further…

“Thirty Five” was actually the first track I heard from Conrad, and it delivers in-full on making an excellent first impression.  The music is wonderfully chill & serene with plenty of sparkle & shine to it, the vocals have an inherent smoothness to’em that you’ll soon discover is part of Merced’s signature half-whispered style.  Not the bad kind where it’s whispered because of a lack of confidence – he’s got every reason to be confident in his songwriting, vocals, and music – it’s a stylistic choice, and one that works well for him.  It certainly suits the vibe of a song like “Thirty Five,” this entire song moves along at such a remarkable gentle pace with equally delicate sound…it’s a beautiful initial experience with Conrad’s music that definitely makes an impact, no matter how tender this tune from Tender Beats might be.  Excellent attention to detail in this song from the perfect tone of the guitars to the smart production on Merced’s vocals…it’s humble, sweet, honest, and relatable…a combination that you always hope to find in a singer/songwriter, because it leads to real music like “Thirty Five” that sounds so remarkably organic.  Conrad’s not overtly trying to impress you – he just is impressive.  Songs like “Thirty Five” come out as naturally as a heartbeat from his chest…tunes like this come from the inside.  Definitely a smart choice as a lead-single & a great representation of what the music from Conrad Merced is like to experience arguably at its best, “Thirty Five” has a truly sincere sweetness that ears are sure to love – and with the gorgeous video directed by the talents of Philip Goode, this tune also got the visual support a great single deserves.

“And when the song is over, we can hit rewind.”

Couldn’t have said it better myself, “Thirty Five” is a highly repeatable experience full of soothing vibes audibly & visually – check it out for yourself below!

“A Dog In The Fight” dives closer towards true Folk-music terrain with tons of details in the words, all still with Conrad’s shimmery Indie/Pop veneer intact fully.  Ultimately, a lot of people will connect with this tale on a lyrical-level as Merced tells you his own story, where it all began, and what life was like growing up – all this works well & comes out authentically sincere.  Melody-wise, songwriting-wise, bass-tones, guitars…these are all strong checkmarks in the win-column.  Would I have had anything to pick on with “Don’t Stop Here” or “Before The Storm” though?  Nope.  And it’s not that I’m gonna pick on Merced here so much as do my usual thing in pointing out where there’s still room to evolve & grow as an artist, which “A Dog In The Fight” will reveal to ya.  To be fair to the guy, he’s got a really tough vocal melody to work with on this song…not impossible, but as it stands on this particular recording, I have next to no doubt that there are already multiple spots he’d likely sing better today in being more familiar with the song over time.  I mean…I listen to Pavement pretty much non-stop…and if Stephen Malkmus is who Conrad Merced wants to be, I say have at it, “A Dog In The Fight” completely proves he could go in that quirky direction if he wanted to – but I hear much more potential for a Ben Gibbard in him overall.  He’s got some really spectacular smoothness in his vocals and spot-on melody when he’s at his most focused…and perhaps the looseness will be part of the appeal for others out there…maybe that’s the vibe he’s going for, maybe it’s not…but that’s the way it’s translating in listening to this song.  He released many of these tunes as singles prior to the record coming out, which looks to be the debut record from what I can find online…so, again, Conrad’s got plenty of time to sort out what works best & what suits his own style the most comfortably.  Like I said, this is strangely more close to up my alley than I thought it would be at first…but I listen to some strange stuff too; he’ll have to decide if that’s the company he’s looking to keep, or if rounding out all the corners relentless in the vocal-booth is the way to go instead.  All up to him direction-wise, I’m just here to tell ya the potential exists, Conrad sings well, but I have the feeling he can sing even better than he’s currently letting us in on here in this tune.

Okay…any last takers on talking about “Before The Storm” or “Don’t Stop Here” being the most single-worthy tunes on the record?  No?  It’s still not time yet?  Are you absolutely, positively sure about that?

Alrighty then, “Ghostwalking” it is.  Decent tune!  Not the single from this record by a clear country-mile, but it’s a decent tune from Tender Beats nonetheless, and I ain’t likely to complain about what I hear on this song.  For the longest track on the record at just one-second shy of a full five-minutes, “Ghostwalking” takes you on quite the gentle journey; laced with a background full of sparkling guitar notes and innovative ideas with the drum beats…lyrically, it’s a really solid cut and it’s a great theme he’s working with overall.  Whether or not “Ghostwalking” does quite enough to stand-out or has that one real moment of wow-factor…that’s harder to say…I’d arguably either you appreciate this song for the one vibe & gear it so sweetly locks itself into, or ya don’t…pretty much all there is to it.  For me, if there was a noticeable shift, it’s right around the 4:20 mark where the low-end of the music beefs up a bit before the end of the song…it’s a tiny part of the overall tune & something I wish we got a lil’ more of on “Ghostwalking,” but that’s where the stand-out spot was for me…that far in…where arguably, the song is nearly over at that point.  So no lie, that’s a bit of a factor for sure; I count myself among those lucky enough to have been enjoying the lullaby-like vibe of the music in this tune from its very beginning, but I could definitely understand if “Ghostwalking” might leave a few listeners wanting a little bit more from Conrad somewhere along the lines here to liven it up more somehow at some point.  As it stands, it’s a pretty, captivating, and hypnotic melody in many ways…you can get lost drifting away in “Ghostwalking” – and really, considering that everything sounds as good as it does, that really ain’t so bad, is it?  “Ghostwalking” might not be the most exciting song you’re going to hear in 2019, but there’s no denying it’s still a great one in its own respect.  Merced owns this vibe, focuses in, and stays there – what might surprise you more than anything else is how much you’ll wanna stay right there with him.

Find out more about Conrad Merced from his official pages below!