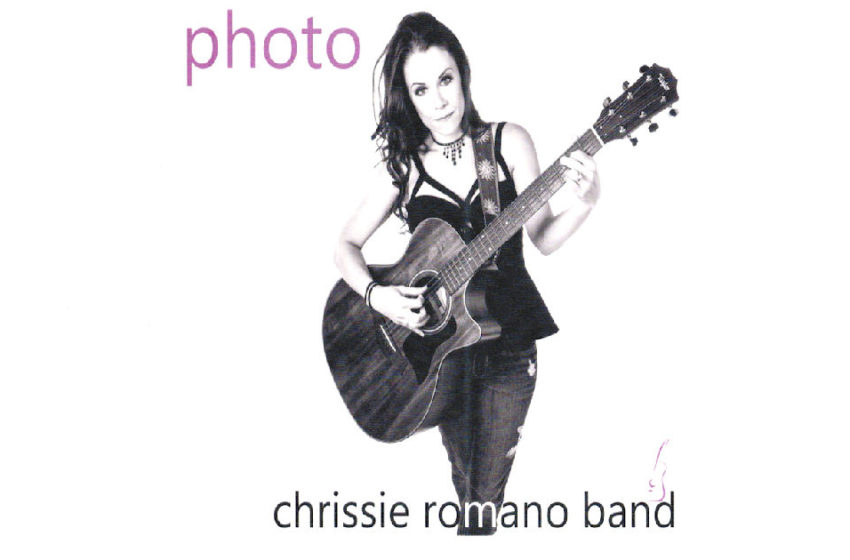 Hmmm…I can dig it.  Kind of feels like…somewhere in the middle between Hootie And The Blowfish and The Pretenders…I can appreciate where the Chrissie Romano Band is coming from.  “Photo” has that songwriter’s touch to it, that flair for performance, expressive vocals, and a pleasant, clean, acoustic pop sound to back it all up…a timeless combination that will always find its way to an audience of ears willing to listen, including mine.

For real though, by about fifteen seconds in, I was convinced this cut would be able to fit right on Cracked Rear View seamlessly…once Chrissie started to sing, that’s when that identifiable separation between what Hootie was doin’ and what the Chrissie Romano Band really begins.  There are still similarities in the songwriting style you could nit-pick over if you wanted to, in terms of the amount of imagery and story taking place within the lyricism, but hey, I’m a writer & I appreciate that personally.  Chrissie has written a lot of words into “Photo” – there’s obviously an advantage in doing that when it comes to those listening to the music for what’s being said & not just catching onto the hooks – and she’s used those extra lyrics to create a noteworthy narrative that’s based on real life events & genuinely sweet sentiment.

Chrissie explains this song’s origin much better than I ever could, so I’ll pass on the words I’ve got regarding what “Photo” is all about.  The notes I’ve got from her read:  “A few years back I was going through some boxes of old things from my parent’s house and I came across a photo of my mother who had passed away some years earlier.  I was instantly transported back to the days right after her death and I felt so much sadness that I was surprised because I thought I had “gotten over it” but as I always knew deep inside we never get over our losses, we just learn to assimilate them and this thought is the inspiration behind “Photo.”  That we can be doing well one minute and just a picture or a scent or someone’s hand writing can remind us of our loved one and we are transported right back.”

I couldn’t agree more.  In fact, it’s something I talk about quite regularly I suppose…I’m one of those chained-to-the-past type people and different miniscule moments can lead to a flood of memories coming back at any moment.  When my father in-law passed, I also witnessed my wife go through a much similar scenario…it never seemed to be the obvious things that one might imagine would easily bring back the memories she shared with her dad, it was always the smallest of moments that could send shockwaves of emotion right through her.  And as tough as those may be, there’s a real beauty in these moments too…a power that takes hold of our feelings and shakes us to our core, because we loved and lost…and that hurts sometimes.  But it’s in recognizing that…in understanding that we’re feeling so overwhelmed because of how much our loved ones mean to us in our lives…well…that’s a beautiful thing too ain’t it?  So like I said, I agree with Chrissie…we never really get over those losses we experience in life…and I think she’s discovered that as hard as remembering or revisiting these moments in our lives can be at times, it can also be the most wonderful reminder of those we dearly love.

“Photo” has that warm glow surrounding its aura…that blend of comfort & nostalgia in amongst a tough sea of emotions in turmoil that somehow points to an ‘everything’s gonna be alright’ feeling in the atmosphere.  There’s true love in Chrissie’s vocals that I believe you can really hear…you can hear that admiration & respect in this tribute to her dear departed mother…it makes a huge difference in listening to the words of a song like this.  You want to listen to all the words, because this story really does add up in great detail & the conclusions you’ll draw will be more than satisfying…much more like soul-soothing.  I think the more spread out nature of the lyrics to the chorus allows Chrissie to get across her best tones overall, which is the natural effect of a bit more space around, but I’m not complaining about her performance in the verse either…I think she gets the meaning & sentiment of “Photo” across in powerful, moving, and quite often charming ways as well.  As appealing as this tender tune may be – that’s also part of the uphill battle to get a cut like this out there; if anything, it’s almost too pleasant & inviting…this single might need to throw some elbows around to get heard, but it’s a solid tune for sure.  Shout-outs to Ken Romano (Bass) & John Pasquarella (Drums) as well…the instrumentation’s all on the mark, the melodies & rhythms are catchy…all-in-all, you can hear a lot of great things in the writing and performance on “Photo” from the music to the microphone…definitely a memorable experience & song.

Find out more about the Chrissie Romano Band at the official website:  https://chrissieromano.com