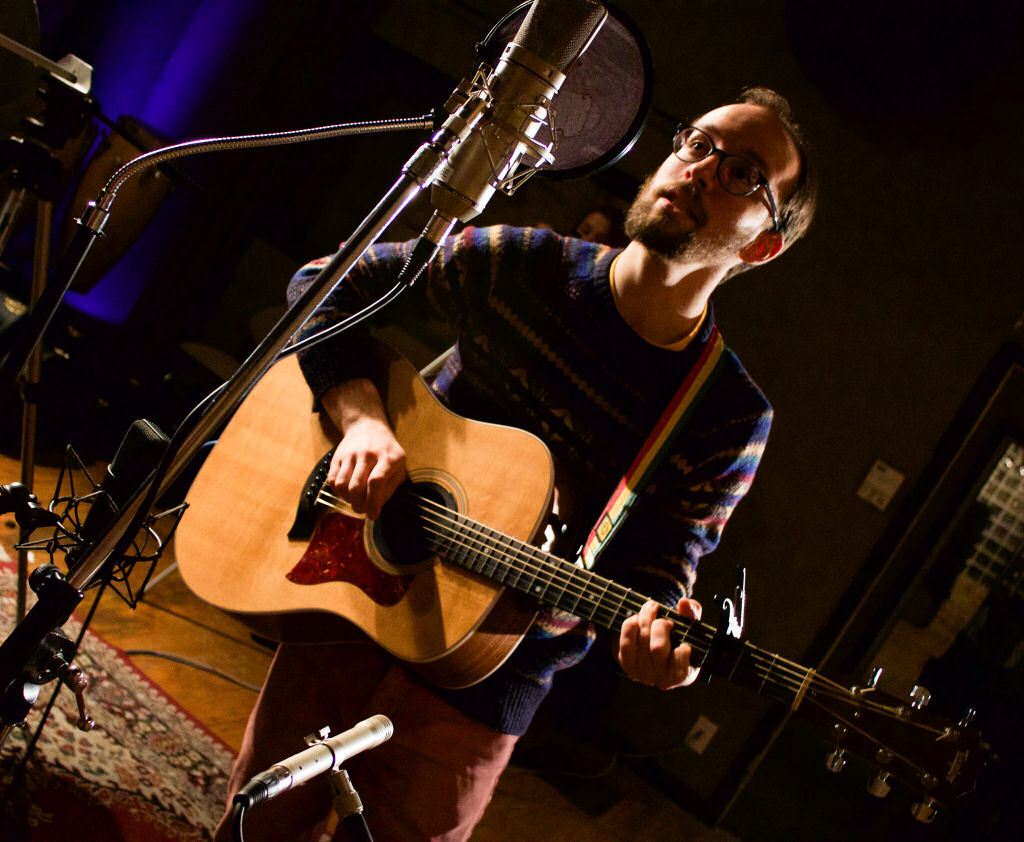 I’m kinda rooting for Chaz Hearne. This solo artist has enlisted some fantastic talent to assist him in bringing the songs from his debut album to life. Bouncing between playful sounds and heartfelt emotions, this acoustically-driven album hits the sweet spot like the ice-cream man driving up to your front door in the midst of summer.

Like a blend of Iron & Wine, Fleet Foxes and Ben Gibbard’s solo-work – the opening tune “MY MG” draws on a tender sound and enticing, comfortable atmosphere. As inviting as music could be, The Legend Of Core Dynamo starts sweetly and brings you in close as the room of musicians seem to come alive right around you like it’s all taking place in the comfort of your own living-room. Beautiful stuff.

I’ll fully admit…I wasn’t sure about “Let’s Be Honest,” so I’ll be honest about that right off the drop here. That being said, this second tune isn’t bad whatsoever – but it’s a very radical departure from the opening atmosphere in “MY MG” and almost into the showtune/theatrical kind of folk-music. I’m just not so sure about the placement of it on the album itself…I get that Chaz would of course want to express fairly quickly on the album that it has many dimensions…but maybe you’ll see what I mean when the subtle & gorgeous melodies of “I Go Outside” follow it. To me, sandwiched between the first & third songs makes the second tune “Let’s Be Honest” feel more like an intermission or a commercial in the middle of the intense made-for-TV drama you’re watching. Again…good tune, I just think it might have been more effective found later in the album.

It would be nearly impossible to not be outshined by “I Go Outside” no matter what the song before was. This beautiful song features the incredible violin of Jennifer Page who absolutely makes this song worth every moment of your time. Not only does she find perfect ways to compliment the song, she full on drives “I Go Outside” by the end and fills it with a sparkling atmosphere alongside the fantastic work of Alex Gilewicz and the guitars/vocals of Hearne. Really nailing a full-on vibe and sound, Hearne has orchestrated this song masterfully; the additional nature-sounds inserted into this track make this a complete highlight moment and an overall stunning achievement in music; it blends perfectly together.

As many of the lyrics deal specifically with The Legend Of Core Dynamo, a superhero of Chaz’s creation – it’s hard to say if there’s a specific timeline that was necessary to follow in a linear way or not…but if not, my vote would have solidly been to put “The Legend” as track two as this cut could potentially serve as a real gateway into Hearne’s music. Incredible bass from Chris Bentley who makes each note sound like it’s coated in a special melodic rubber drives this up-tempo tune to fantastic heights. Almost like something Colin Greenwood would come up with – Bentley plays this one fantastically and when it comes time for a little of the extra ummmmmmpppppphhhhh, Hearne calls in the extreme talents of Dan Powers to absolutely set the amplifiers ablaze with a hot guitar solo to end “The Legend.”

Once “Covered In Blue” started…there was something that became noticeably different to me through Hearne’s performance…this is the man at his best. The song is great too, but I’m talking performance-wise for the vocals…you can hear something about the way he confidently sings this one with his signature fragile tone that this is right in-the-pocket for Chaz…and the result is one of the most beautiful songs to grace the album with the sweetness you’ll find inside “Covered In Blue.”

“Lucky Him” reminded me a little more of Head And The Heart than any other band with the all-encompassing atmosphere it creates. Again like taking us into the studio with them, this track feels incredibly close up by the end as it builds throughout, starting from what feels like a very, very long way away. Much credit to the production of Nick Gunty and the mixing job he’s done…the music is big or small in all the right places. With large swells and tender falls, the energy in the music is matched wonderfully by Hearne’s sweet vocals and the talents of his surrounding players.

I feel like once “One” started…that I could already identify the incredible violin work of Jennifer Page…it already sounds unmistakable to me – she’s made an incredible impression on these ears. Chaz also deserves a massive amount of credit for a fantastic banjo performance and accompanying vocals. Great harmonies as it hits its hazy chorus…it’s like dreaming in the afternoon of a hot car while someone else takes the wheel for a while; the relaxed atmosphere is fantastically warm, bright and completely captivating.

So far the only thing I’ve questioned is the placement of one single song – that should tell you a lot about the effort, care and precision put into The Legend Of Core Dynamo. I can tell from song-writing alone that Chaz here would be a huge fan of our reader-voted ‘Best New Sound of 2014,’ Vancouver Island’s West My Friend and vice-versa. Great folk-qualities that really drive the music at the heart, but so much talent on the album that it allows the players to really explore the fringes of the genre to create some truly vibrant music on this debut record. “Symmetry” is a wicked example of Chaz switching up the sound into yet another fantastic direction. This low-end, percussion & bass-driven melody has that perfect slow-burn to its fire and catches a clever groove quickly; once again led by the absolutely astounding bass of Chris Bentley. Chaz…take my advice and give these talented musicians on the record a MASSIVE HUG and a Christmas Card…they need to know you love them! And you SHOULD! And I’m certain that you probably DO appreciate just how much effort, skill and passion they’ve put into this record…how could you not right? Fantastic musicianship on this album.

“Core Dynamo” was an interesting mix of things that worked and some…well…I suppose they work too when I think about it. Once again taking into account the superhero-aspect of the storyline within the lyrics…I suppose it’s somewhat acceptable that this one feels more almost like an old television show theme song at times. It might just not be my thing…or again, maybe something that I’d appreciate more with a dozen more listens down the road as right now, melodic, soft and sweet are my favourite aspects of Hearne’s music and the more theatrical songs become the less of that side of him there is. So…it’s a bit of a trade that doesn’t work in my favour on “Core Dynamo,” but once again, delivered flawlessly by Hearne and his team with more standout guitar work.

Had he not chosen to end the album with “In His Mind” I might not have had any more support for that argument…but alas Chaz-man, there it is in plain audio for us all! The hard audio-evidence of the immaculate performances he can create when hitting the soft & melodic side of his music. This final song plays absolutely beautifully in its isolated tone & mood and really caps a tremendous effort on a debut record from Chaz Hearne; there is so much here to like it’s actually quite amazing…and the best part is, there’s audibly something for everyone.

Find out more at the official homepage – Chaz Hearne at: http://www.chazhearne.com