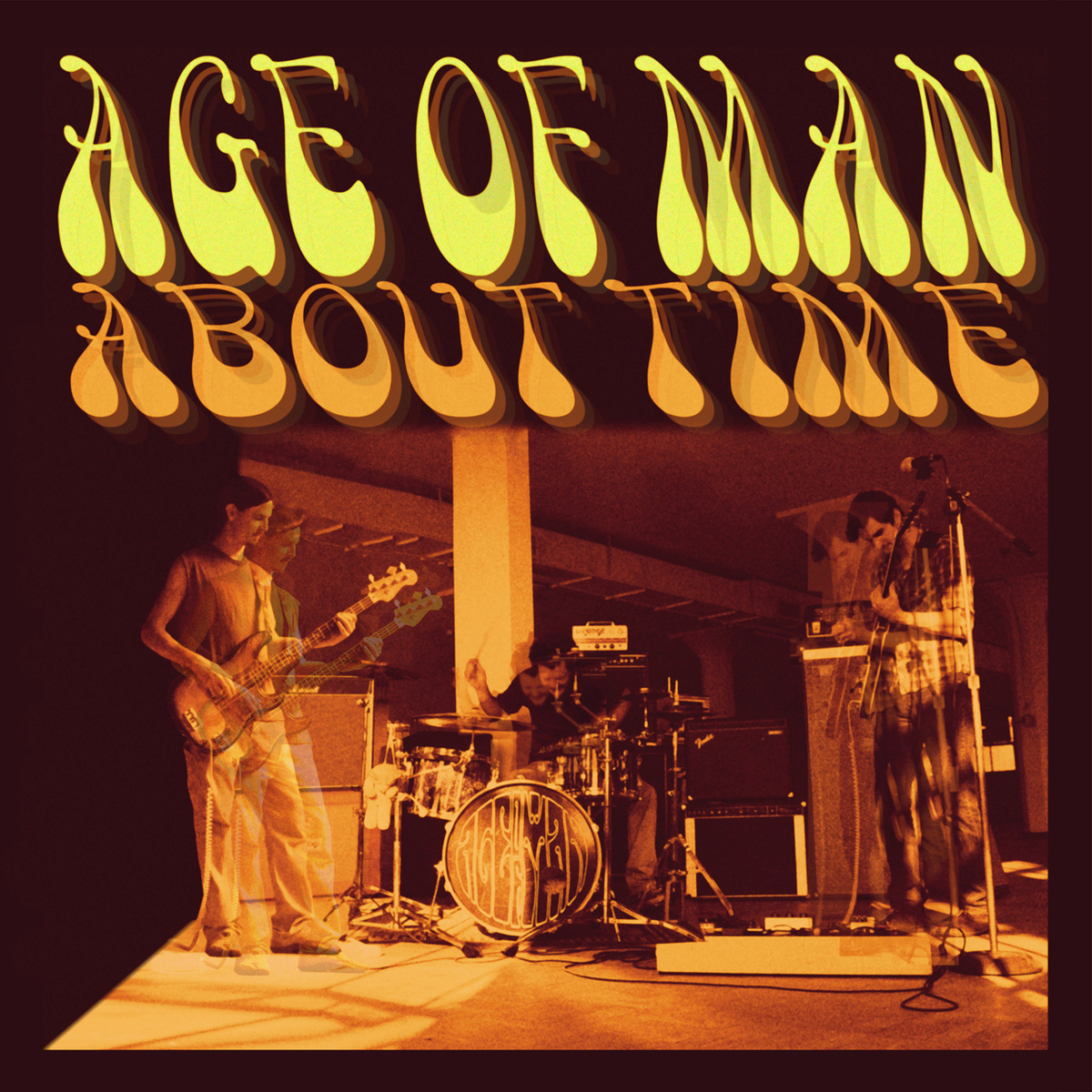 Taking us for a trip through electric-rock…and through their own catalogue as the revitalise and come out swinging with the updated production on the tunes from their Ebeneezer EP, released back in 2013. What a trip to be able to hear these tunes again with the tweaks and improvements…they might have a ‘garage-rock’ sound to them, but the overall tightness in About Time has certainly shown that they’ve spent a considerable amount of time in the studio too. Considering the name of the album…I’d say just on the border of ‘too much’ time for the El-Dorado based three-piece!

So maybe it all took a little longer to get recorded & put out than they would have liked…it’s here…About Time…and besides, isn’t it like that for all of us? AND…when the end result is getting something that captures the vision and sound of a band as you’ve always pictured it sounding in your heads…well…that’s worth waiting for right? From where Age Of Man started with Ebeneezer way back when, it was completely rad to hear them tighten the corners on their loose-feeling music and put out the record I can only imagine they’ve been wanting to all along.

Awesome it was, to head back into the live-sound of Age Of Man, recorded so strongly. It begins with the punched-up “Gimme A Sigh” – a tune that has single written all over it. Guitars cut through the air from every angle and the drums come out ready, willing and able to take on the complexity of this opening cut. It really is a confident sound created by Age Of Man – they own their badass & rad-rock completely.

The first of the new-tunes on About Time, “Blind” takes a slide guitar for a wicked run…you can just hear the strings all bending away perfectly finding their way to the right notes and riffing it up with outright passion overtop of this clever stop/start beat. The guitar sounds around the 2:15-2:20-ish mark are basically the musical form of the exact reason I do what I do – what a SOUND! I’m honestly not sure if it’s even repeatable…there might be a couple of terrifically happy accidents through the amazing tones that come from the guitar; personally I don’t care how they got there…I’m just glad they EXIST when it comes right down to it! First new song from Age Of Man has certainly got me excited for the others to follow – “Blind” has a wicked amount of crunch & deep, deep hooks to pull you into the sound.

Rolling back through their past & updating them into the present, the middle of About Time is largely filled-out with cuts from the Ebeneezer EP. Solid bass-tones fill “No Woman” to the brim around the crisp & clear guitar, styled-up vocals and steady beat. I’d say it’s a healthy mix between The Grateful Dead and Pink Floyd… Keeping the bass rolling along, Eric Stone puts the smoothness into “You Sea” and really puts the blues influence into this rock music of Age Of Man. “You Sea” has that kind of wonderfully-loose feel to the way the lyrics come out…you can hear that this would be the perfect song for Benson to talk & sing-out anything on his mind in, pump-up the crowd…or maybe just not even sing at all at times and just let the solid groove take him where it may.

“I Found You,” at least for my ears…probably couldn’t have come out ANY better this time around. Not are the guitars from Matt Benson some of the craziest and best you’ll hear recorded this year, but the surrounding bass from Eric Stone and steady beat from Brandon Borden have really gelled this track perfectly together. Letting Benson wander wherever in the hell his guitar will take him, the approach and attack on this performance is astounding, straight-up. I know I’ve been on and on about the movie Frank in a recent review of the band TKO…but this is like the rock version of that band of my big-headed buddy. Both “I Found You” and “Whatchado” still manage to retain their looseness within very coordinated & complex parts. Like – listen to the amount of shifts & changes Stone makes as this cut rolls through! The last minute of “Whatchado” becomes a solid highlight with an extremely tight-solo bringing out the best in Benson at his most focused & controlled as opposed to the best of his psychedelic-influences taking hold of the massive solos in “I Found You.” In any event – these songs do end up sounding tighter, but not out of place in amongst the new tunes; they’ve updated them perfectly in production to match, and have four brand-new tunes that carry the vibe right on.

Here comes one of them now! “Been Stuck Blues” is a wicked run through a rock-blues style, more so than the rest as the title implies. Short & stuck right where they want to be, this track grooves & rocks with the blues-element running throughout but never fully giving in. For being ‘stuck’ anything, this track does nothing but MOVE ya! This is an absolutely killer addition to the new line-up of songs that make up the rest of About Time…I appreciate its shortness…but damn do I want MORE of this right away every time I hear it come on again!

I’m a big-fan of FUZZ. Honestly…I don’t have much of a choice…I’m covered in the stuff, so it was either learn to love it or be fully consumed by it slowly taking over my skin and hate life. But in this particular case, I’m talking about guitar-fuzz…and just LISTEN to the sound & tone that Benson gets going on in “Better Half.” Definitely one of the best of the new tunes; recorded, produced & performed as immaculately as you could ever hope for – the mini-explosion just before a-minute in that will repeat and come back later on as the instruments drift in and punch back…just an absolutely awesome idea carried out with flawless execution…NBD! Age Of Man have found themselves some real moments on About Time – another notable being the re-cut on “Needles In Hay.” I freakin love this tune…it sounds like Benson sitting atop of a tiny amplifier barely on and just riffing this one out for all to hear – only the mic is set up way across the room and just picks him up enough to get it in the mix. Really, really well done, smart recording on this tune; so radically different than the rest of the album that it can’t help but pull you in and creates a perfect set-up for the final tune & last new-song on the record, “Sun & Rain.”

Age Of Man creates a highly memorable ending by switching up the vibe just a little more on this final-cut. Incorporating a tinge of funk and grunge in amongst the blues, the rock, the psychedelic…”Sun & Rain” could easily be the titular synonym for ‘we just went ahead and added like, EVERY sound and everything we do RIGHT, we added the kitchen sink even.’ I’d also go as far as to say that this last song also really shows some growth, progression and passion – and that it’s still on the rise for Age Of Man as far as their career is concerned. It’s an awesome final dose of Age Of Man’s powerful new output with a collection of ten wild songs that will really hit the mark for blues-rock fans. About Time indeed!