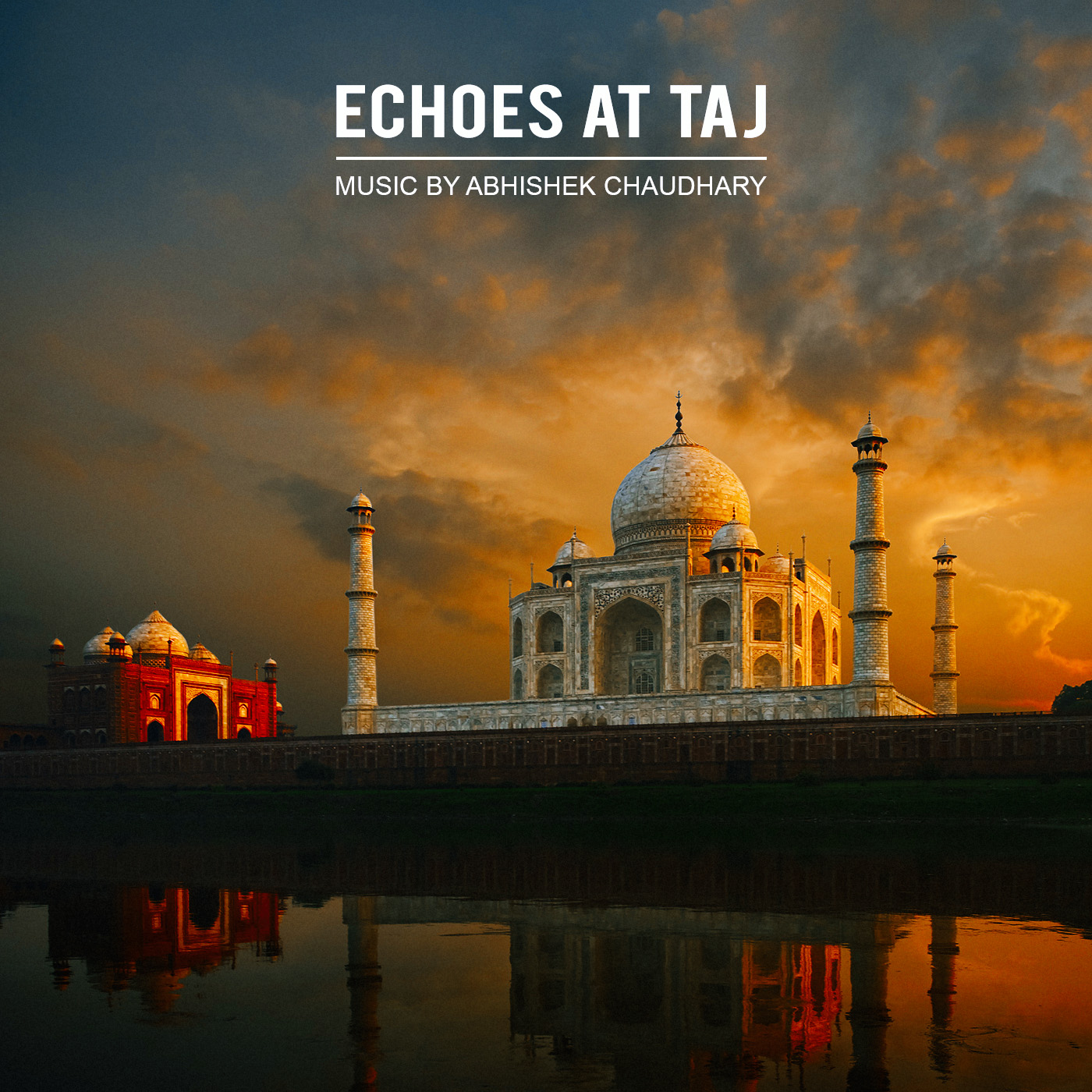 Depending on how widespread & diverse your own musical-taste might be…you might miss out on an album like Echoes At Taj by Abishak Chaudhary…and that wouldn’t be cool. His mix of ambient, new-age and orchestral sounds seem to know no limitations, leading him into atmospheric rock & pop textures just underneath the surface of some, and on full display in others. Vocals mix into the largely instrumental arrangements from time to time…as do nature-sounds and various ambient-elements in the surroundings of Chaudhary…the album itself is like stepping into the wild & vivid imagery inside another person’s dream. Echoes At Taj is stunning, sparkling, emotional and much, much more…it’s a true journey through the beauty & moods of music…and the amount of versatility, tone and atmosphere is a true achievement on this record.

Like the beginning to that dream, “Awareness” starts out gently as an intro before the organ-led melody of “Thirst.” Though much of the album and song itself will go on to be largely instrumental overall…the opening tune opts to go for beautiful harmonies that sound like they’re bouncing off the reverb of an endless-hall…the way they find themselves drifting through the song is gorgeous. For you mainstream-fans wondering how you’d find your way in here…a track like “Thirst” actually puts a lot of similar genius into the music, vocals and melody as you can find on the later albums from Radiohead. “Thirst” has a vibrant energy to start the album up after the “Awareness” intro…and some really brilliant combinations are right around the corner to come…

By far and away…even after listening to these stunning compositions and arrangements multiple, multiple times over…”Enlightenment” is absolutely one of THE BEST songs on this album. For two minutes it almost stays mired in the dark…before giving way to a beautiful second-half full of light and bright piano-keys. The beginning melancholy & mystical-sounding piano that leads throughout the first two-minutes is something you HAVE to listen to through headphones…the surrounding raindrops and nature-sounds are laced so extraordinarily-well into this song it’s mind-blowing. Textures, ideas and transitions like this are perfect examples of something I could easily listen to on repeat until the very end of time; SO GOOD. Stark-raving-beautiful.

Piano-tones and beautiful, enveloping atmospheres combine…first through “Birth,” which leads to a flawless transition into “Existence.” I REALLY like what Abhishek Chaudhary is doing with his music…this is a tremendous victory for the clarity of sound, atmosphere and soul-inspiring tones on a record. The misty, hazy, dreamlike & angelic melody that consumes the sound of “Existence” is just purely audio-genius once again. The vocals once again reappear…every bit of an instrument as any other sound you’ll hear happening…they’re so far away (purposefully) that you can make out the melody and nothing more. Blending them into the music perfectly – “Existence” finds another gear towards its middle/end & continues to find new ways to sound uplifting/inspiring along the way of the journey in this one tune.

And so too, of course, is true of the album. Echoes At Taj flows through a river’s worth of changes in course and direction, all with complete ease and comfort on the listener as it plays through. The piano-led melody of “Sensation” once again backed by bold nature sounds, birds and ambient thunder & lightning in the distance…this arrangement builds itself to a massively-inspired and huge ending comparatively to whence it came from. Seriously awesome stuff here…and as it crashes down to its final ending it sets the stage for the dramatics and sweet, forlorn melody of “Manifesting.” I’d be the last guy to say I have any knowledge of music as in-depth as Abhishek Chaudhary does…but in both this tune and another of my favourites from before, “Enlightening” I felt there were a few minor slips here and there…nothing all too noticeable for the most part…very minor if I’m even correct in hearing them at all…and if they are there, it’s simply because these songs are outright magical and have both been under intense scrutiny through the microscope of my music-mind. Overall, they’re both massively stunning; “Manifesting” really takes hold of a beautiful, fragile-melody and really lets it build and build and build in such a way it’s like listening to a flower blooming and celebrating once it’s all opened-up.

With a misty-version of Beethoven playing a major role in “Transmission (Moonlight Sonata)” – this idea and approach is a mesmerizing one. Frosty, icey, dark and cold…it’s as if Tim Burton himself commissioned Abhishek Chaudhary to create a version of the song as he’d like to hear it. This is one of my personal favourite songs in the classical-instrumental world of music to begin with; and I’m not even kidding when I say this might just be my new favourite way to hear this amazing composition. I absolutely loved this song from its start to end and the unique, dark and completely haunting-vibe that Chaudhary has put into the atmosphere of “Transmission (Moonlight Sonata).” The eeriness takes a stiff turn towards an even more intense feeling as the atmosphere of “Womb” goes on to surround you entirely.

“Suffering” is another completely genius & sparkling tune. With a sitar-led melody-line and intense-atmosphere in the music…this song sound straight-up like it’s right off of The Cure’s Disintegration album. Not that it takes anything they’ve done as its own…nothing like that…but with the incredible wind, rain and thunder sounds so cleverly placed, spaced and mixed-in throughout this song, it sounds like it came right from the same record. Its ‘deep’ sounding…to make both a pun & a point at the same time… The assembly, structure and life to this particular tune might be second to none on this record…”Suffering” is a beast of a song and incredibly magnificent from head to tail.

Delicate, mild and gentle…”Attachment” starts out with flute and piano notes combining to form an almost-curious sound…like something is once again about to be revealed…or a door being pushed-open to reveal the sunlight after being locked in the basement for the past twelve-years. Well…okay…nothing that creepy I’m sure, but you get the idea. Once again beautifully combining nature into the music, “Attachment” is as gorgeous as a floral arrangement; with another smart transition to change the music-up once again, its ending allows for the ears to immediately accept the brightened-rhythm of “Appreciation.” I almost don’t even know what to say…it SOUNDS like an audible-thank-you! It really has a gorgeous, smiling-tone to the entire song…the drum-sounds and percussive-elements are right-on kinda-awesome.

What I can’t tell you for certain is if I think it was a poor-choice in selecting “Joy (Chopin Nocturne Op.9 No.2)” or if I’m just straight-up not a fan of Chopin. I’d have to say it’s the case of the latter… Abhishek Chaudhary has proven himself plenty to me upon this ONE record, whereas I’m STILL waiting for Chopin to step-up to the plate! I will admit…it does seem like an odd-choice…but it IS on what you might also describe as an ‘odd record’ – so maybe it’s just me…wasn’t my thing.

So I waited through the split-second silence in hopes that the genius-ideas and creations of Abhishek Chaudhary would come to life once more before the album completely ended…and I got my wish. With another of his strongest tunes for certain…the amazing feeling and comforting-vibe of “Passing Away” is like a diamond-shining beautifully right in your face. If this is what “Passing Away” is supposed to feel like in any way, shape or form…well…looks like I found the way I want to go out…

A really fantastic, captivating set of songs and sparkling performances…if you love THICK, RICH and seriously-FANTASMICAL (that’s right I said it) atmospheres with a layer of frost, mist and mystery within their musical-bones…these songs, and in turn this album…are certainly for YOU.

Echoes At Taj was most-certainly for ME…this was completely awesome, all the way through.

Find out more from his official page at: http://abhishekchaudhary.com