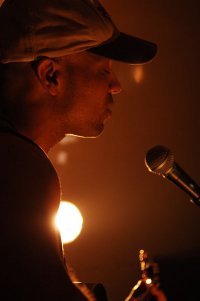 This is actually a very interesting sound.

I won’t lie to you…upon a first listen to these collected singles from Waynb, I was nearly left unconvinced…there was something amiss in that first listen. After additional spins through these songs, I realized that what had to have been amiss in that introductory experience had to have been my own attention somehow. You all know that’s not like me…and believe me – I was just as surprised to hear this music resonate as strongly as it did with me as the songs began to repeat.

In a sense…I still don’t really know WHAT to make of it. I started my time with Waynb on a song called “Be The Man,” and again, on the subsequent listens I found more skill here than I had at first thought. The tune is made in an astonishingly honest way. Sound-wise? I mean…I can TRY if you want…how about something like Dave Matthews meets Superchunk meets Tracy Chapman meets Jane’s Addiction (acoustically, of course…)? That would make NO sense to me if I read that dear readers…I give you full permission to strike that from the record if you like. Waynb has a very interesting and likable quality in his tone and delivery…and I was actually stunned to hear on those second & third spins through these singles that what I had at first heard as a potential weakness, was actually a MAJOR strength for Waynb. Is it going to sound note-for-note perfect? No! But is it going to deliver an emotionally impactful sound? YES.

Then I hit up a song called “Fillin Up Their Pockets;” and for some reason…I think this was actually a little closer to what I was initially expecting. At this point in a listen, if you went the same route that I’ve gone – you’d wonder after listening to this song if Waynb is closer to Andre 3000 with an offbeat & innovative rap tune…or closer to someone like Beck of all people, creating a bizarre alt/rock track. In any event, no matter what Waynb can say about these comparisons…the guy is keeping some pretty good company from the way that I personally hear it. It’s thought-provoking through the lyrics, killer last line as it fades out…I still don’t know if I feel like I have a sense of really WHO Waynb is through these first two singles…so let’s go hit up a third!

And how appropriate! We’ve got “Wayne’s World!” Surely…there MUST be something in this song that points the way to Waynb’s real musical identity…you know…whatever his ‘constant’ sound might be! Excited? Me too!

Ok…wait…what? Now I’ve got myself a track that’s somewhere in the middle of the Barenaked Ladies “One Week” and Third Eye Blind’s “Semi-charmed Life.” What is going ON here? With light & melodic vocals coming up in energy and bursting into sickeningly-sweet POP…the constant departure from one sound & style to the other is a large indication that I either need more sleep than I usually do, or there literally is NO predicting which way that Waynb will turn next. Single releases might just be the way to go for this particular artist…what the heck would a full album include? Each of these singles are so different from the one before…and each really DO make for an enjoyable experience…but I’m not hearing too much in terms of a thread to tie all these songs together.

Even Waynb changes his vocal style & sound from song to song. It’s an incredible thing to be able to tackle so many styles, genres and different songs…but I’m not so sure that I could pick two Waynb singles out of a random playlist if my life depended on it, and you all know these ears to be fairly reliable. Listen to “Chiki-Cha” aka “Under The Maple Tree” and you’ll hear Waynb onto something that sounds like Tv On The Radio meets Mystikal…or maybe Tricky. This one actually took me the longest to get into, but also proved over time to be one of the most enjoyable. I think it’s incredible that I haven’t just been able to pin Waynb to one particular sound or influence on any given single; he’s always representing a combination of sounds put together in a unique way that he can certainly call his own…on each and every track apparently!

And it’s NOT like Waynb would try to HELP me out with that as I pushed play on “Stop And Go,” which is certainly a funk-rock song. Cause you know, we’ve already had so much of that already from Waynb… Unreal. I know that singles allow us all to test out different directions, but this is pretty much amazing when you realize just how many different styles and sounds Waynb has gone after…and achieved in these stunning recordings. I might be lost, I might be confused – but make no mistake, Waynb has absolutely got me listening. If not for the sheer curiosity of what he might come up with next – for the fact that this guy has tremendous talent for all-things-music. “Stop And Go” really shows a different side of him, even though we’ve already experienced many; this one rocks hard and he kicks his own vocals into an overdriven-level by the end of the song and really maximizes the use of those lungs in a great way.

The last track I got my hands on was “No Ceiling,” which almost starts out with an “All Along The Watchtower” feeling from the guitar. It strays from the comparison as the vocals hit; all in all this is a pretty damn loose song. It’s bizarre…there’s a complete mixture in this song…at times Waynb seems like he’s lost his confidence, and at others it’s like he never left and he’s putting it all out there in full. It’s a hard one to explain…I suppose…after what I’ve heard from Waynb already and the limitless creativity he’s had throughout these singles; I’d have to admit – this one almost sounds too easy for him.

And I might be FAR from wrong on that last point, giving me a genuine shot at redemption here at the end of this review. If you look over the list at Soundcloud…you’ll realize that Waynb is busier than the Rolling Stones were in their prime…or their second prime…or third…or combined! Really! I could not believe the sheer incredible amount of scrolling it took to reach the bottom of his catalogue. I’ve hit them all up once just to continue my venture into the weird-world-of-Waynb…and if you REALLY want the full picture of what this artist creates and is capable of…I fully recommend letting “No Ceiling” continue on into the rest of the playlist so you can uncover this musical-mystery for yourself!

The best of luck to you all! Here you are – this is Waynb’s Soundcloud link: https://soundcloud.com/waynb