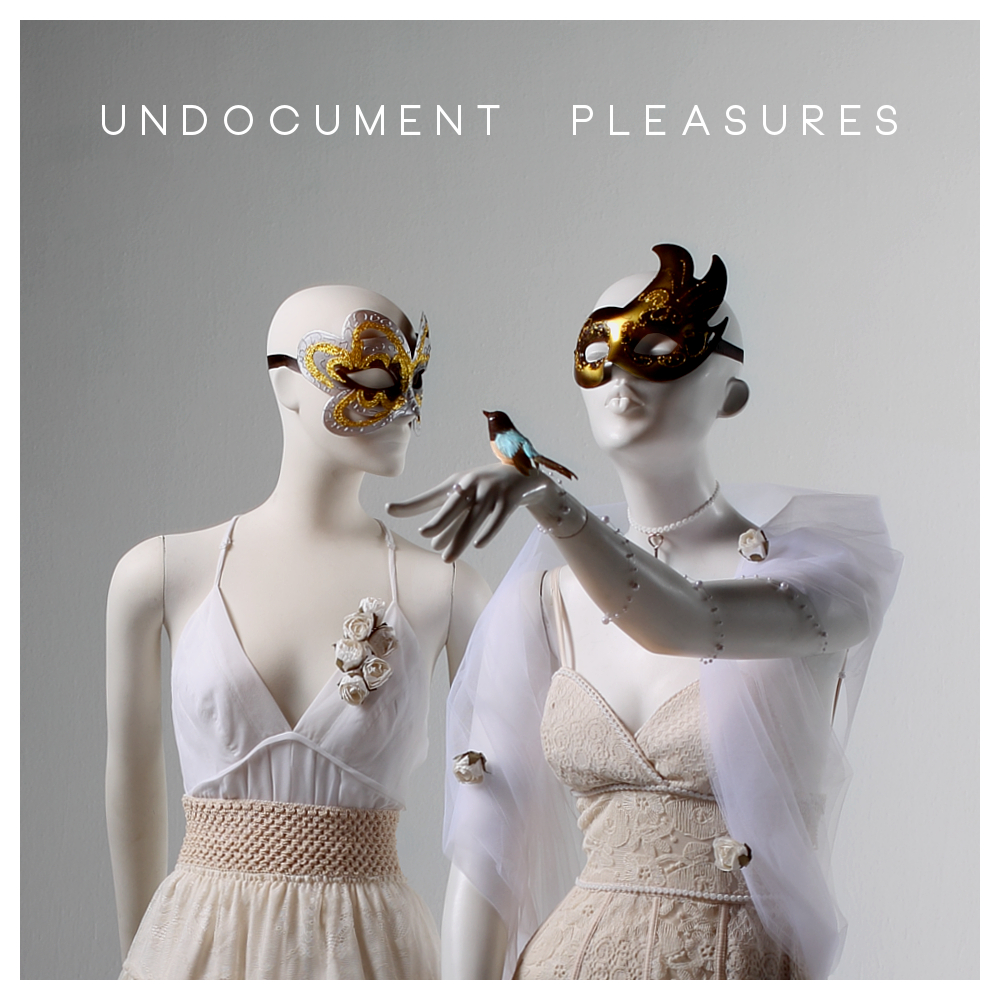 I don’t know about all of you out there – but I definitely know what I like as far as electro is concerned. Brian Pampaselle – the genius behind Undocument, is making all of it – that’s right, ALL the things I like – and more on this second album, known as Pleasures. Apt title, as there are many; this is album that rolls along with the very best of the well-oiled music machines.

Checking into his social pages, inlfluences and likes…there’s no reason I shouldn’t dig on what Brian has come up with. Artists like Flying Lotus, Brian Eno grace the list, as do Prefuse 73 & Boards Of Canada…and this is all music I’ve digested thoroughly over my years of musical consumption. What I really dug on, even before hitting play – was the subtle addition of some key names like Peter Gabriel, The Mars Volta and Radiohead. Certainly the tie-in argument for electro can be made easily with Radiohead – but these other two listings, fairly unique from the rest also gave me a large indication that perhaps Brian listens to sound much like I do myself, in such that we listen to a staggering variety of sounds to make us happy…

There was another confirmation that I was in for something special, again, tucked quietly there on the Facebook page for us all to read…something there that truly shows a commitment to the way this album was written. We all have time in the shadows…there’s a time in life where we all have to “wake up” and step out into our own spotlights…lest we rest in our own versions of mediocrity for the durations of our lives. Undocument releasing this album Pleasures largely reflects that step Brian has taken to break free of the background and put this music at the forefront where it belongs in his life, and yours.

“With my second album, I really wanted to break out of the mindset of ‘background music’ and do it a little more traditionally this time. I just wanted to put all these new songs front and center.” – Undocument Facebook Page

Again – I can’t speak for you all – but that quote right there sold me on this album. I knew I was in for something good. I read a Dave Grohl (The Jesus of SBS) quote once that made a similar reference to songwriting…something to the effect of, once he had written a verse, then written a chorus, he would chuck the verse and the chorus he just wrote became the verse. And after that, he’d write an even bigger chorus, creating the huge rock sounds we know and love today.

That spirit of…almost like…how can I out-do….MYSELF…is all over Pleasures. Let me tell you about that time I was listening to the new album by Undocument where I got to track #13 – “Threadbare” and my mind was blown for about the 13th time in a row…

That is a seriously incredible, must listen-to track, invoking a sense of one final influence I can infer for you all, one unlisted but one that to me has quite a lot in common with Undocument, which is Tortoise. Tortoise has always made their music include a wide range of sounds, taking you all over the map, finding beautiful new melodies, often making them with lesser used-instruments in creative ways to get their unique sounds. Tracks like “Threadbare,” “Promises Kept,” “Listless” and many others actually possess these same outside and jazzy qualities, the latter song certainly also possessing that strong influence of Prefuse 73.

It’s a dedication to diversity in sound, coming together in all kinds of ways that truly work 100% all the way through, that should be applauded. And should be freakin NOTICED. I’d be shocked if I wasn’t hearing Undocument songs fill many of the Hollywood soundtracks of movies to come in our future; these songs will make you feel something…they’re perfect for those movie moments we truly love the most – the ones that represent our lives.

If this seems BACKWARDS to you…this whole review…starting at the middle and going forward here to speak about the beginning of the album…I assure you it’s not. I’m doing my best here to send you this now not-so-subtle-message about the strength of this album… Ending on tracks like “Stars And Sky And Spun Gold,” which is beautiful enough as it stands, but the final track “Eastern” nearly crushed what was left of my soul and left me weeping in the corner. As perfect of an ending to an album as you can get if you ask me – this is one of those truly amazing moments in music for me, no bullshit. It reminds me of that often hypnotic element that Mogwai can often add into their space rock and brings an absolute sense of “the end” to this album. Once it’s finished, there’s no doubt you just heard the final piece of what Undocument had to say on Pleasures.

In fact, the ONLY thing you’ll doubt at all most likely, is yourself. While you’re listening to this album you’ll hear yourself call out – “It’s not gonna get any better than this track!” right away, listening to the slow-burning opener “Elegy.” Within five minutes, you’ll eat your own words as you head into “This Lullaby,” a song that features vocalist MaQui in a song that has every element of a standout and the perfect pieces in place to become a hit song or video. MaQui is a completely amazing voice that adds so well to this song that, if you were to accuse Undocument of ANY misstep on Pleasures, it’s simply that you’ll wish you got her here on a few more tracks. This is much more of a comment on just how GOOD MaQui is and much less of one against Undocument obviously – but count this certainly as a vote of hope for future collaborations.

“Oh no, wait…THESE tracks are my favorites FOR SURE…” you’ll say…

Tracks like “Scattered Things” and “The Bird Feeders” keep things incredible during the first third of the album. I like the atmospheres in both, and again appreciate not only the diversity in the sounds between the two tracks alone, but the way that Undocument seems to make it all OK. These change-ups become acceptable each and every time; and the ONLY way to achieve that is to truly write amazing song after song after song after song. Brian Pampaselle – sir you have me thoroughly convinced. I think it might have actually been “The Bird Feeders” that had done it…it’s such a beautifully strange combination in sound that I just couldn’t ignore. Leading into the emotional powerhouse that is “Hiraeth” – I mean truly, well into the third of this album on those first listens and I was absolutely scratching my head, almost ready to take bets that Brian couldn’t keep this up forever.

“Pulses” begins the second third of this album in ways that just can’t be ignored; this is the electronic genre at the pinnacle with an absolutely killer stomping dark beat just made to make you MOVE. Surely, it HAS to be that track that’s your favorite right? Nope…you’re hooked on the vocal sample used in “Departures.” Well I can’t say I blame you, I am as well – that is one seriously beautiful track.

You see where this is all going, where it has gone, and where it will definitely go again. I’ve said it before, hopefully many times this year – but 2014 has been THE year for independent artists out there. Absolutely fantastic and inspiring music is being made by some immaculate and undiscovered talent out there and I’ve certainly been sold on Undocument being included in this impressively growing list of present day visionaries.

Pleasures is honestly, to put it mildly. Brian is probably just too humble of a guy to have titled it as it should have been, Immaculate Musical Treasures.