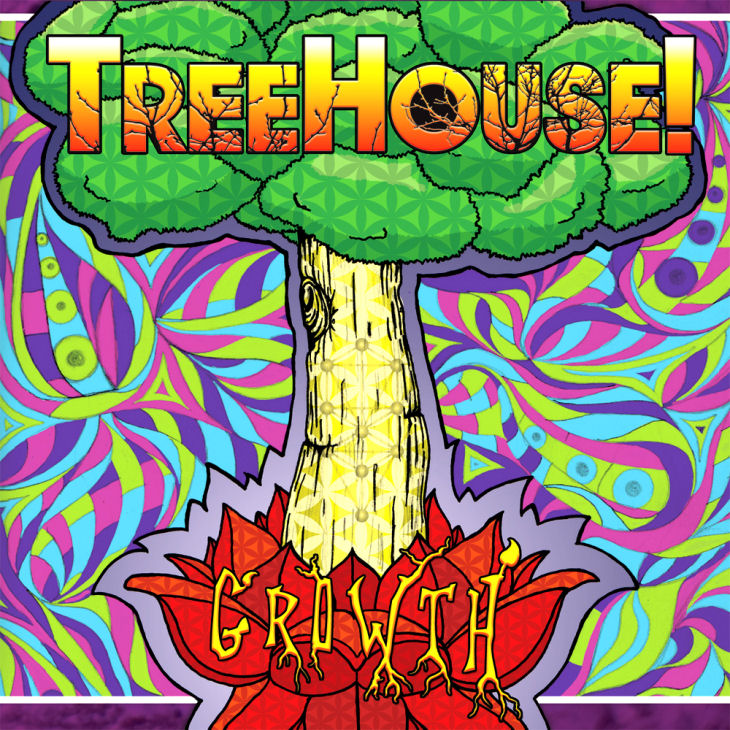 No joke – this album starts off on the RIGHT note!

I’ve actually been waiting in anticipation for this album release by TreeHouse! and instantly I find exactly what I had been hoping for – consistency in their character and quality in the music. Now, we all know that expectations like this can often lead to heartbreak – but let me assure you that was not the case on this new album from TreeHouse! titled Growth. From the moment I pressed play I knew that my ears were in for a real treat with this experience into a wicked blend of rock, funk, reggae and overall awesomeness…..

Do it. Go ahead and push play! “Call To Arms” the opener – is a perfect track to start this off. TreeHouse! has come out attacking with a slick and funked out groove that sets the standard for the quality you can expect from that moment and forward. While I’m sitting here and listening for the third or fourth time straight – my jaw is dropping from the absolute authenticity in their music. You can hear it in songs to follow like “Ziggy” and a personal favourite of mine – “Blessings.”

I’ve always been a huge fan of the melody in music and no matter the genre it can always be supplied. Is there music without melody? Not so much for myself I don’t think. Then you listen to a track like “Blessings” and it literally has it ALL. If the melody in the track wasn’t getting to you already – just you wait til they bring the horns in. Against the beautifully played guitar and perfectly placed reggae-style vocals courtesy of Jeremy Anderson – this track works on so many levels and so too does the album.

I can’t go on record saying any single element of TreeHouse! stands out over any other – that would simply be false information. Matt on bass has not only a tremendous natural feel but his playing is so smooth AND appropriate! You’ll hear what I mean – bass-line after perfect bass-line – this is a man that knows his place in this band and certainly in this genre. It’s nearly an understated part of every track on Growth but it presence is noticed and necessary in each of these tracks.

The band themselves truly know their direction. Between the tracks of the album allows the silence necessary to realize just how well together this music really is. And the trick to any great reggae influenced band is to make it sound effortless – like they’re playing at the end of your couch. Listen after listen – this album will certainly hold up against the race of time because of that very element. I hear music like this and think to myself: “You’d have to be a pretty cold hearted person to shut this off or even turn it down.” I stand by this.

Jeremy Anderson’s solo work in “Call To Arms” or “Healing Rock,” and of course “Endless Cycle” and “Darlin” are immaculate. Skills are demonstrated and the melody never leaves the band around him. Often at times the solos themselves sound like they’re from a different influence than the main vein of the song, allowing for a unique sound and triumph in songwriting. His vocals go with the music a staggering 100% of the time and are completely spot-on.

Again – there’s a ton to enjoy on this album and certainly for people outside the reggae genre as well. I mean – at the end of the day, that’s me! And if you could see my head bobbing up and down listening to the music here you’d be inclined to assume otherwise!

These are assembled songs – TIGHT in every respectable sense of the word. Trey keeps a steady beat and uses great tones in his kit sounds – he clearly knows what he wants to hit when he is sitting down with the kit. “Vision of a Lion” is a great example of what he can do and bring to the sound and perhaps on this album, a true reflection of many of the ideals and style of TreeHouse! Did I mention that I LOVE these solos that find their way onto each and every track? Kinda? Okay – so a little more on that then… I’ll say this – instrumentation has been sorely lacking in much of today’s music; what used to be verse/chorus/verse/bridge/solo/verse/chorus/chorus has been shortened dramatically for many, becoming verse/chorus/verse tracks – static and undynamic. TreeHouse! have managed to create the virtual opposite – take a listen at how they begin to close the album out on the second to last track “Wildman Rastafari” and you’ll understand what I mean right away. TreeHouse! pushes the boundaries on each of their tracks but retain that authenticity entirely intact along the way. Each track not only sounds like them – it sounds just the like personalities behind the music – inviting.

That carries not only throughout TreeHouse! but all the way through their party line. Their manager Jen is a pleasure to talk to – I’ve been incredibly impressed with her passion for this band and having now digested this album thoroughly and repeatedly – I can certainly understand why. Originally during the written interview we did with TreeHouse! she had sent me the acoustic performance of “Young One” with Jeremy playing a solo rendition. My first impression became my last as this closed out the album.

While that solo performance will always have a special place in my mind from hearing it first and having it be that introduction into the musical world of TreeHouse! – I can certainly appreciate this full band version of “Young One” to be more than just different; this is a representation – a metaphor. It closes the album reminding us that this is a cohesive unit – “surrounded by the sound.” This album has a tremendous amount of focus and heart – one I truly enjoyed listening to repeatedly. It plays on like a party unto itself – one that TreeHouse! has certainly recommended that you join in on. I do too.

Check them out further at https://www.facebook.com/TreeHousetheBand and at their main page: http://www.treehousetheband.com/ Support this chilled out band from Myrtle Beach and check into what they do. I’ve repeatedly pointed to them as a shining example of what doing the hard work will earn you out there in internet-land and the live show forums. This album, Growth, is definitely another example of what you can achieve when striving for excellence in your craft.