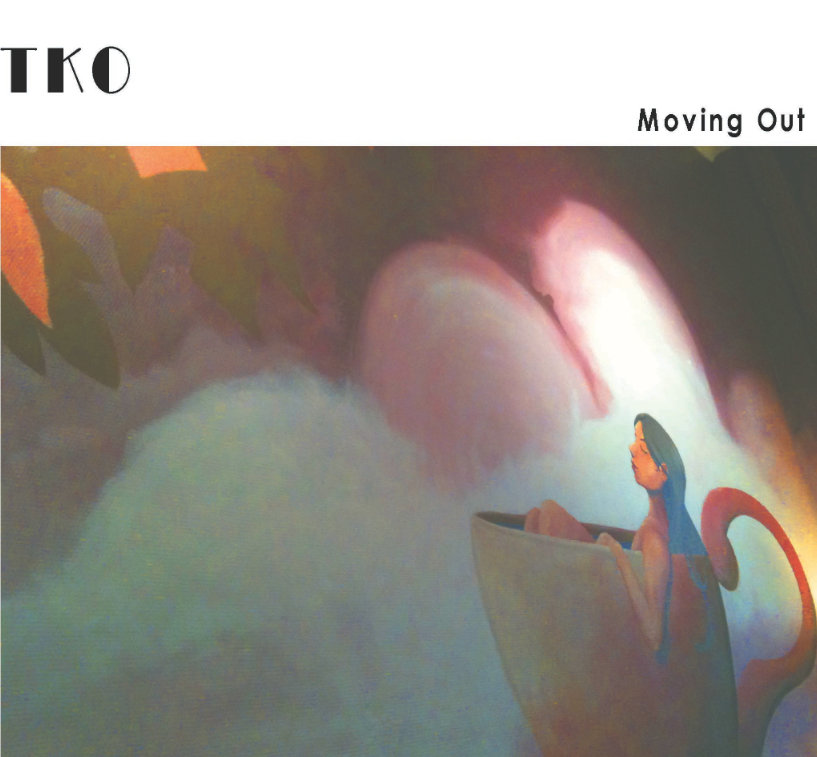 It has been a wonderful second-half of 2015. The latter part of this year was a real indication and measurement for some of the impact we’ve made over the past three years doing what we do; we’ve seen many of the bands/artists from as early as our first-days in print come back with new albums, EP’s, singles…it has been blissfully inspiring to say the very least. And even though it was only about four or five months ago when we were first introduced to the Hong Kong-based band TKO – I’m already looking forward to their return…their Tung Chung May Day EP that we reviewed was incredibly unique, inventive and established that necessary impact to retain memorable-status in my goldfish-esque memory.

They fit into the ‘Ambilectro’ genre…which to be truthful, I’m surprised I haven’t read or seen somewhere before…that’s about the first ‘genre’ name I’ve been able to get behind in about twenty-years – and it completely fits the tone, mood & music of TKO. The three-piece of Anthony, Joon and Stefan make their ambient-electro grooves with real emotional depth, often providing a rich-textural canvas for guest vocalists to work their own magic upon. This recipe for unique combinations and diversity makes itself known on the new Moving Out album right away in “Falling;” a solid-blend of drum’n’bass with gentle-electro elements layered-in and gorgeous vocals that sound completely poetic. The beat is inviting, the singing is enchanting…”Falling” absolutely works as a fantastic-start to this new album from TKO.

“Rising” is another achievement early-on in this record. Love the way the piano-intro rolls into the smoothest-of-smooth bass-lines before breaking way into synth-chords that all come together in a jazz-like fashion. Very chilled out…like Zero 7 or Lemon Jelly in their music sound/style… captivating…but it has an audible way of virtually slowing time down around – and that’s the real magic here. Every moment is planned out with precision…yet the end-results flow naturally and the actual sound of “Rising” is one built of such an inviting-nature that it will put your mind, body & soul at ease. The three-piece of TKO takes this moment for themselves…no vocals on this instrumental…and even though they’d certainly work on this tune – I think they’ve made the right call; when you hear the editing up-close in the ol’ headphones you can really hear just how clever TKO is when it comes to their production.

Now…with that being said…as much as I like an instrumental-tune myself – I’d be lying to ya if I didn’t say just how much I think of the brilliant title-tune on this album. “Moving Out” was extremely interesting to me…I honestly wasn’t sure 100% that I fully ‘got it’ or if I really even liked the choices made in the vocals throughout the first time through. By the end of the day, I was hooked on this track like almost no other on this record – and I came to absolutely love the choice made in the singing-department. The hook itself and the way she sings it…is completely genius…and I’m surprised that it took me by surprise. On my subsequent listens through it, and realizing just how memorable this vocal-hook really was…it was almost a forehead-slapping moment of personal defeat – how could I have NOT heard that on the first time around? Whatever…I’m there now…and that’s all that matters. Love, love, love this title-tune.

Subtly-mixed but highly-experimental in sound, the combination of movement & rhythm on “RF78” works its way through its patterns and various electro-elements at a solid-tempo & pace; with the synth-bass groove staying static once it begins…this track sounds almost like it’s on a constant repeat – unless you listen real close. When under the microscope, “RF78” has a magnificent amount of substance and changes in direction in sound…it’s really unique in what they’ve ton in how much this actually changes but how little you might notice it at first.

“Underlund” was also another immaculate experience. As beautiful a set of vocals as you could ask for – this is delivered in a really confident & gentle approach…she audibly sounds like diamonds sparkle. Another inventive rhythm and beat from the reliable three-piece of TKO, “Underlund” is a transcendent composition that floats through dreamlike atmosphere, progressing, thickening and building all along the way. Amazing electro-elements fuel the final minutes of this song…again the vocals and singing standout as not only unique, but profoundly captivating. The last thirty-seconds, “Underlund” pulls it all back and strips down the sound to a completely beautiful ending to a track that truly deserved it; perfection, all the way through.

Bringing back a playful sample into the music…TKO heads back towards a sound closer to Lemon Jelly’s neighbourhood on “Almost Finished Now.” The balance in this song is staggering – I absolutely loved it and again think it showcases some of the real, innovative ideas that this band has in their production and writing. The way the vocals are set deep in the mix of the music…I loved it…you have to strain to hear every word in the sample…I mean…you COULD strain…that’s one way to listen to it I suppose. The way I listen to a song like this…is with an ear that understands the magic in a reason to return; so WHAT if you don’t hear every single word of the sample the first time around? Go back and listen again, you’ll catch more…or you’ll catch something new…that’s the beauty of music with layers and depth – it takes a bit to fully absorb it all…BUT…it lasts. The combined ideas of “Almost Finished Now” and on “Moving In” give me an all-out music-chubby – this style of layered vocal-sampling and sparkling, stunning electro-jazz ambience that TKO creates is powerfully moving. “Moving In” is like a brilliant combination of a broken call-centre station with a ton of connections trying & failing to be established…and all the while this track sounds incredibly-smart with its idea, mix & movement.

Honestly another of my favourite tracks on a record that’s already proven to have a ton of experimental-depth, raw-emotional & honest approaches to their music, was the first track to repeat itself in an entirely new-form, “Rising (Vocal) 2015 Edit.” It’s a much shorter-cut on the music itself, but the choice & selection to make this cut was made with a real vision for the sound – you can hear the focus. As a result, “Rising,” which was hella-smooth to begin with, becomes more akin to the smoky/sultry sound our ears constantly crave. It also marks the switch into the remix/bonus music-terrain of the Moving Out album…which for many of you, knowing the heights of creativity that TKO can reach…well…you already know that re-exploring their music can still only lead to good things. Like take the “Falling (FallingUpTheCeiling) Remix by Lekker Hondje” for example…a track like that is going to massively surprise you. At first it feels as though it’s about to wander too far off…that perhaps it had been deconstructed a level too-far…and just as your attention is potentially about to stray – Lekker Hondje puts the beat in firmly and takes the song to another level entirely. But these tunes mind you…in their remixed-form…they DO sound entirely like new-songs even in comparison to what you’ve heard already so far and in their original versions, which makes for the second-half of this record feeling like it’s completely new to your ears in every way. The dynamic mix of “Falling (FallingUpTheCeiling) Remix by Lekker Hondje” is an absolute stunner…loved this tune and what it does in its second-life here.

And clearly…Lekker knows what she’s doing. She’s been entrusted with the remixing of “Rising” once again on her “MelancholyIsBlissfulWhenImLikeThis” remix and takes it closer to the EDM/Dubstep atmosphere/vibe…all the while keeping some incredibly cool parts of the music roaming throughout the background. The beat she has put to this is audio-insanity; rubbery as all-hell and sounding like it comes with its own straight-jacket/madman combo…so you know I loved that. It’s frantic, scattered and wild…but all created and edited with intense professional precision. Consider me a Lekker fan myself. She goes on to remix “Moving Out” as well on her “ThatsWhyYouCloseYourEyes” version…which is definitely one of the more highly-experimental reaches on the record as far as the typical conventions of accessibility are concerned. It’ll be a tougher one to love for many, but it’s another highlight in the blissfully-incongruent & odd-mind of Lekker and her approach to editing, remixing and handling of sound.

Officially ending with one final original, the bonus-track “The Saddest Person In Tung Chung” was another oddity in the TKO collection…starting out in a completely over-layered set of contrasting-timings – it eventually bursts into a synth bass-groove and snappy-beat, accompanied by extraordinary vocal harmonies that sound beautiful. Despite EVERY reason that this final track shouldn’t work when originally mapped-out on paper, looked at, studied, discussed…somehow EVERYTHING about this track DOES work…but I’ll be damned if even I know why that is. This is as overstuffed as a gentle-sounding rhythm can be…notes are jammed and played with reckless-abandon, sometimes in tune, sometimes not…but it really adds a completely ‘free’ sound to this final tune. I think no matter how crazy the three from TKO could get in the background of the stunningly beautiful vocals, there was no chance for them to outshine her sound; but I think they actually recognized that fact, and they put in every effort to try! It’s like a 3-on-1 battle…but at the end of it all, it’s all four of these collaborators that come out completely victorious on “The Saddest Person In Tung Chung” – a song that could never be duplicated.

Outstanding music, ideas and effort from TKO here on Moving Out; the entire sound has its own orbit and the gravitational-pull of the creativity and uniqueness to your ears is certain to capture & hold all of your attention from beginning to end.

Support TKO and their innovative, wild & beautifully-inventive music at these sites below!