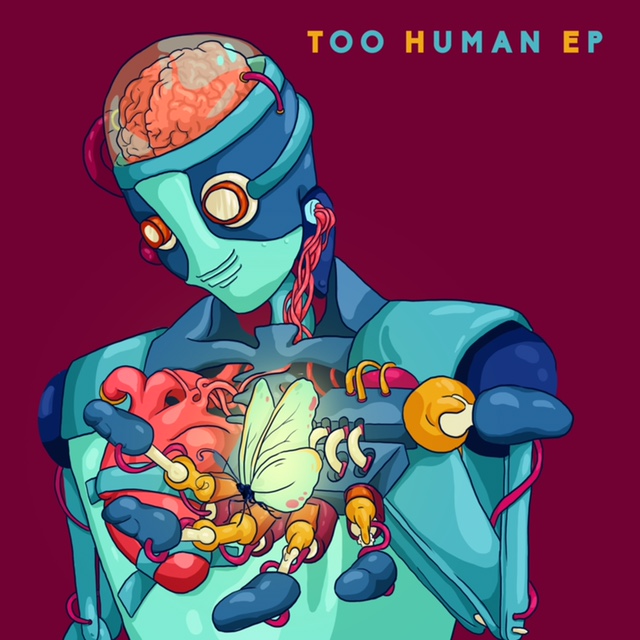 THE – Too Human – EP Review

How can you not just take a moment to marvel at the truly unsearchable band-name we’ve got here?  I hope you’ve got yourself some direct-links my friends…cause other than knowing someone who knows a guy who knows another guy’s second-cousin that knows where to find the music of THE – you might just have a hard time finding them if you’re searching it out through Google.  Either that, or THE is actually a part of EVERYTHING…you’d be astonished at how many results came up when I put THE into the search-engine…  Think about it…even The Ten Commandments still started with the word THE…maybe they’ve been around forever and we’ve just all taken it for granted?

Alright…all jokes & kidding aside – this is actually the debut EP from THE…so it’s probably safe to say that their first song lyrics won’t be discovered on a stone-tablet somewhere.  What you WILL find…if you have a listen…is a pretty damn vibrantly entertaining set of five tracks that actually showcase quite a bit of the beating-heart that drives this band’s music over the course of the Too Human EP.  There’s a great mix of innocence & indie-rock vibes all over this record…and in my opinion, what it might miss in perfecting or smoothing out this sound too much, it gains with authentic and identifiable personality in the music.

It’s got a serious realness to it…there’s effort in the music of THE – but it all sounds natural and entirely unforced.  Very much reminiscent of bands and sounds like you’d find in Soul Asylum, The Virgins or even Golden Smog, The’s first track “Concrete Hill” gets the energy up & moving quickly.  As the pulsing kick-drum comes creeping into the mix as it builds, “Concrete Hill” cracks open to reveal some rad combinations with Dinosaur Jr.-esque tones to their guitars and a confident approach.  You can hear the songwriting in the melody…there’s definitely a good understanding of what makes a hook a strong-one in this band.  They use their energy well in this first tune…that final breakthrough as they punch into the third minute really allows the band to let themselves loose towards the end of “Concrete Hill.”

You’ll hear what I’m saying though…calling this band a raw one isn’t an insult by any stretch.  A song like “Get In Line” has an appropriately matching grunged-up sound to its pop-inspired grind that has real edge and spark to its writing.  The vocals sound like a slightly-smoother Chris Cornell on this second cut – and really “Get In Line” has another set of sharp, sharp hooks to it.  If anything…this song is stocked so full that it might push a few people out that are looking for something a bit more predictable – but that’s a good thing where I come from.  I think the twists and turns of “Get In Line” actually speak volumes about the existing talent and future potential of this band…perhaps more than any other on this new EP.  Love the way they hit the spot around the two minute-mark…absolutely loved the guitar-solo towards the end, right before it sparks into a blazing-hot 1-2-3-4 count and rips into a punk-rock ending.  Their transitions are smart…their writing is inventive and unique – you can tell they’re most likely dudes that grew up in the 90’s like I did – but what I really like about THE is that you can hear the influence is there, yet everything I’m hearing is decidedly their own concoction of wild sound.  Extra points for the rad vocals and enthusiasm in the bass-line on “Get In Line.”

“Observable Universe” has a playful melody and narrative to its storyline.  Quite honestly, it’s one of the tracks I felt like I was also ready to welcome on repeating through this EP several times over.  I kind of wished that the chorus just had a little bit more punch to its transition into it…it feels like that switch is a real place that you could push off from strongly…and in some ways, I ended up feeling like I liked the idea of “Observable Universe” more than the actual song itself as is.  That being said, for the most part, I felt like it was just a really easy song to enjoy and dig-on quickly…there’s a real brightness to the rhythm and sweet ambitions of this tune…and really, no matter what I may have wanted more of in that aforementioned moment…I’m actually just happy to have this tune any way I can get it.

Limblifter, Matthew Sweet and Pavement all sound like they birthed a love-child in the combination of sound in “Sittin’ Pretty.”  This one was a tougher song to examine…you get hooked on the incredible crunch of that guitar pretty quickly, but you can also hear the vocals fluctuate a bit more in their consistency here.  BUT!  I think you also get some real highlight moments in their creativity and ideas here on “Sittin’ Pretty” as well…it’s kind of like the top-drawer in your house where you put all the stuff you’re not sure all goes together, but it’s also got everything you need at just the right time.  I enjoy the kind of reckless fun & abandon of the attitude and freedom in this cut.  Skillful ideas and combinations are swirl together radly on “Sittin’ Pretty” – methinks this would be an excellent track to see live.

The things I hear in the vocals are different than what I hear in the final-track “One Island To Another” – I can get the argument that they might not be the cleanest sound around town, but they’ve also got massive character and personality.  Very much in that awkward Dave Pirner-tone and approach…but still confident enough in the overall idea and knowing that THE is on the right path with their wandering ideas and roaming sound.  The final-cut of the Too Human EP starts with bright guitars and a pronounced melody that’s really supplied by the vocals…backing vocals sound great here, subtle but entirely perfect when they show up for support.  Good rhythm and sway to this tune, killer guitar-solo in this tune…and really, I dig the passion you can hear on “One Island To Another…made for a really satisfying end to this record.

Overall…I think it’s a little niche perhaps…I dunno…MAYBE…it’s really hard to say.  I know a lot of people that truly love a style & sound like I’m hearing in THE, but it’s also undeniable that it’s a bit against the grain of what’s currently happening in music right now.  That doesn’t have to be a bad thing at all…again, when you think of a comparison I’ve made already to a band like Soul Asylum…they went against the grain of everything else that was happening around them – they were on the fringe at the very best of times, but they went on to find incredible success.  I think that same potential for a dedicated fan-base and songs that will really resonate with people and become great parts of their memories built along the way is quite possibly in the cards for this band.  Great start here…unique ideas approached with sincerity and a lot of heart.

Find out more about THE at their official homepage here:  http://www.bandnamedthe.com

Tags: EP sleepingbagstudios The Too Human