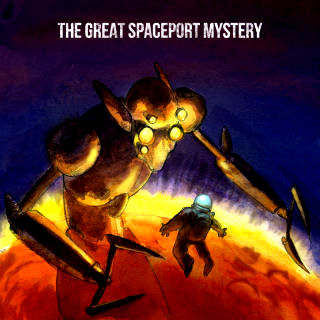 I thrive on multiple sounds and franticness in music when I’m not in a steady diet of acoustic music. I like music that can be challenging to the ear and make me listen for the difficulty in the assembly, the mix and the work in the writing behind it. No lie – I’ve been in that acoustic genre a lot lately…all the way into folk music accompanied with a massive injection of hip-hop into our world at sleepingbagstudios – so believe me when I tell you this album started out like a direct punch to the musical face. In a good way, if there’s such a thing….

What I mean is this: It opens like the first scene to make you crap your pants in a horror film. Again – in a good way…hmmm…am I making ANY sense here today? Lemme explain…

The Great Spaceport Mystery, the new album by band of similar name The Great Airport Mystery starts with an incredibly melodic and beautiful guitar line that goes deep into a pulsing bass beat before absolutely RAMPAGING in nearly halfway into the track, long after you expected it. Now – I listen to my music LOUD – what other way IS there? So when this song kicked in, the double kick just murdering the drums and the intense vocal work from Ryan Gilpatrick – yeah…complete honesty here…I almost crapped my pants….

Self-described as progressive metal – take a listen to an absolutely KILLER track right at the front of the album – “Expo.” Excuse me for saying but…FUCK YEAH! My ears LOVE this. I’m finding it somewhere between the music of Hella and Faith No More, with maybe a twinge of Brandon Boyd (Incubus) tone mixing with those Mike Patton-esque vocal patterns. I respect the shit out of all of these bands – and to realize the company that The Great Airport Mystery is keeping is very inspiring. Progressive metal is a completely accurate description – furthermore it is alive and well in the indie scene if this is what’s out there.

What is also true is that there is an undeniable texture that runs all over this album. Much credit should go to a fantastic mix on these songs – tracks like “Portal” with the heavy bass riff coming out just right like it does is just as much a testament to the playing as it is to the mixing. Ryan Gilpatrick it seems, has talents for many things. To go further into “Portal” – the use of voice samples during the middle of the track were haunting and set up the climactic build up to the end.

It should be noted that Ryan’s musical partner John Kennedy is responsible for some incredible guitar work in addition to playing the bass and keys. Take a song like “Orbital Descent” listen to the range of what these guys can play, cause in a song that is only 2:56 long and one of the shorter tunes – they cover the sonic map front to back. The guitar work at the beginning, jagged, something like out of the Mars Volta playbook nearly…

Then watch them expand. “Orbital Decent” heading into “Horrible Discovery” was the selling point in this album for me. I had already been impressed with each and every track up til these two; then as I mentioned “Orbital Descent,” which shows the full range of the band with 3 minutes leads into “Horrible Discovery” with is nearly four times the length at almost twelve minutes long and shows what The Great Airport Mystery can do with space – lyrically and musically. About twenty seconds before the eighth minute you get another fantastic guitar solo before Ryan’s vocals come ripping through once more in another display of how the instrumentation is present and accounted for at every turn on this album.

The intensity that they start the album with once that initial explosion bursts through in the opener “Spaceport” honestly never lets up through the twelve tracks. This sounds about as “pro” as “indie” gets; it won’t surprise me when I hear that The Great Airport Mystery has been added to the Warped Tour or to hear about them touring with bands with enormous street cred.

They’ll continue on to challenge themselves musically throughout their career – the work and songwriting effort they’ve put in to make each and every song as tight as their last has paid off and they can certainly check off “make consistent album” off their bucket lists.

“Conduit Closing” the final track brings the overall story of this concept album to a close with all the heaviness and skill put into every solid track before. Metal fans will love this. Progressive Fans will love this. I, again, loved this.

I like visions, I like concepts and I like hard work. This tale of space in The Great Spaceport Mystery by The Great Airport Mystery makes all three of those necessities shown and known. The final two minutes of this album made me instantly want to play it again as it drifted back out through the acoustic of whence it came. Overall hypnotic in every way – this album went well beyond anything I expected and never let up, always gave me something extra in the playing or mix to listen to. For this progressive-metal genre we’re talking about – I just don’t personally hear how it could get any better than this. Incredible work guys – keep it going.