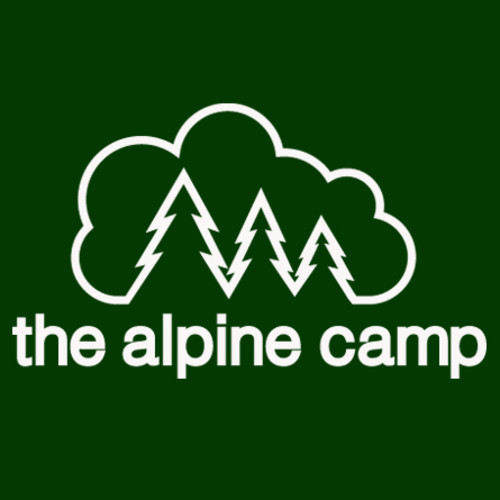 Thought I’d write a quick new intro on this review of The Alpine Camp…I wanted to have this out there yesterday in the early morning but that wasn’t meant to be. As that’s one of the most silent moments you’ve seen me go through at sleepingbagstudios, especially through the written side, a quick explanation is in order…

So the quick one is that I’ve been to the emergency room, and no – not because the music of The Alpine Camp had put me there…they’re actually one of the only things currently making me feel any better at all. Nah, as much as I try to barricade myself indoors and only let the music inside – something got through the defense and knocked me flat out during these past 48 hours. That wonderful feeling where you can’t sit still, or stare forward….can’t get the energy to listen or to type even….we’ve all been there at times, even me….it’s just never put me into the emergency room before!

So…that’s where I’ve been…but just days before that I was in the middle of telling you all about this band The Alpine Camp from Los Angeles that I’d recently been switched on to…so let’s all get better together here and heal through this amazing new music.

And not JUST new music, but new music with a purpose! From what I’ve read and researched while having a listen to – the last thing that this duo wants to rely on is a musical gimmick or fluke of their own genius. With the quality of these songs, it’s more than apparent that the overall sound is every bit as important to The Alpine Camp as it would be to you. And after two years of incubation – this project has found itself on the launching pad to some very big things.

Chris Bell on guitars & Charles Etienne on keyboards, both sing as well – they’ve found themselves on a mission here through their music; to combine their bluegrass & country skills and funnel them slyly into rock-based music.

They’re not trying to pull one over on you rock fans, they’re being honest about it on their social pages. And besides – when you have a listen for yourself, you’ll realize that this is a combination that The Alpine Camp is pulling off exceptionally well. Don’t be afraid, rock fans – embrace your inner twang!

You’ll have no issues with that mission, I can guarantee you that. The music of TAC is ridiculously catchy. From the low growlin’ drawl coming forth from the vocals to the well-played and ear-catching instruments assembled behind them – each component of what The Alpine Camp are incorporating into their work finds a way in there quite nicely. Visiting their official site will hook you up with some of their music right away – three excellent glimpses into their musical future through tracks “Parents,” 400 Dollar Millionaire” and “Noose.”

As a set of songs, it’s an excellent sample of what these two are capable. Fantastically written and played – “Parents” would be the first song to start out your experience at their homepage and that particular song is a real highlight of just how well they’ve gotten their vocals to come out. You take that song, combine it with the following track “400 Dollar Millionaire” and you’ll also start to get a sense of just how much of a good time they’re having over there – and just how much it genuinely sounds like they want to share that with you too. The songs are playful, bouncy and full-to-the-brim with the Americana-energy that you know and love.

That being said, their particular style and approach to this musical combination will definitely remind you of a particularly famous English singer/songwriter…..Elvis Costello anyone? Have a listen to the final track on their site called “Noose” – the comparison here between The Alpine Camp and Costello’s music would be undeniable.

And at the end of this brilliant song and opening set of tunes? From over the mic you can hear at the end, “Well, that was kind of shit, I’ll take another one for sure.”

You can assume like I have – unless they used some studio-splicery, someone else out there was able to hear that was definitely not shit whatsoever, but indeed a brilliant take on an excellent song. Ending a wicked introductory set to the music of The Alpine Camp on notes that have me absolutely looking forward to what comes out in the future from this impressive duo.

Find out more about them here at the official homepage of The Alpine Camp – http://www.thealpinecamp.com/