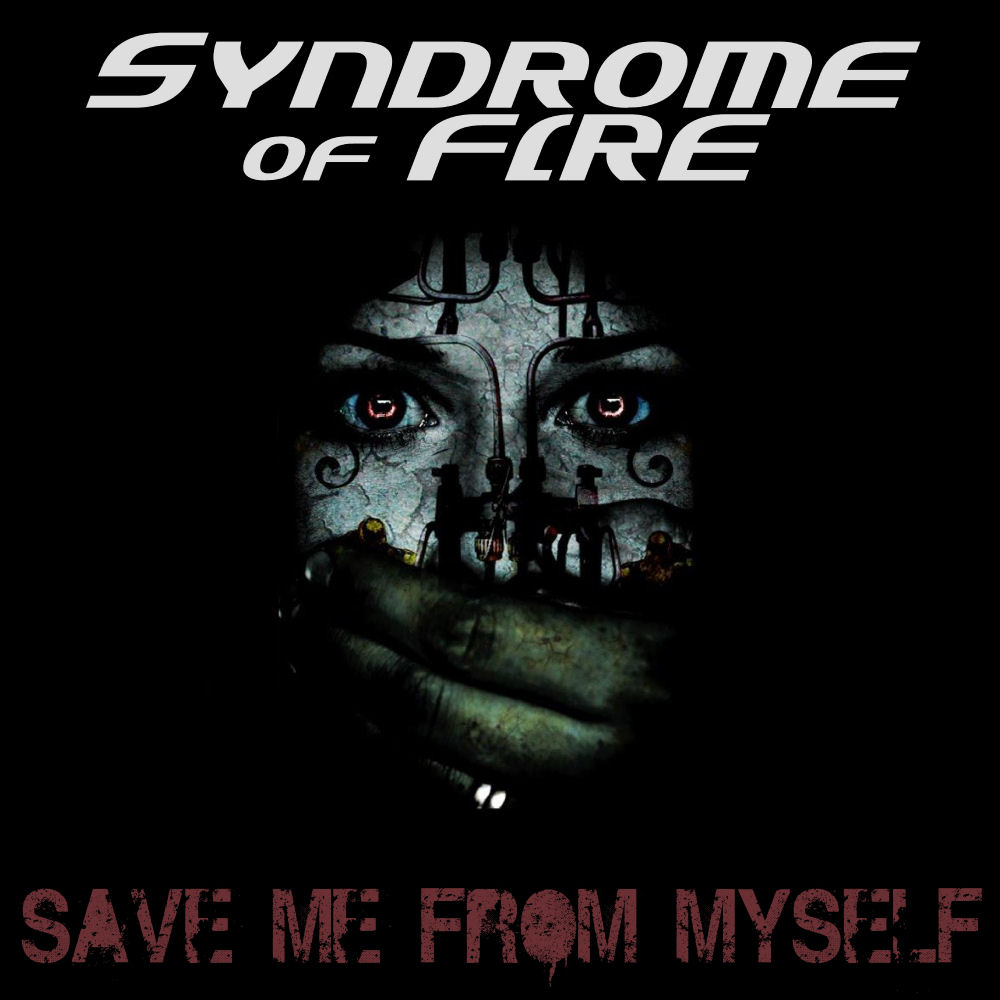 Syndrome Of Fire – Save Me From Myself – EP Review

Hmmm. Now that I read that opening, I’m thinking you might not all know what I mean…I better explain that better I suppose cause I’m certainly not implying this EP is bad in ANY way. Polar opposite; this is a genius set of four songs together, performed by a band you won’t be able to hide from the name of very soon – Syndrome Of Fire.

What I was referring to in that opening was that this reminded me of the popular electro-rock band Garbage with a harder edge to it. As a music journalist – I can absolutely hear where 99% of the comparisons are GOING to go for Syndrome Of Fire…they’re going to latch like vultures onto Evanescence comparisons…and they’d be wrong.

Part of that reason is that lead singer Cassie Goetzke could match Amy Lee’s tremendous vocal range any day of the week. Listening as a music producer as well when I’m doing these reviews – I often hear that ONE line, or verse, or spot in a song that I wish the team recording my subjects had pushed the singer or band 10% more to get that maximum result and best performance. In Cassie’s performance I truly hear perfection and a voice that was created to do exactly what she’s doing on this EP – I wouldn’t have asked for even a bit more – you can HEAR she put everything she had into every line.

And for the record? This band would kick the crap out of Evanescence.

More accurately – these guys remind me more of current bands like I See Stars and our own local band from the island, This Day Burns – both acts of extreme quality themselves and of a similar style for sure. The hard-electro edge, fronted by the female vocals, is a style of music that is beginning to swell in the underground…poised and ready to spring into the spotlight again very soon in my opinion.

Cause much like Limp Bizkit had brought attention to and then ruined the genre of rap/rock, forcing it back underground until other bands came around to do it BETTER…that same thing could be said of what Evanescence did for the metal/melodic music of the 2000’s. The immense over-popularity of that style of music sent it straight-up, and then eventually, straight-out of existence again, back into the underground.

Waiting for bands to refine the sound.

Waiting for the next generation to take it to the next level and be BETTER.

And to this, I say quite warmly – Welcome Syndrome Of Fire…really…WHERE have you been?

Bands putting music together as well written and creative as this aren’t getting LUCKY – they’re just that damn good. On this EP they come out guitars BLAZING on the first track called “So Sorry,” in a sonic assault led by Ryan McMahan on a menacing riff and Cassie instantly demonstrating just how powerful she can be in the chorus of this opening song. The energy, the desperation, the HUNGER and the LOVE of doing what they’re doing can so easily be heard not only on this track, but on this entire EP. It is not every day that you’ll come across an EP so tightly made…where you can hear crystal-clearly just how harmonious the inner-workings of the band are. It’s a relationship so special that when it exists you can hear it beyond the togetherness of the music itself and know that it has to exist in real life.

Now, you’ll hear the second track, “Sins” and you’ll think I’m the one who is wrong about comparisons. You’ll hear the Evanescence side of the argument at the beginning. But wait!

First of all – have some FAITH in this beard you love! Secondly – listen to the production as much as the structure and you’ll hear what I mean. Or try the opening line of the chorus and the rest to follow…that’s not Amy Lee…that’s much more like the brilliant craft of Shirley Manson…

If you LIKE…I’ll concede that perhaps it’s just a great combination of many of those influences. I STILL think they could blow Evanescence out of the water…I’m not taking that part back…

It’s in that combination, and their use of digital and traditional instruments that truly leads them to their own refined version of the sound of this genre. Syndrome Of Fire gives me a tremendous amount of hope for this style of music and the breakthrough I predict we’ll see from this style in the coming two years. Rock itself is on its way to that same comeback – but with the world’s attention on the digital superstars of today – it’ll be much more likely that bands like Syndrome Of Fire here will be the bridge to the gap between the those worlds.

The opening of the final track, the epic song that is called “The Fall,” is a musical masterpiece in itself. Sonny Cutler (Keyboards) and Micah Oser (Drums) should have already been mentioned in this review, but now will have to do; they’re perfect. Sonny has found an insane amount of ways to incorporate the keys into this music and make it sound like NOW instead of 1970 – a challenge still rampant among keyboard players of our present day. The drumming is not only perfectly metered but extremely well written and played, bringing the songs into chaos or serenity whenever the feelings are called for. As they open the final track with Cassie, you can hear that the possibilities for what they could make musically in their career is endless.

You see…it pays to do your research in my line of work. And if you do it PRIOR to your writing, it makes you look like less of an ass…like I’m about to do now…

I just looked up their listed influences and saw Evanescence as their first named band. Oops!

Influenced or not, I stand by what I said. Syndrome Of Fire have taken that sound from Amy Lee & her crew and refined it, made it their own, more dynamic and powerful to listen to. And while I’ve often questioned Lee’s passion for her musical career and effort on recordings – I haven’t had one reason on this entire EP from Syndrome Of Fire make me feel that way. Cassie is explosive on every track, entertaining and unbelievably talented – a voice surely to become an absolute necessity in today’s rock-electro world. She has vocals strong as steel and a mastery of melody in a rock setting; she knows exactly when to turn it on and turn it off.

Four songs out of four on the Save Me From Myself EP struck me as completely killer – this band has definitely caught onto something special and I’m extremely excited to hear what they come up with when they release their new album, titled A New Beginning in 2014.

Check out and support Syndrome Of Fire at these pages!
Facebook: https://www.facebook.com/syndromeoffire
Official: http://www.syndromeoffire.com/