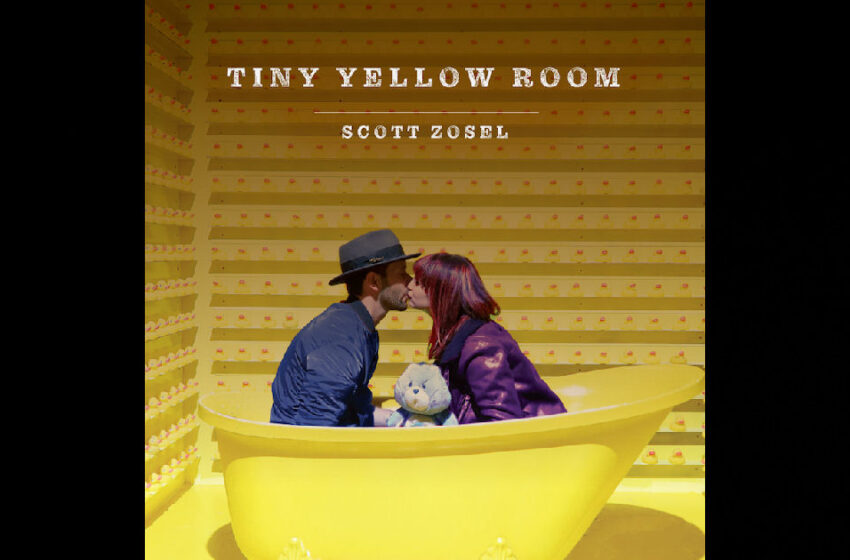 How about this…I’ll just do my best to try & describe what I went through in listening to this tune and trying to figure out what I was gonna say, pretty much like it originally happened on that very first spin…

As the music opened up, I felt like we could feel the warmth in the production & vibe…kind of like…akin to what you know in the music of something like The Wallflowers really.  When Scott’s vocals started up, I wasn’t too sure we were gonna find our way to solid ground if I’m being honest with ya…you listen to that first impression, and some of it feels shaky in that Neil Young or Bob Dylan-esque style more-so than Jakob’s band once the singing started.  And I’ll say this upfront…not only did I end up thinking that the vocals from Scott continually got better & better, the subsequent spins you take through “Flow” end up becoming more & more welcome, without that initial jarring effect of our own ears adjusting to a new artist or band on our playlists like they always tend to do at first.  Eventually, he settles right into a stellar mix of melody & acoustically-driven vibes that are comparable to what I’ve mentioned still, but also push it even further in an even more accessible direction that’s closer to something like John Fogerty or what The Head And The Heart are doing right now.  Songwriting-wise & musicianship, all that stuff checked out immediately and holds to a high standard the entire distance through – ultimately, I felt like by the end of my first spin Scott definitely warranted many more, and confirming my suspicion, each subsequent time I ended up playing “Flow” I felt like there was something new to appreciate.  The sliding guitars are brilliant & beautiful…the lyricism is truly top-notch…and in general, the design of “Flow” really hits the mark when it comes to the structure of the melody and the vast majority of the performance.  It’s along the lines of music you know & love that is tried, tested, and true to the light Folk influence on Rock songs…but by that same token, comforting & inviting in a way people are sure to dig.

So.  I suppose any hesitation I’ve got really comes in through the opening verse…I’m just trying to assess whether or not that’s my own personal taste, or if Scott could have perhaps tried a couple different approaches to that first impression on the mic that might have gotten more of the potential out of the melody.  First impressions are tough to recover from sometimes, and that’s a factor here when it comes to listening to “Flow” – if it’s something I notice, I guarantee that there are others out there thinking the same.  Whether they’re willing to say it or not is a different story of course, but that’s why I exist I suppose.  Personally – I think Scott could have gotten more out of the first minute of “Flow” if I’m being real with ya…but I’d also be lying by omission if I didn’t say that he’s truly nailing the final nearly three-minutes of this song as perfect & flawless as could be done.  So like…I mean…proportionally-speaking, he’s still nailed an A with this song, if you feel like grading it.  Even the opening verse still shows a lot of promise and hints at the magic to follow…like I said, he’s just more Bob than Jakob in a moment like that – for some, that weary-spirited lead vocal style is insatiably addictive; for others it comes across a lot less polished.  And it could all be as simple as a stylistic choice…sometimes it’s not knowing a certain part of the material or being as familiar with it as the rest…sometimes it’s only natural that our energy and confidence continues to build throughout a performance too – those first notes can be some of the hardest for any singer to nail when the red light comes on and it’s time to record, that’s just the reality.  Where things get a little bit tougher in assessing a song like “Flow” is hearing how capable and outright extraordinary Scott can be over the rest of this tune to follow, you feel me?  That’s where you’re kinda like…’well, if you could have been making that degree of melodic magic & spot-on tone the entire time, why were ya holdin’ out on us before?’  Because ultimately I think that’s a little fair to say here…I think Scott gives you a glimpse of what he can do early on…but the way his vocals continue on to refine in their tone and really start to expand, open up, sparkle & shine in this dusty-Rock Americana-Folk style cut he’s got goin’ on here…I mean…he proves he’s got everything it takes to smooth things out in-full if he wanted to.  So unless it was crunch-time when it came to how much time he had in the studio for that first verse or he had the suits & ties breathing down his neck to get that next recording finished, you’d have to assume it’s a stylistic choice that Scott has made to sing it how he has.  I ain’t sayin’ it’s the wrong choice – I’m simply saying the first minute of “Flow” might be more polarizing than he might realize…I’ll admit, it had me wondering about what would follow and whether or not the chorus & Scott would go on to find that next-level the writing seemed to be calling for – and I truly felt like he did.  Like – listen to moments where Zosel gets the rasp into his voice…or professional growl in there…you call it whatever you like, I’m just tellin’ ya it sounds fantastic.  Or what about moments like when the finale starts to come alive around the 3:15-ish mark and the warm glow of the harmonies surrounds him so perfectly?  Awesome.  The music stays as steady, reliable, smooth, and seamless as it started – in that regard, though it changes along with Scott while he sings, like any song would, the music has much less room to really give you that wow-factor in comparison to how much of a change Zosel seems to make as he starts to tap into the real core of the melody in “Flow.”  From the time that first minute clicks by, he’s on his absolute A-game, verifiably charming, and delivering an exceptional mix of stunning imagery, real passion, and a whole lotta heart in the way he sings.  You might just have to forgive me for wanting that from the man at all times…but honestly, how could ya not?  At the maximum points of the melody and the highest demands on his vocals, Scott’s delivered 100%…redemption is certainly there when it comes to “Flow” – it might seem a lil’ fragile as it all begins, but the longer he plays on, the stronger it all gets…and the more you’ll wanna hear it again.

“Flow” comes from Scott Zosel’s new album Tiny Yellow Room – find out more & have a listen at his official website at:  https://scottzoselmusic.com