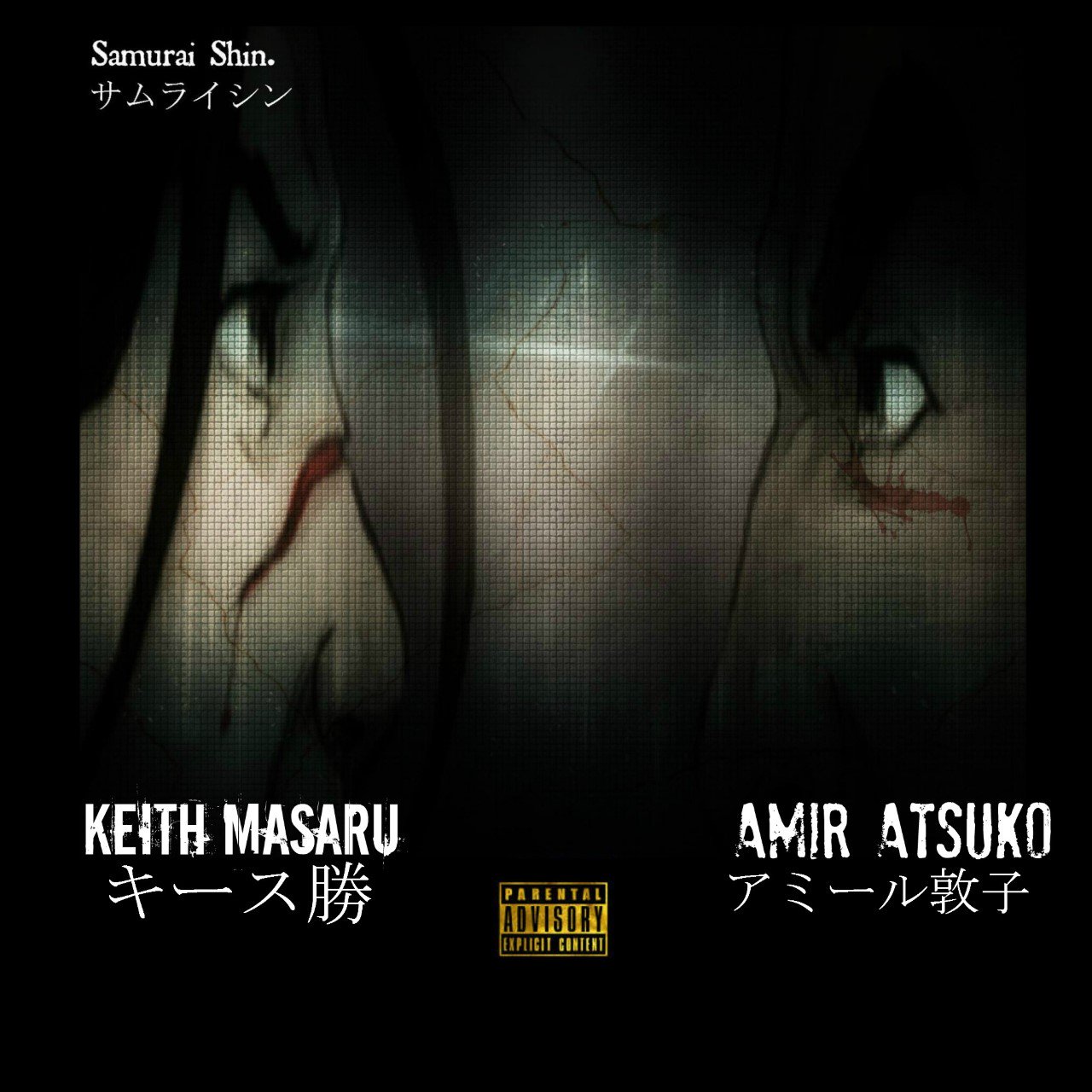 I can get behind this for all kinds of reasons.  First off – we’ve got ourselves a great combination of art + music here…and you KNOW I support that.  Samurai Shin is a new comic-book that’s just been released at the tail-end of August – just read the first issue while I’ve been listening to the official soundtrack.  Dig this comic for sure…I’ve always loved a good comic-book…I like the updated language and take on this new legend of a samurai.  Between the look of it, the idea and the music combined…you could make comparisons to more modern updates like Afro Samurai for certain – but I think that’s all-good…there’s plenty of room out there for this stuff right now…and Afro’s been gone for years anyhow.  In any event…the artwork is good, the writing is sound and the music is solid – so what’s not to love?  The story of Samurai Shin’s origin-tale in the first episode wasn’t afraid to get bloody…wasn’t afraid to use harsh & unforgiving language to make its point – and I dig the commitment in what I’ve read – I think this is a story that has lots of room to grow still but I think that the groundwork has been laid for a potentially great series of comics.  AND they want to add music to it?  Where do I sign up for my subscription?

If I’m being truthful though…I have absolutely no idea what it takes to create and pull something like this together.  I would think it’s quite the artistic endeavor overall…and I think it’s an admirable one to pursue.  I think the comic and the music can live separate lives…but I also think they’re more likely stronger together as they’ve intended them to be.  I read a lot faster than I can listen to music personally…and after the quick thirty-second-ish intro from LeQuan Bennet & Daman Mills give their vocals to “Intro – Amir Atsuko Vs. Keith Masaru” to give us a frame of reference for how these characters might sound in our mind as we read through…well…I’ll admit, I burned through most of the comic by the time “Leaves” by P.Soul was finished.  There’s not a ton happening in the music of “Leaves” – but the atmosphere is actually pretty relaxed and easy-going, which also kind of helps with reading the comic if you’re doing both at the same time.  It’s got great bass, solid beat and it’s well-produced…heck, “Leaves” makes for a solid soundtrack-style song…but it is a bit on the meat & potatoes side of music in the sense that it’s not about to get you up off your seat so much as it is likely to get you to sit down & read.  I’ve got no beef with it…it’s a well assembled track, just minimal with nothing in particular going on with it other than its repetitive/hypnotic instrumental groove.

Chill $quad looks to change the vibe quickly.  On “Stay On Point” this crew keeps the beat and sound in a similar atmosphere, tone and mood as you’d find in the back-alleys after midnight…out in the darkness and cover of night…you know…when the real shit goes down.  I dig a low-down & dangerous, menacing sound like what Chill $quad brings to this soundtrack though…completely solid rap-verse, great depth to the beat & the music…production is solid and the words even make sure to “Stay On Point” thematically, referencing the storyline and Samurai Shin in the lyrics as well.  The inclusion of the smooth saxophone only made things even better in the atmosphere and music of “Stay On Point” – definitely a winning track early on in the Samurai Shin soundtrack and also the album’s longest cut.

The rest of the music flies by pretty damn quickly…and generally-speaking, hits a lot closer to traditional background soundtrack-style music…themes and such like “Leaves” was at the beginning.  “Childhood Memories” by G-Ammo is a great example of how to make that ninety-second spot truly WORK though…this instrumental is full of real life & pulse to the samples sewn together…bright sounds, rhythmic bass-lines…and once the percussion and drums kick-in, the whole track springs to a second-wind that is seriously awesome for a song only ninety-seconds long.  There are already more twists in what G-Ammo pulls off on “Childhood Memories” then there was in the entire VMA’s just last week.

I felt just as strongly about Xia-Dawn’s “Brand New Day” – which trips over the two-minute mark by a little bit…but still a short song with an absolutely impressive amount of innovation, creativity and ideas.  The soundtrack to Samurai Shin at this point, in my opinion, has also done a great job of laying out this collection of ideas and sounds…there’s a solid build that’s been happening in both the story and the music, and I think “Brand New Day” really hits the mark.  Bombastic, bright & wild – Xia-Dawn punches up the electro-mix here on “Brand New Day” and puts the spark right into the middle of the entire experience.

P.Soul comes back for redemption…and again, for the record – I liked what he did on “Leaves” but felt like it just needed a bit more of something…and that something missing is the same something that this next track “Rain” has.  It’s still got the signature smoothness of P.Soul – still solidly produced and great texture to the tones and samples used – but in half the time of “Leaves,” P.Soul manages to make more of a mark this time around with more creativity, twists, turns and innovation in a shorter time-frame.  Again – much credit to the layout of the entire soundtrack itself as a whole – I think the stripped-back sound of “Rain” was perfect to have after “Brand New Day” and the wild-explosion of sound it has.  P.Soul dials the energy back at the start of “Brand New Day” before bringing in that beat to raise-up the energy and get us sonically-prepped for Jaymin Warren’s “Boy With A Sword” to follow.

If anything might remind you of the Afro Samurai atmosphere or give you a taste of something with some Wu-Tang…definitely gonna find that in the eastern-twinge of sounds and rap combination from Jaymin Warren on “Boy With A Sword.”  Great intensity to the rhymes, solid samples from the music really entwine into a seriously deadly combination.  Loved the sample-voice and additional elements that fuel the music of “Boy With A Sword” – there’s no doubt about the level of skill Jaymin brings to the words, but the music should get equal credit here.

Gotta admit though…I think it was the last two tracks on this soundtrack that really nailed it for me.  I loved the jazzy-piano sounds of Kuro Silence’s “Past” – this song is uber-chilled and those piano-notes sound like audible-refreshment.  The low-end bass-rumble was the perfect thing to add to the piano/string combination…this song didn’t need too much in it really to make its mark.  Professionally produced and quite captivating throughout its short duration through innovative approaches to each set of bars as they pass through the mix…I really liked “Past” – great song.

It closes on a sweet redemption, with P.Soul coming back for a third appearance on the final song “Hopeless Nitesss.”  I think…hmm…I think that P.Soul certainly has a rhythm and groove here that really pulls the entire soundtrack together.  Clearly a minimalist when it comes to assembly, structure and production – but by that same token, you never end up in an overcomplicated mess with this dude either…he keeps it cool no matter which track you hear from P.Soul along the way.  But for me…I think “Hopeless Nights” ended the soundtrack strongly on what I also felt like was his best contribution to the record overall…and there’s never anything bad about going out on a highlight like that.

Definitely cool stuff happening here throughout both the art of the comic and the art of music combined – this project gets a big thumbs-up of support from me.  Great music, solid story and fantastic experience overall…I neither see nor hear of any reason to complain whatsoever!