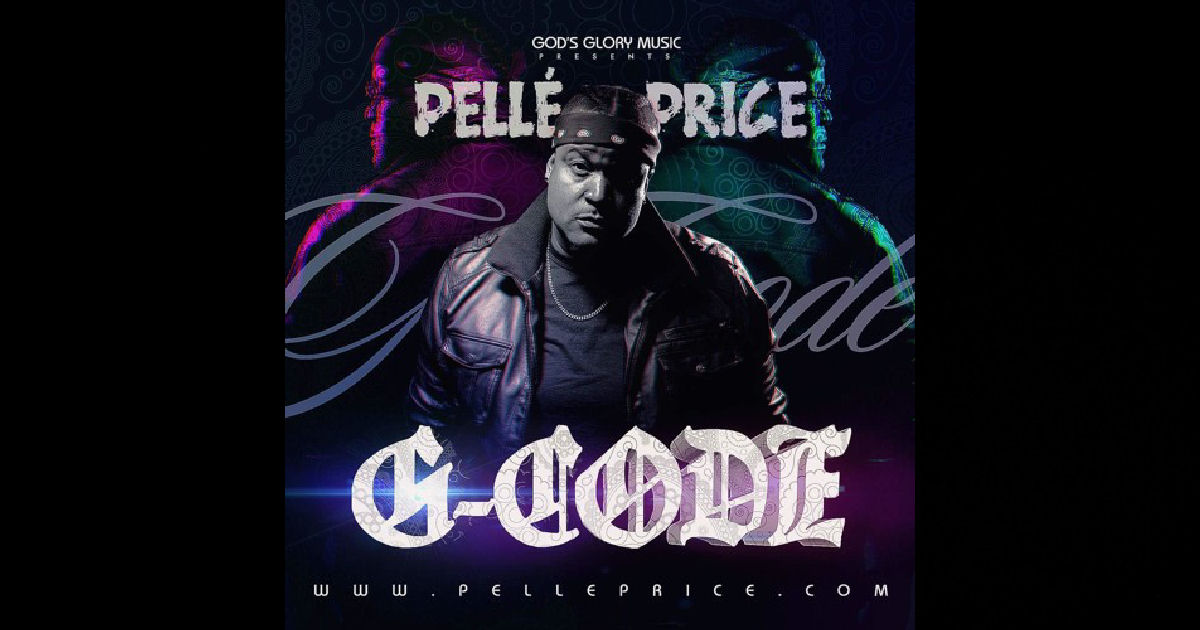 I’m actually really interested in this cut… Pellé Price is up to something wild here…and I think it works.

Even though on most of the award shows you’ll ever see for entertainment, whether it’s music or video, there are at least half of the artists & bands making sure they thank God from the podium during their speech – it’s still rare to find those same people proclaiming their faith as strongly through their art.  Rapper Pellé Price might be the answer to all this…he might just be exactly what’s needed to fill the massive hole out there in faith-based tunes that can take it in to the modern-day era with some power & confidence in the mix.  In fact – a track like “G Code” is so modern and relevant for right now with its electric club sound…that I’d be willing to bet a paper stack or two that most people wouldn’t realize just how much of a Christian vibe this cut is actually rocking.  I’m not telling Pellé anything he wouldn’t already know; I don’t want to accuse the man of trickery, but let’s face facts – the song-title is going to imply a whole bunch of other musically-related stuff to a whole bunch of other people, and he knows it.

So let’s assume he DOES know that…in which case, he’s taking that definition you typically associate with ‘G’ and redefining it in His image, you feel me?  We ain’t talkin’ gangsta or even gangster here – we’re talking about the big man himself, G-O-D.  Sounds BANGIN’ though!  I know what you’re thinking already…that stigma that Christian music of all genres has faced time & time again throughout the years – if it’s faith-based…well then…it CAN’T be entertaining, can it?  This is where Pellé Price can seriously excel…because while there certainly have been a few exceptions over time, it’s still completely rare that you’ll find a dedicated man of the Gospel bringing it this hard to the mic, even to this day.  The amount of authority that Price spits with is exceptional – he really brings the energy in such a strong way that “G Code” is definitely going to catch people’s attention.  Whether it’s from curiosity surrounding the title, the surface-level club sound that’ll grab you…whatever that access point is, will bring you further into the messages that Pellé is ultimately looking to communicate.  He’s not trying to convert you heathens out there, he’s not coming off as preachy, he’s just speaking his truth as it pertains to him, and to hopefully inspire you as well I’d imagine.  But therein lies another debate…just around the corner…

The last thing I’m going to do in any of these reviews is pretend that I fully understand the faith of the devout; I have a religious background in my childhood, but I’ve long since left the church days behind.  As many of you know from reading these pages, religion & music still remain to this very day, one of my favorite things to discuss – and artists like Pellé Price are completely the reason why that is, because they make you think.  Price will rap about how God is on money – and while that’s certainly true…I dunno…should He be?  This is where things got really interesting for me…trying to discern the sincere faith-based aspects in behind the flashy hooks, auto-tuned vocals, and monetary themes that seemed to like…maybe rock the potential balance between the message he’s looking to convey and how it would connect to us.  He mentions that it’s ultimately ‘God over dollars’ when it comes right down to it…which I suppose serves as the definitive proof of where Pellé stands on these two subjects.  Do they have any business being connected at all?  That’s where I’m coming up a little more unsure.  I mean, I’ve had issues with money & God ever since I discovered what a collection plate was for the very first time…but that’s just me.  That financial aspect seems & sounds like it’s a lot less humble than you’d typically associate with the faith-factor & sentiment that would drive “G Code”…I don’t think that’s a detriment to the music necessarily, but I do think it takes a lot of getting used to because it’s really not what you’d expect.  Does it detract from getting the messages across?  It might to some, probably won’t to those that listen closely – Price just has to recognize that not everyone out there listens to their music under the microscope; as much of a strength as the modern-day sound & flash may be – he might have to decide on what he really wants that first impression to be when it comes to his music and whether it’s getting the full message across as strongly as he wants it out there.  Is it going to be better to have the faith upfront as the first thing we hear – and then appreciate the wild sound that comes with it & how he’s taking faith-based sound to the next-level?  Or is it better to go with the recipe he’s got on “G Code” that masks that a bit in behind the sound…relegating it to almost the secondary aspect of the music & writing.  Pellé doesn’t shy away from it…especially in the final verse, he really brings that faith to the forefront…but I’d still be lying if I said it wasn’t what I felt like we’d all notice on those second spins through – that first run, you’re likely glued to the impressively dynamic sound and probably less inclined to notice just how deep his passion for the “G Code” really runs through the lyricism.  Again, nothing wrong with that – it’s just a matter of what Price ultimately wants us to hear and what parts of his music & style he really wants to make an impact on us.  Whatever the case truly is or may be – bottom line is this emcee had me thinking a ton throughout this cut; as flashy as the sound is, you’ll be surprised at just how thought-provoking this song really becomes when you get right into its layers.

Many people out there associate religious personalities with the meek & the mild – but don’t get caught sleepin’ people – faith can be a really powerful thing.  And when you hear the giant performance that Pellé Price puts in on the mic…man!  It sounds like he’s up on the top of a mountain and shouting down this wisdom at us from way up high…it’s a seriously enormous sound from the wild beat & electro elements firing off in the music to the way he commands the microphone with such a massive presence.  The man’s got a ton of skill and equally high-doses of pure style on the mic; it’s rare that I’d advocate for adding more religious-based content into the lyrics – but I’d swing even further over to that aspect if I was Pellé, because that’s where the hole exists.  If he can bring this confidence, precision, professionalism and skill to a more straight-ahead and accessible-to-all place lyrically that leans heavily on the faith-based teachings…I think this guy could really become a superstar in the genre that could guide a whole ton of people towards the word of God.  From what I can tell, that’s the real goal here – and he’s going to reach a ton of people through what he’s got going on with “G Code” that might not have considered His words before – I’m confident that’ll be the case.  Pellé Price has got the technical skills that make the difference and can articulate exactly what he wants to communicate on the mic – as to how universal he wants to make His message to everybody…that’s completely up to him; as far as the overall sound & vibe goes though – everyone out there will be able to hear & agree on the fact that “G Code” is workin’ overtime to make the magic happen in your speakers.

Find out more about Pellé Price at his main website:  http://www.pelleprice.com