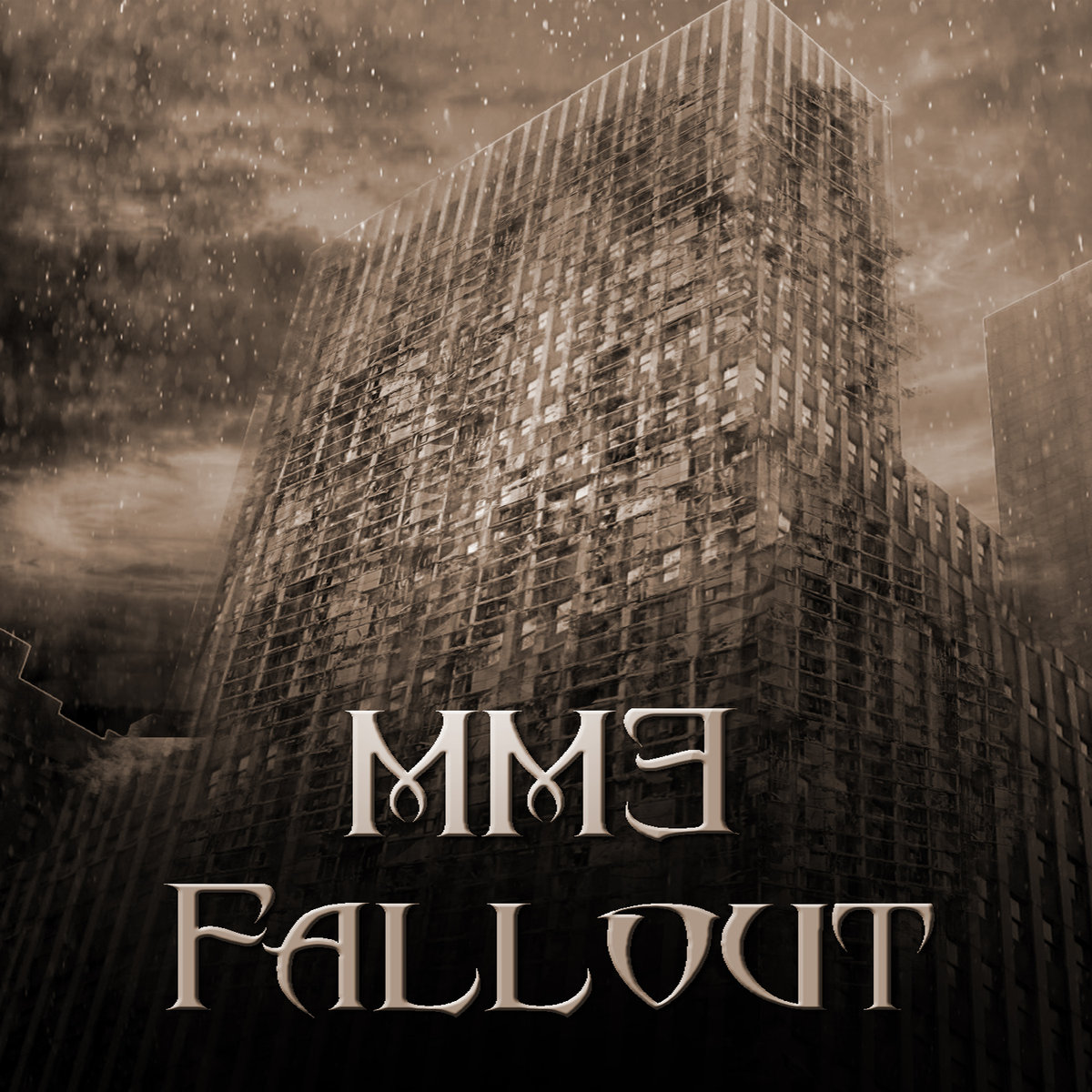 Not quite sure how far back four of the six tunes from the new MM3 EP go in the band’s timeline, but Fallout is advertised as 2 new tracks to rock alongside what I’m guessing are slightly older tunes revitalized for this new recording.  If anything…what I am sure of…is that they come out swinging big on the brand-new cut opening the EP, “In The Moment.”  After a quick count-in, the drums on this tune come ROARING out of your speakers along with the crunch of distortion as they start-up the new record.  Guitar parts are strong…the riffs are big & burly…the mix on those drums though – that might take the top prize here.  Vocal-wise…the flow works well and the tone & approach sound like they work solidly enough…lyrics are mired a bit in the typical angst you’d expect for a heavy style like MM3 has…but overall I thought this opening cut started the Fallout EP off on firm ground.  Really can’t get over how MASSIVE the drums from Al Ruggeri sound right off the bat here…gigantic beats with incredible tone.  Smart writing in the sense that the chorus itself is truly an instrumental one…and the fact that those hooks in the guitar riff are strong enough to support a concept and approach like that speaks to their strength entirely.

Into the crunch of “R.O.K.” – this is a track for those real guitar-lovin’ dudes that dig on albums like Sex & Religion by Steve Vai…or maybe like, Facelift-era Alice In Chains when they kept a lot more musicianship ring-out of their guitar-cabs.  Check it out if you don’t believe me…he got all kinds of down-low & dirty, just like MM3 is on “R.O.K.”  Mix-wise…this one’s epically tough to get perfect in the balance and I’ll acknowledge that for sure as one who has been behind the boards enough to know…I’d say the guitar solos might still come through a bit bright in the mix by comparison to the rest.  I mean…they’re damn good solos…just a touch beyond in the volume-department; what makes it the most noticeable is that the vocals are set in the depths to begin with…so when those guitars come up even further, returning to the vocals ends up sounding like they’re even buried in there even further.  As an idea itself though…”R.O.K.” rocks hard, grinds hard and sounded like with just a tiny bit more refinement, this entire track would gel together exactly to where they want it to be.

“Society Falling” was a bit of a toss-up for myself personally.  I liked the way the song found a solid gear to click into as it headed into the chorus…but in all honesty the surrounding elements of most parts of this song feel really loose in structure and close to slightly lethargic in the energy of its groove overall.  Saved perhaps by a wicked guitar solo and final electrifying moments at the very end…up until that point I wasn’t sure that I felt like MM3 was even into their own song here with “Society Falling” – something about the passion and connection just felt like it was missing a bit here.  Drums sound great…might bring’em down just a bit more to help the guitars, bass and vocals stand-out a bit more…but overall there’s an idea that could work here.  With “Society Falling” not being one of the newer tunes…it could be that they’ve settled too comfortably into this one…the mixed energy in this one sounds close to routine for the band, almost like they’re going through the motions when we as listeners of course want to hear them pushing it right to the very limits of their capabilities.  That being said…to be completely fair…the guitar solo from Mike Meagher does exactly that…I felt like once he took over towards the end of “Society Falling” that we really got to experience the vibrant connection to this cut I was looking for.

A few issues in the mix with “Married To My Madness” that may or may not work for the people out there.  Lead-singer John Williams heads a bit further inside the mix on this one…but maybe a bit too far inside it to stand out as much as he should have here on this tune.  His approach is even a little mixed on this one…close to like what you’d imagine Anthony Kiedis sounding like in a metal band at times in the verse but I thought the chorus came out sounding like it fit together more cohesively than the concept of that combination.  Great ideas on both the guitars and bass…even the vocals are reaching out for something new from the tracks we heard before and I can appreciate that for sure.  Set a bit further inside the mix once again, Williams lurks strongly in the shadows of the verse on this one until stepping out further into battle for the chorus.  Hitting the instrumental-side of their music one again with power & strength, you can hear this tune amp up in its enthusiasm, ambition and overall attack as it surges towards the end.  Some people dig that distant sound where vocals are sunken deeper into the mix…for the most part I do myself…but I think they could come up a bit here like we’ve heard on many of these other tunes by comparison.

“No One’s Fault But Mine” is the current single/video that the band is rocking and also the other new tune in the set of six.  The video definitely has some KILLER visuals working in support of the music, and much like I felt about the opening tune “In The Moment” – I felt this cut strongly represented the sound they’re truly looking for.  Again, I’m not exactly sure of the age on all the tunes that make up the Fallout EP but from what I’m hearing, these newer tracks have a slight edge over most of the others.  I like what Williams is doing in the vocal flow of this cut quite a bit…he sounds menacing and focused – and as a result I think his tone, approach and attitude really matched the music here in a much more significant & strong connection.  Really dig the grind of the guitars, the beat & bass are strong and the mix really worked well on this tune…great proportions of large amounts of everything you want.  The end of “No One’s Fault But Mine” really steps it up to that next level with the title-line buried into the madness of the mix and repeating throughout the final moments.  Strong tune overall and a good choice as the single from this EP.  Excellent combination of the heavy groove & punch in the writing of this one…plenty of dynamics in the music here to add incredible contrast as they switch & transition from sound to sound & part to part.

Absolutely loved the way that “Black Sun Mourning” began…and much to my own delight, it really sticks with the idea it starts with.  Riding the EP’s final moments out on a highlight for instrumental atmosphere…I get that it’s probably not MM3’s ‘normal’ thing…but MAN does this WORK.  100% captivating and entirely memorable in my opinion – they played this final tune smart as no words are needed here…hell, NOTHING else is needed here; “Black Sun Mourning” is a perfectly executed idea and a fantastic way to end the experience.  Not just talking ‘good for an instrumental’ here – I’m telling ya, “Black Sun Mourning” is a stunning track any way you examine it.  Kind of reminded me of the subtle intensity you experience in “A Warm Hurt” by Nine Inch Nails…it’s got that real ominous, haunting, yet comforting & inviting sound that really captures the mind’s full attention.  Love the synth keys and the glow of the atmosphere surrounding the guitar gently playing in the mist of the distance…”Black Sun Mourning” might be a bit less-involved band-wise…but this stripped-down ending completely paid off for them as a band overall and really brought that sense of completion to the Fallout EP.

Find out more about MM3 at their official pages below!