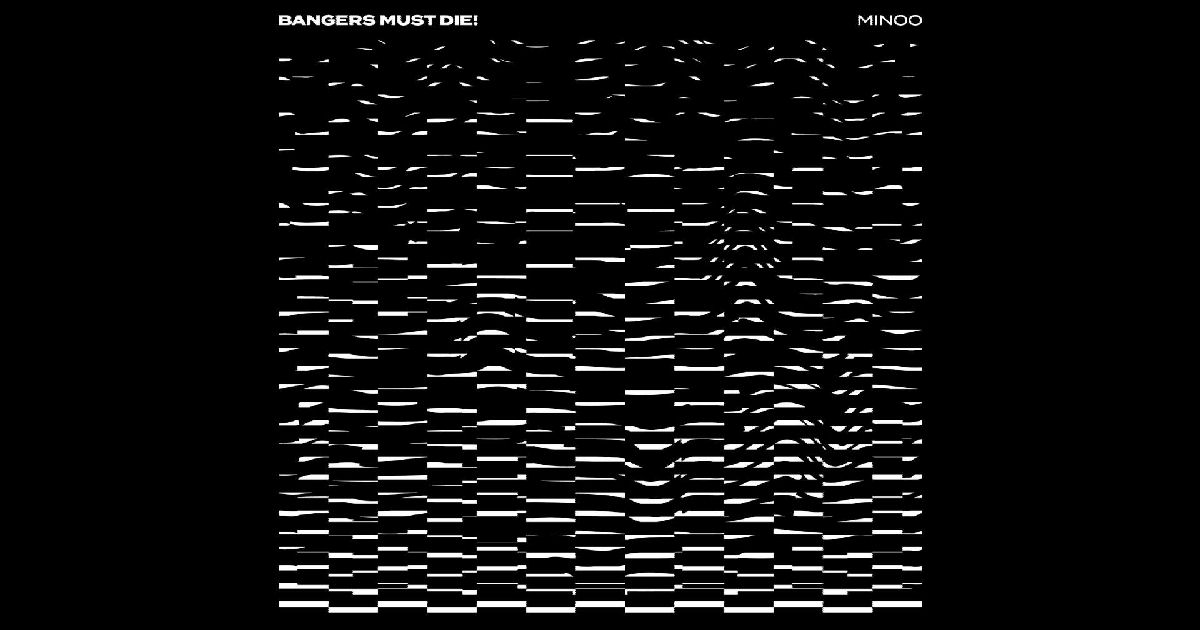 According to what I’ve been reading on Polish producer Minoo, Bangers Must Die! is the fourth full-length record he’s put out, this latest one due just around the corner in the New Year, being released officially in 2018.  Keep an eye out for this guy…maybe an ear or two as well…if you dig you electro with a chilled-out vibe to it, there’s a good chance you’re going to love what Minoo is coming up with.

I mean…I’m assuming that it’s like…club-bangers he’s waging war on with his peaceful approach to electro?  It doesn’t exactly get any more specific than that; and these are instrumental songs…so it’s a bit harder to say for sure…but that’s what I’d assume this venture into minimalism is a response to.  I guess it could be gang-bangers…but that’s a bit 90’s of a term.  Maybe Minoo is tired of other people bangin’ out their sex-lives while he’s trying to get some sleep in the next room, or maybe, just MAYBE…maybe Minoo just has a real hate on for Bangers and Mash, the infamous British meal.  Who can possibly know the truth?  But if you’re bangin’ something, whether it’s a pot or a pan or otherwise…maybe just be exercising a bit of the ol’ caution as well…because apparently Minoo feels that Bangers Must Die!, and who knows the lengths he’s willing to go in order to make that happen.

Just don’t be bangin’ – ANYTHING – I think that’s the lesson here today.

I’ve certainly got no issues with what I’ve heard.  Minoo is part of that ‘chillwave’ sound if you’re one of those people out there that believes in sub-genres & all that.  Suffice it to say, for those out there that feel electro is all one big genre, the chillwave niche offers a more relaxed vibe overall, as its title would imply.  Checking out the four songs from the sample set of his upcoming album Bangers Must Die!, the opening track “Tension” is going to be a perfect way to bring people into the rest of the set to follow.  It pulses in with brilliantly placed background elements and percussion creeping in…for those out there that dig the low-end heavy atmospheres you find in a band like Massive Attack, this isn’t that far removed at all.  Minoo lightens the surface of this first cut with electro arpeggio action leading the way and clever vocal samples added into the mix.  Really well produced…seriously impressive clarity to each sound added in along the way, and “Tension” moves with solid textures & captivating sounds to ignite the interest.  Certainly caught my attention…I’ve always had an affinity for chilled-out vibes in music.

I enjoyed “Tension” and definitely think it would be a great start to an album – you’d get no arguments from me there.  Like any good album out there, you can only hope that an artist/band doesn’t blow the full load on that first track and that the music still has room to grow, evolve, expand and impress further upon a great first impression.  With “Bang” – you can tell this will be true of Minoo’s Bangers Must Die! – because this is already taking the sound/style to that next-level without a doubt.  “Bang” is the kind of song that separates the people out there that make music as a hobby part-time and a producer like Minoo that has obviously dedicated their every moment to maximizing the sonic experience.  You can hear the absolutely IMMACULATE clarity in the mix on “Bang” – and right from the ground-up, from the song’s concept, structure and movement, right up to the choices for sounds being made and included along the way, this track continuously demands to be listened to in all the right ways.  Minoo packs this entire song with audible emotion and vibrantly imaginative expressions…within such a synthetically-based environment, it’s impressive how he can communicate an incredibly real vibe you can truly feel.  I liked all the songs I’ve heard from the sample of Bangers Must Die! – but without a doubt, I felt like “Bang” was the track that audibly stood out to me time after time as I listened throughout the week.

I have a feeling people will likely hear these songs in a similar way that I am in terms of what will stand out most when they first hear them.  Personally, I really dig a song like “Sonic Empireee” where the hypnotic & repetitive electro hooks have the time to seriously sink in and work their magic – but that being said, I don’t have to explain to Minoo or anyone else out there that listens to music that this kind of cut narrows the audience a lot.  “Sonic Empireee” is built and engineered for the audiophiles out there…but in terms of what the average set of ears can hang with or latch onto, this is also the kind of track that will ultimately determine if you dig what Minoo does overall, or if you just like a few of the songs.  Make sense?  We’re not talking traditional easy-to-digest hooks here, even though “Sonic Empireee” has a fairly accessible, relaxed & chill sound; it’s still a slow-mover, still trance-inducing…but for most people out there, the sparseness in the atmosphere of this cut won’t quite give them enough to grasp onto.  Again…being his fourth full-length record, it’s not like a comment like that would be news of any kind to Minoo…dude clearly knows what he’s doing and what he wants to do with his sound & style…he knows full-well that some people will ‘get it’ and some people won’t; that’s just an inherent risk that pretty much comes along with anything close to the experimental & electro-genres as a whole, but even more-so once you start going into the sub-genres like chillwave or ambient.  He knows that.  I also think that Minoo is long past the point of worrying about any of that…like I said, people will get it or they won’t…the important thing is that he’s focused and clearly loves what he’s doing – that MATTERS.  In terms of a song like “Sonic Empireee,” it’s the structure, production, selection and mix that tends to stand out…and if you really love the art of sound, you’ll likely dig this bizarre oddity just as much as I did.

As far as I’ve read & understand, Minoo’s new record is officially being released on 05-01-2018.  It’ll have eight tracks on it + an additional remix from Sina, who puts a new spin on the track “Red Light.”  I felt like the “Red Light (Sina Remix)” was able to succeed a bit more where “Sonic Empireee” might struggle in finding that balance between chilled-out, hypnotic sounds and enough of them for us to listen to in order to still be engaged fully on what’s happening in the music.  “Red Light (Sina Remix)” has a wonderfully soothing energy to its sound…a calming aura in the atmosphere of the song that’s bound to put your soul at ease; still with enough beat & groove to have you feeling the vibe for sure.  I felt like it capped off this set of four perfectly…I really enjoy what Minoo seems to enjoy when it comes to sound and music, structure, assembly, minimalism and clarity…we definitely love a lot of the same qualities in what we listen to, which made each of these tracks really easy for me personally to like.  Of course, I’m not the only one out there bound to feel this way about what Minoo is doing on Bangers Must Die! – we can always use a moment in our day to just relax for a moment and chill out without the hustle and grind dominating our thoughts…and perhaps that’s exactly what this talented producer does best by giving your mind some peace through music and allowing it to drift off into an exquisite audio journey.

Find more music from Minoo at his official page at Bandcamp here:  https://minoo.bandcamp.com/