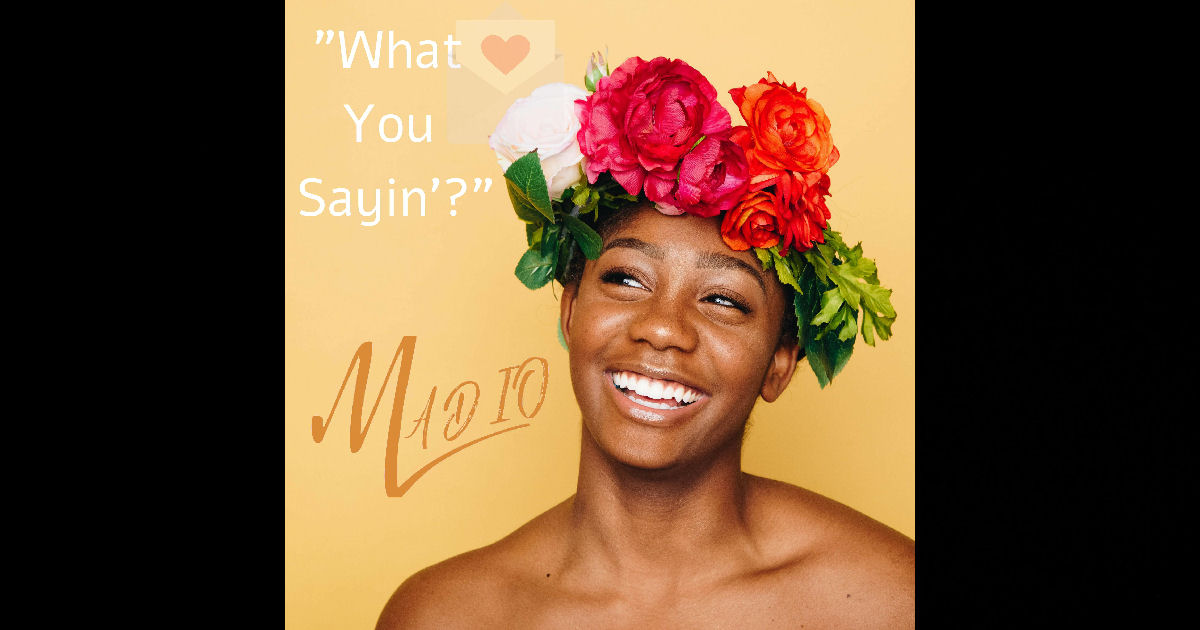 MADIO – “What You Sayin’” – Single Review

You know…at the end of the day, I’m pretty much just like you.  I might be socially-awkward as it gets, but when it comes to music, if a song makes me feel the vibe, doesn’t matter what genre it is…moves get busted out…chair-dancing is not an uncommon thang here within the studio walls of SBS.  Sometimes, like here in the case of “What You Sayin’” by MADIO, several spins go by on repeat while I work on said dance-moves and time seems to fly by before I even realize I’ve now listened to the same cut for like, twenty repetitions and haven’t written a single word down.  Back to what I’m supposed to be doin’ I suppose…get some of these words down here for ya…but respect and shout-outs to MADIO, because even though I’m a music-reviewer…isn’t busting moves and getting into the groove ultimately the actual right thing to do for a song that makes you feel it?  I think so.  I mean, I could write words down all day long, but if I hidden camera were to catch this footage of me here in the studio, you’d know exactly how I feel about “What You Sayin’” without me having to say a single word, you feel me?

I won’t lie…I just came out of reviewing something super-mellow…it took me a second to adjust to the quicker pace of this single, even with the chilled-out groove it packs.  Make no mistake, it’s smooth, but things are moving quickly…the production on how the sound moves from the lefts to the rights with the extra whisper of the cymbal samples & beat traveling from side-to-side also took a second to adjust to – MADIO’s got a real sonic experience comin’ at ya from all angles on “What You Sayin’” and it can make your head spin a bit.  That being said, the confident performance he gives ya on this single and the reliable rhythm keeps you grounded enough to not get overwhelmed by the swirl of sounds around you – the hooks are strong and the verses might even be stronger…no doubt that this emcee is bringin’ it.  At the end of the day, you’ll get what I mean…I’m just sayin’ imagine you came out of a Folk album or some Classical music and then jumped straight into this…it’d be like coming out of a movie theater and into a blazing hot & bright summer day…it takes a second or two to adjust to it all, and then you’re more than all good from there.  Then you’re stuck in your chair dancing the robot with the song on repeat for an hour while you should actually be writing about it…or at least, that’s how this all went down for me.  Normally I’d just jump right into a vibe like this…I’m sure that’ll be the case for most of you out there.

Because on the mic, MADIO makes the magic happen…and from the sounds of the lyrics on “What You Sayin’” he’s set & ready to make the magic happen elsewhere too if ya know what I’m sayin.’  Put it to you this way…based on everything he’s rhyming about on his new single, it’s pretty clear the man is a lover, not a fighter.  Representing the Bahamas proudly, this artist raps just as fluidly as he sings his hooks…he’s definitely feeling the vibe and you can hear it in the precision of his words and passion in his voice.  For the most part, he’s keeping it real with ya – but there’s actually a bit of humor to be found here that’ll make you crack a smile too…or at least, that’s what I felt like I was hearing.  In the hook, he mentions makin’ a baby for a second there…and on that first time I was listening to it, I literally felt my eyebrows raise to the roof and I was thinking to myself, ‘Whoa!  That might be one step too far’ for this stage of the relationship that MADIO was relating to us in this storyline – and I think it’s the very next line that confirms exactly what I was thinking all along, explaining he’s ‘just playin’ – or at least, for now.  That whole island might wanna be wearing a jimmy hat when MADIO’s in the house, just sayin.’

I dig the energy, I dig the vibe, I dig the performance…no real complaints to be made here.  MADIO puts the attitude and style into this cut with the vibrantly fresh way he approaches the lyrics, flow, & melody of “What You Sayin’” and the beat is remarkably enticing to listen to.  Dude definitely has bars…he can seriously let the rhymes rip when he wants to…but you’ll appreciate the real balance he puts out there as well with how tight the hooks come out sounding too…MADIO is clearly a multi-threat on the m-i-c – this is a great single for your summer that’ll bring the heat to your speakers.