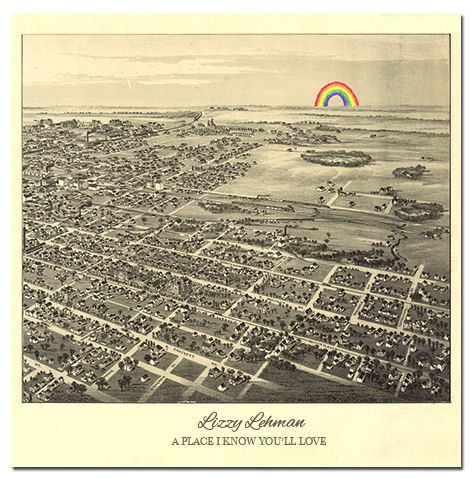 Musically, when you’re authentic, it’s impossible to hide. I’ve expressed in the past how much of a gift it is to listen to all of your music, starting each and every morning with a completely new and unique experience for my ears. Pressing play has got to be the best moment of my day…that mystery…that wonder…what comes next?

Today for you I have an album that I’ve been playing nearly EVERY morning for the past couple of weeks. This is the new album from Lizzy Lehman – A Place I Know You’ll Love – it has some of the most incredible depth and texture in sound I’ve heard in this independent music scene of ours. She has created an INCREDIBLE atmosphere in each and every one of the eight tracks on this short but sweet album – but it’s the authenticity in the songwriting as a whole that will make you want to spin this every bit as much as I have.

Take a listen! Really! You all know I listen to Vancouver’s hard rock band The Pit on near endless repeat – now picture my all-too-bearded chin switching it over to this from one of their songs to one of Lizzy’s! Yes – I can do this – my ears were born ready to listen. I found an incredible amount of “small comparisons” to other artists that I respect incredibly throughout these multiple listens. I say small because no matter who it was whether it was a male or female artist – that moment of comparison would come and go so quickly, as if she was simply borrowing the best of the very best out there and then making it her own & original.

My first thoughts had Lizzy’s songwriting somewhere in between John Mayer and Bob Dylan. The vocals were nearly a cross between Chrissy Hynde, David Gray and Aimee Mann. At points – she can remind me completely of the style of bands like The National or Mimicking Birds. So how’s that for a mix of completely respectable musical careers in comparison? When you leave Mayer’s personal life out of it – this is pretty good company to be keeping overall – at least in my mind. But with all those references in there – how could you even begin to categorize this into a musical pigeonhole? Ha! Nice try music industry – you CAN’T.

It is certainly no secret that I listen to a ton of music by all genres and artists but I’ll admit it has felt like it has been a while since I did nothing at all but sit there and listen. On my first run through Lizzy’s new album – that’s all I was capable of doing! I was musically frozen and between tracks from this album you could have heard a pin drop in the studio I was so quiet. It stood out so much to me that anything less than a complete 100% of my attention on that first listen simply would not have been acceptable – this is music that commanded my interest through excellent songwriting and fantastic production on her musical vision.

On this album – A Place I Know You’ll Love – LL gets it RIGHT. I was glued to the words of her songs – each one telling a story painted through excellent wording and phrasing – but mainly through the delivery of these incredible heartfelt and emotional vocals, lyrics and sentiment. The combination of her songs “The Arctic,” “Stars” and “Nothing To Say” being completely back to back to back might just go down in history as being three of the most well written tracks to sit side by side like that on an album.
“The Arctic” is a sweet song through the melody – and in behind it a tragic and cautionary tale is taking place through the lyrics – “What a beautiful, horrible thing,” sings Lehman over a melody that might make you think it was a love song. “Stars” might just be the standout for me. Lehman challenges herself in creativity and in her own complex vocal part here – this is where I would draw that comparison to a band like Mimicking Birds. The delivery and note choice is so refreshingly unto this song and this song alone; this is hearing something beautiful and new. And here’s another example of her great sense of texture in song – listen to the distorted guitar against the melody overall – quite often it’s reaching for the surrounding notes and what might sound jangled to you at first, you’ll grow to appreciate.

See? Here’s the problem! I say “Stars” is the standout – and then that song leads right into “Nothing to Say” – and when that happens I fall in love with this song all over again. I’m starting to think that whatever song off of A Place I Know You’ll Love that I’m listening to becomes my favorite during that moment. The drums, the absolutely beautiful cultural guitar…the absolutely convincing and compelling performance of LL on her vocals – all make this track such a unique moment in time.

The feeling doesn’t let up or stop throughout the rest of the album – this is beyond strong all the way through. Believe me when I say I took a LOT of time with this review. I listened over and over and over to make sure that I was hearing all of these fantastic things about Lizzy Lehman that I’m describing to you. I double checked to make sure I still owned hard rock, and the mirror to make sure my beard was still growing…yep – I’m the same old me.

Good authentic music will always enjoy that luxury of being able to bring in people from other genres. Once I got past that point of listening to only what I liked in life – I became about listening to the best of the best of everything. I think this completely holds up as an incredible album – the mainstream can SUCK IT; if this is where indie is at – I’m NEVER leaving and I’ll never stop listening. Congratulations Lizzy Lehman – you’ve put together a timeless album that I know will be around in my own personal catalog for years and years to come – and I know I can’t be alone in that. Your passion for what you do and your songwriting craft shine through radiantly. A Place I Know You’ll Love is an album full of music worth listening to – and wherever this place might be – I want to go to there.