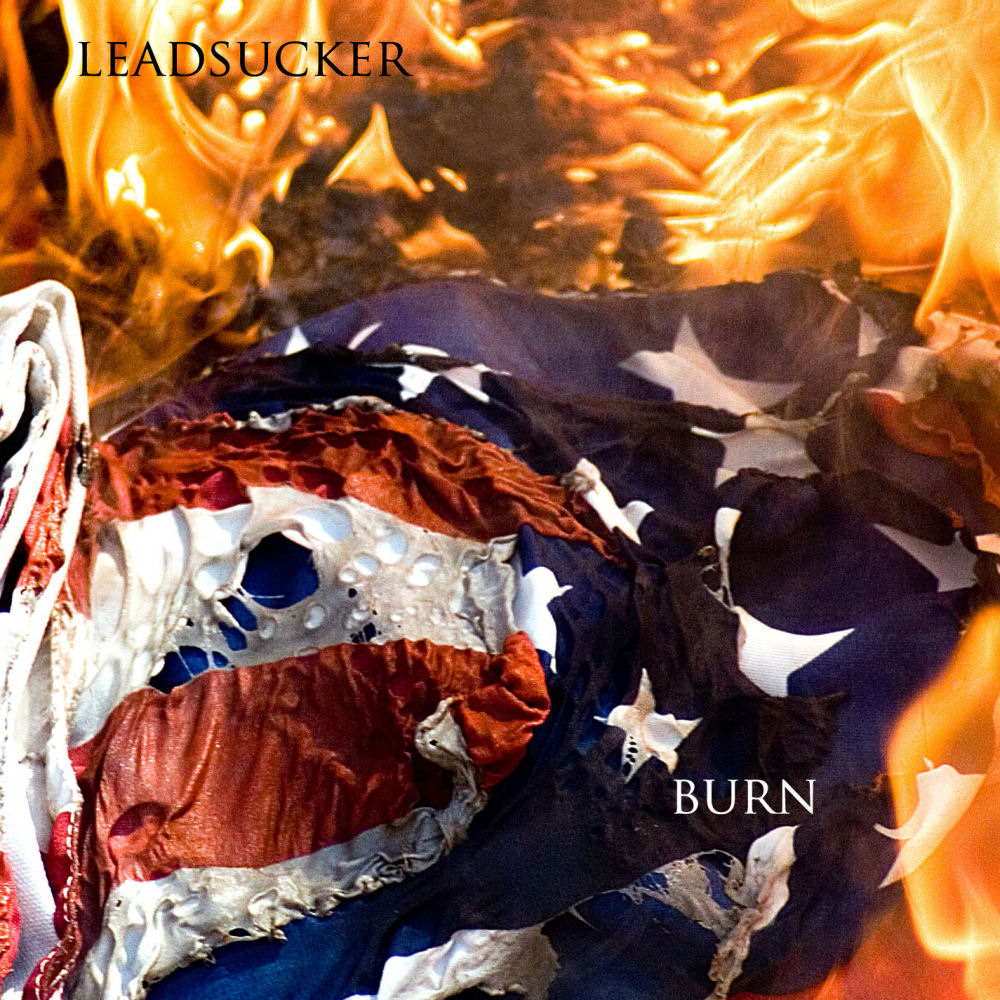 I have to admit – it’s not every day that I’ll find an album with THIRTY songs on it that spans a total length less than any of the TEN-song Weezer albums out there, but that’s exactly what you’re in for here today in this review of the new album called Burn by hardcore punk band Leadsucker. I’ll also admit that there have been many times where I THOUGHT I was listening to hardcore punk, but after listening to Leadsucker I’ve decided to redefine the parameters of that particular category. THIS is as hardcore as it gets ladies and gentlemen; Burn is an album that EXPLODES straight out of the gate – and it never stops for a single second from there. If you are looking for the next industry-fabricated super-ballad, well, you’re certainly in the wrong place today!

There are many completely fascinating elements at work on this album. I think for myself – the one that peaked my curiosity more than the rest was the sharp contrast between the amount of knowledge displayed through the lyrics and the amazingly short track lengths. I know, I know – I’m WEIRD. I GET IT. But follow me down this rabbit-hole for a second…

Leadsucker has made an album that has multiple facets and layers. What could be instantly dismissed as music for the A.D.D. – is much more than you might think at first. The songs are completely frantic, chaotic and PUNCH YOU IN THE FACE as hard as any song ever could. But within all of these elements lie the puzzle of Leadsucker itself. You could easily move-on from one song to the next – but the point of this album and the way that it is made is to hear SOMETHING that makes you go back and ask more questions about what you’re listening to. This is not surface level music, even in the slightest.

Now – you all know what a giant fan of melody I am, and of bands like R.E.M. and The Cure; to claim that this album is in my musical wheelhouse would be nothing short of an extreme lie. As I had said before, I once THOUGHT I had heard hardcore punk…but now…now I KNOW what it is, all thanks being to Leadsucker.

So what’s in it for me? I like a challenge. I like mystery. I like bands with something to SAY and something to PROVE. For as in-your-face as the music can be – there’s actually so much going on that I couldn’t help but to listen to the album in complete entirety at first and then believe it or not – I went straight back multiple times to listen to what each and every element of this band is doing. The drumming is played with tremendous skill & genuine feel and the guitars and bass just totally feed and shred off that energy, creating songs that sound like the stereo you’re listening to it on might implode the minute the last song ends. You can hear something like this and recall the mighty Lee Ving of the band Fear – known to many of the younger generation as the OTHER crazy maniac in Dave Grohl’s Sound City movie aside from Dave himself.

But what’s that you SAY?

While specifically throwing you songs that rip by within literal seconds (No joke – only FOUR of the thirty songs are one-minute or longer…but never even close to two minutes!) the lyrics demand extra attention. Burn is actually as political of an album as you can get with lyrics that don’t waste the meaning of a single word.

But for real – what’s that you SAY?

The words themselves would be hard to make out for most and here we find an element of exclusivity – you’d be missing much of the point of Leadsucker’s music if you couldn’t get past all the distortion and frantic delivery of the vocals. But if you can – there’s a whole slew of information, passion and delivery in these words – don’t let titles like “The Color Of Justice Is White” throw you off like it did for myself upon reading the title for the first time (Read my blog post, Sept. 22nd!) – there’s no overtones of brutal hatred on this album so much as there is a desperation for change and social equality.

While the overall music that Leadsucker has put together for Burn might not be made for the masses – it IS made for those that want to listen to an album the same way they’ve watched their favorite movie twenty times to absorb all the details. As a person that listens to all kinds of music each and every day – I’ll admit just one more thing to you… I completely and thoroughly enjoyed learning about this band, listening to this album, reading the words and going on the journey WITH the band as this album played through.

And if you’re really hearing what they have to say – there’s no exclusivity factor whatsoever. There’s room for everyone that can truly hear their message; in fact, it’s damn near a musical call-to-arms.