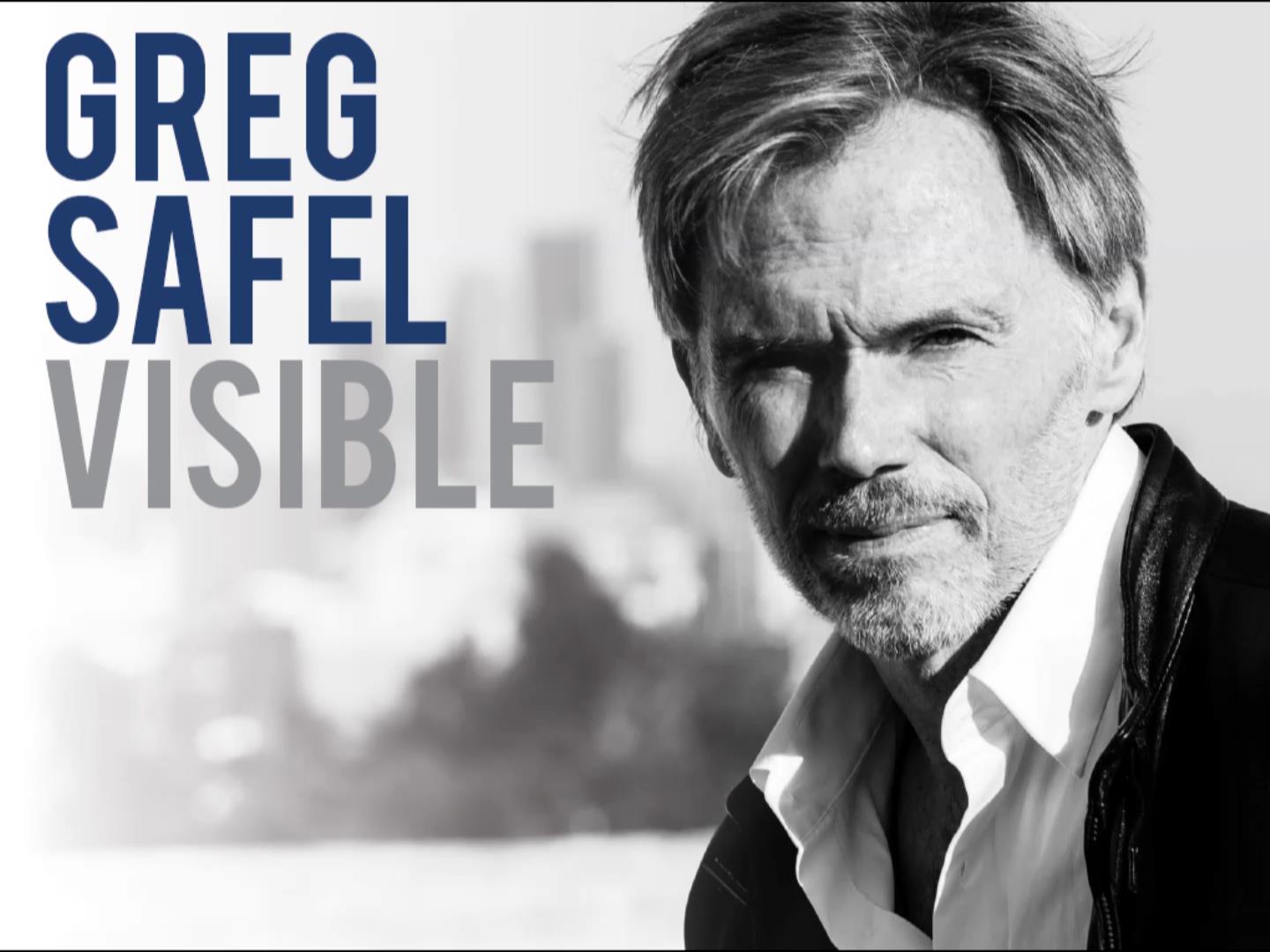 How about first I make a sincere, heartfelt apology to singer/performer Greg Safel, our artist in review today after what has been entirely too long…I’ve had this on my desktop for some time now, and I have to admit to the folder it’s in looking exactly like the other million folders that are here. It can happen…we all know what life can be like…but the man is laying out his debut & heart on the line here on his new album Visible…last thing I want to do is give the man a complex and think I didn’t listen or didn’t like it – which, by now…is potentially a possibility as I am way overdue on talking about this one! Truly sorry Greg! I assure you, it’s been thoroughly listened to along the way – so let’s get into it all after long last and talk about what is actually quite a unique album to have come our way with Safel’s new record.

All cover-songs…this is really the evaluation of Greg’s performance and interpretation of his approach and renditions of the songs on Visible. Beginning with “Roads” – I’ll have to admit, many of these songs were familiar to me in the sense that I felt like I’ve heard many along the way…but not too many that I was directly familiar with. What was impressive was the range of genres and styles he’s pulled from in effort to create this debut; and his ability to adapt them to his own strengths is pretty darn inspiring. “Roads” is a great opening…especially considering that this is a debut. Greg sings with a growing confidence as the track plays on, the music provided by a whole team of ace-musicians ready to supply the perfect timing, sounds and setting for Safel to work his magic. He doesn’t shy away from any of the soaring notes that “Roads” demands and calls for, going after the biggest of the big notes with just as much confidence as the rest.

It’s all even in the mix and pleasant, inviting & warm sounding so far…and it’ll continue on into the theatrics of “Sunday In New York.” Now…there’s no hiding the fact that this type of Broadway-esque tune is not the kind you often find on my playlists outside of these reviews…but I also can’t hide the fact that Safel’s performance simply makes me smile here. “Sunday In New York” is a much larger indication of the confidence that Greg has as a performer than “Roads” had initially revealed, and that’s alright – not supposed to give it ALL away in that first song anyhow; but what a treat to hear the way he runs through the stylistic vocalizations of “Sunday In New York.” I don’t know Greg personally…but I can certainly tell you that from his energetic & enthusiastic performance on this second tune that the attitude here didn’t happen by any kind of accident – this dude is clearly a show-tunes guy, you can tell he’s loving every minute of “Sunday In New York.” Nothing better than when you can really hear an artist in the moment and right into their music like this…no matter the genre, gotta admire that genuine authenticity that comes out when you’re doing what you love like Greg is clearly here. The slow-tempo, gently-approached “Good Thing Going” will stay in that theatrical-vein, just toned down slightly by comparison to “Sunday In New York” – but the asides to the microphone (and us directly) still have that written-to-perform feel that he’s embracing quickly here at the beginning of the album. “Good Thing Going” is a sweet tune…a little more accessible as it’s a little more off-Broadway than the previous track.

Some of these tunes of course might be more recognizable to you than others. “California Dreamin’” was one of those for me…and when being a lot more familiar with the original, it’s also a lot more rewarding to hear how Greg has adapted these songs to his own style. You often see talent shows of all-kinds on television where the judges talk about how they ‘made that song their own’ – and to Greg’s credit here, I think he’s made a memorable moment out of “California Dreamin’” with a stellar cover of a classic tune. With a completely different approach, it starts piano-led before bringing in Greg along with strings, bass, percussion, guitars…there’s a fantastic build here to a song that would be heavily scrutinized as people love it so, so much. I’d be confident in saying Safel hasn’t wasted your time whatsoever here – this is certainly a worthy cover with an all-new perspective on the sound; heck, the guitar-solo alone will sell you on this one but overall, this is all working well.

He’s clearly competent and capable. Being a debut-record, it’d be nearly an impossible task to not show a few slight cracks here & there along the way…and there are a few in his voice here and there – but often you’ll find that those moments give it a live-HUMAN feel to it. I’m sure you’ve all noticed the absence of auto-tuner here on Greg’s record…this is all him you’re hearing. Melodies like “Being Alive” and “Unexpressed” both have their moments where he’s hitting a confident-stride and bringing these performances to life extremely well. There’s still room for him to grow, but you’ll hear few moments to indicate or point to that on this record – he’s clearly been waiting for his moment to come and now that it has, he’s given it everything he’s got. Songs like “It All Fades Away” are a highlight of that culmination. You can hear Greg fill with confidence as the music swells and grows around him with a solid-performance that brings out some of the very best in himself and the musicians on Visible so far. He sounds fantastic as he soars into the third minute with random-vocalizations and takes hold of the song confidently right to the end on “It All Fades Away.”

No accident either that Steven Sondheim is the original writer of several tunes on Visible – his style of theatrics definitely play to Greg’s strengths. Performance is a very large part of this singer’s talent and he flexes his ability to entertain when the moment calls for it, ready on command like you’ll find him on “The Miller’s Son.” He’s done really well here in my opinion…again, not so much my normal thing but his convincing & committed performance of this song really sells it. I’m more of a fan of the lower-toned verses on “The Miller’s Son” than the rest…but I also think that might have to do with it being something different on Visible that we’d yet to uncover.

On a psychological-level…cover-songs often reveal a lot about us. Not only do the choices of songs indicate a lot about any artist or band, but also the connection you can hear they have to it. We’ve all heard the cover-tune that sounded like the band didn’t even care they were playing it…because chances are they were told it was a great idea by their management team. You won’t get that here from Greg – his performance of “Not My Father’s Son” by Cyndi Lauper is one that highlights that connection…by merely making the choice to include this is a statement in itself. Safel sings this one with real texture and added emotion you can hear…there’s a deeper connection and importance of this song to him that sounds personal and his sincerity comes through shining here with a solid delivery of this melody.

There are a few moments in the record, where sounds & songs tend to blend a little too much into themselves and often sound very similar despite being different songs. Greg has a style of song he digs on clearly, and many of the choices reflect that personal-taste and showcase his talent, but the variation in the overall sound song-to-song is not massively widespread. Moments like “Being Alive” and “Unexpressed” together…moments like “Not My Father’s Son,” and “Love’s Never Lost” back-to-back can feel a little lengthy if it’s outside your typical taste or mood that you’re in. The songs aren’t short by any means to begin with – and no one can blame a guy for playing to his strengths to form an impressive debut like this…but in the future I’d expect to find a little more variation in the tone & atmospheres of the songs he’ll choose…just a hunch.

He performs the sweet, forlorn melody of the melancholy “Love’s Never Lost” with a beautiful approach to the narrative in the lyrics, backed perfectly by the mood the music provides. The whole band has been impressive in behind Greg and assisted him fantastically with their inspired performances. In particular, the jazzy-nature to the piano on “Flight” stands out as a real highlight once this song really begins to soar. Right around the two-minute mark, Greg puts in one of the biggest notes on the entire record and absolutely hits the mark dead-on revealing how precise, how focused and how stunning he can be at the height of his talent & ability.

Now…I’ve gotta say…”A Dream Is A Wish Your Heart Makes/Dream On” is brilliant…BUT…that being said…I’m not quite sure it achieved what he was looking for or not…this one’s a little puzzling. In an awesome way, I assure you…but…like…isn’t the piano CREEPY in this song? If that’s the intent…then I’m assuming we’re all good here and that I’ve got it. After all, it does lead-in direct to Aerosmith’s “Dream On” – so you know there’s a good chance that a surreal/creeped-out beginning to it was the intention. It makes for a fantastic combination in the music-choices and they tie in together perfectly. Musically, I think it works…vocally…I wouldn’t fault Greg for not being Steven Tyler, he sings this one fine and certainly in his own style…whether or not that will work for you is another thing. There’s merit in the cover and it’s solid through Greg’s theatrical-perspective in the approach…but overall maybe the tone of the vocals sat up a bit too high for me to want to kick Steven to the curb in favour of this cover…but I don’t hear anything here I’d fault Greg for. His commitment to his own style and sound has been a big part of this record and I wouldn’t have expected that to change right here at the end anyhow; but when you consider just how hard it can be to establish that signature sound over the course of an entire career, let alone on a debut-record…gotta say I’m impressed with Greg. Definitely feel like that’s a voice I’d easily recognize in the future and that says a lot about the impact, connection & performance of the songs he’s chosen and put his heart into on Visible…you’ll feel it too.

Find out more from his official page at: http://www.gregsafel.com