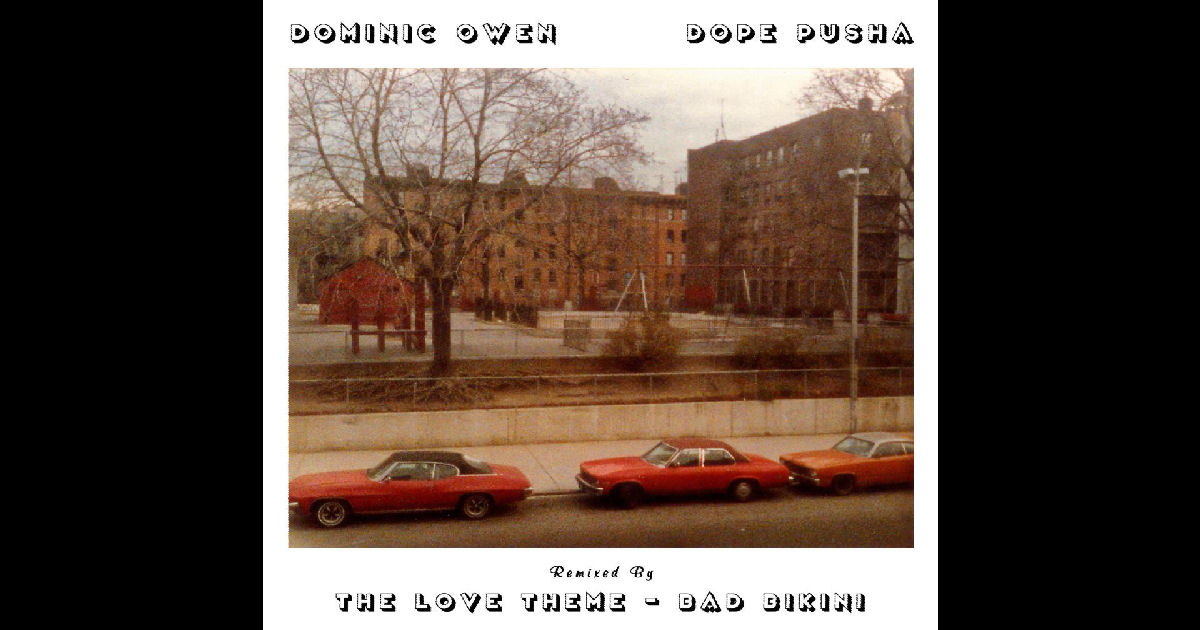 This is how you get it done son – Dominic Owen proves that a great cut can have an amazing second life…and a third…and a fourth!  Remixing a HOT jam from an album of Owen’s called the Big Band Theory, these three new variations of the original all serve their own unique purpose, have their own style, and wildly entertain through verifiably awesome variations that all bring something big & meaty to the speakers.  Served up three ways – the Dope Pusha EP is hot & fresh & ready to be turned all the way up – let’s do this…

Beginning with a mix from the man himself, Dominic Owen gets the EP crackin’ quickly with the “Dope Pusha (Dominic Owen Funk Explosion Remix),” making amazing use of the bass-line grooves and highlight musicianship featured in the music samples of the original and taking them all for an extraordinary ride in a smooth new setting.  Honestly, I don’t think you can find fault here whatsoever; that applies to the opening cut and also to the following remixes…this three-track EP spins incredibly well and keeps the audio-entertainment flowing brilliantly.  The way the ‘Dominic Owen Funk Explosion Remix’ uses the vocal-samples and threads them so flawlessly into the mix of funked-out bass-lines and wild guitar tones, flute samples and smart electro additions along the way is truly a commendable effort.  It’s the kind of mix that you can sit back and really marvel at while you enjoy it – the construction of this beat and movement of this ‘Funk Explosion Remix’ from Dominic Owen is high quality entertainment for the ears, straight-up.  The more you dig into this opening remix of “Dope Pusha” the more you get right into the production, the stunning clarity of the sound, and the expertise of which this entire jam is assembled…it’s as remarkably well put together as it is wildly rhythmic & groovy to take-in.  Of the three mixes you’ll find on this EP, I felt like the “Dope Pusha (Dominic Owen Funk Explosion Remix)” really hit the mark dead-on for the way it used the vocal samples and worked those bass-lines…excellent opening to the entire experience and the hot roll that the Dope Pusha EP is on continues on strongly from there.

Like I was saying at the beginning – each mix has its own personality, character, charm & appeal – which is quite honestly what makes listening to this EP such a stunning experience.  Theoretically…for most people…taking an existing track and serving it up three-ways is still going to be too much of the original on repeat for most people, because generally speaking, when this has been attempted in the past by electro-artists or bands & projects out there, I’d say 90% of the time it falls flat.  Most of the reason that is, is because those mixes DON’T wander off too far from the originals and more or less seek to feed off their existing strengths, rather than add their own.  What makes this EP seriously fantastic is the fact that Dominic Owen and some talented collaborators have really made each of these songs stand out for their own personality and pushed the song itself to become MORE and explore the ‘what could have beens’ in completely different variations.  That matters and counts for something doesn’t it?  I think it does!  Of course…it’s not a strategy that’s always going to work out for all artists/bands out there – but opening yourself up to allow your art & efforts to live-on in extraordinary new ways couldn’t ever possibly be a bad thing right?  Not in my books.  I mean think about it…even if you’ve scored a hit with a great song years ago – the ol’ adage of ‘a great song is never finished, only abandoned’ still completely applies…take it out of the box you’ve got it in, send those stem-tracks over to someone else – who KNOWS what might come out of it!  That’s how creativity can blossom into incredible moments & unforgettable experiences in music that can never be duplicated…that’s how songs like the “Dope Pusha” remix by The Love Theme come into existence.  It’s a highlight example of how to breathe a beautiful breath of fresh air into the lungs of a song and create something compellingly new to hear.  I don’t want anyone to get me wrong…selecting ANY of these tracks as the ultimate favorite would pretty much be impossible, because they’ve all come out sounding spectacular…and I LOVE me some FUNK – BUT…I suppose if I was pinned down to the mat & forced to give just ONE answer…there’s a really damn good chance that it would go to this remix by The Love Theme.  This particular version takes me right back to the heyday of my own experience exploring electro-music and discovering amazing & inventive sounds like Boards Of Canada and Prefuse 73 for the very first time.  The “Dope Pusha (The Love Theme Remix)” is expertly crafted for a hypnotically-smooth & chilled-out glide through the dreamy-side of this EP’s personality…something about the immaculate use of space and clarity in the mix – I really loved the subtle way that this version glides along and how wonderfully pronounced the electro-melody is.  In the backing layers, The Love Theme have just as many exceptional elements in the music happening as there are up-front, so listen close and listen good…because that clarity is stunning and the tones of the entire vibe on this mix are the kind that head straight for the soul to connect & resonate permanently within you.  There’s still more than enough happening & changing throughout the transitions of “Dope Pusha (The Love Theme Remix)” to keep the ears listening and attentive – overall, I think this version stands-out for its exceptional use of melody in the music and the truly stunning pace & production as well.

The third installment of this trilogy of remixes is the “Dope Pusha (Bad Bikini Remix)” – and if you dig your electro with a bit more razzle & flash, a bit more of a disco atmosphere, a bit more of a danceable vibe – this would be your stop to get off and bust out those moves you’ve been waiting to flex out there on the dance-floor.  THIS…is freakin’ VIBRANT at every moment and extremely enticing to the ears, I have no doubt about that whatsoever and I’m sure most everyone out there would agree with that assessment.  We all like different things of course…which is why the chilled-out groove explored by The Love Theme on the previous remix hit the spot so satisfyingly for me personally – but there’s pretty much no stopping this final version as being the one I’d assume most people out there would naturally latch onto first.  I felt like there was something really noble, understated & humble about the opening track and how Dominic Owen mixed the ‘Funk Explosion Remix’ in a more subtle, but equally exciting way without being quite as flashy or in-your-face with the sound like you’ll find on the ‘Bad Bikini Remix.’  That being said, I think it’s still inarguable as to which version is likely to grab the most attention from the ears out there…and nearly forty-seconds in, when the ‘Bad Bikini Remix’ starts bumping its insatiable rhythm & groove with spectacular violin samples filling the air along with the beat – I mean, c’mon now…you’d have to be built of something stronger than steel to be able to resist that sound!  It’s a remix designed for turning good-times into great-times – and it completely delivers on its promise, fulfilling that potential at every moment and packing in a maximum amount of surging energy and bright melody into this track as it pulses and grooves to a seriously spectacular conclusion of the Dope Pusha EP.  Honestly – what about this entire experience hasn’t been as good as it gets out there?  I thought this was truly phenomenal to listen to…especially considering that these are three new ideas born out of one original…the Dope Pusha EP is a real testament to innovation, ingenuity and imagination in music.

Find out more about Dominic Owen from his official homepage at http://www.dominicowen.net