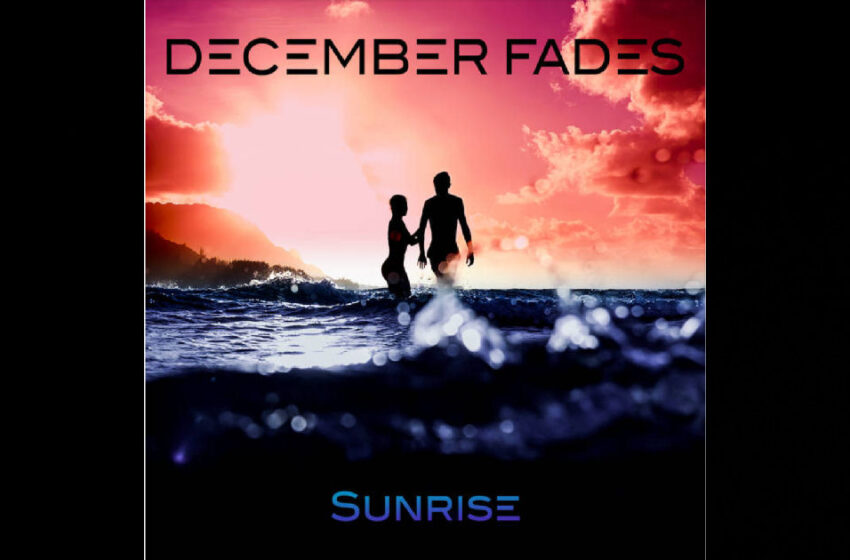 Look.  I’ll be real with ya…I think you’d pretty much have to be made of pure granite stone to resist this new single “Sunrise” by December Fades.

While I’d love to think that’s just an opinion, there’s a really good chance that’ll prove to be a fact – and quickly.  “Sunrise” just came out the other day officially here in this good ol’ month of October, and I’d be more than willing to be the court of public opinion will have no problem at all delivering its verdict instantaneously.  “Sunrise” isn’t the kind of cut that takes you a whole bunch of spins to decide whether not you like this part or that part – you’ll like ALL of what you hear in this single, that’s what I’m saying.

I don’t know much, but I know the sound of something well worth waiting for – and this is certainly that.  From what I can tell, the dude at the center of this chilled out sound you hear, Kevin Rogers – he’s been away for a hot minute or two.  Looks like from what I can see online, he dropped his first cut “Fight” on the internet back in 2015, released his debut EP called Is It Love? officially two years later in 2017, before eventually releasing the heartfelt & insightful, tributary track “Say Their Names” last year.  Then you hear this new single, “Sunrise,” and if you’re anything at all like me, you’ll instantly start wondering what the heck Kevin might have been up to all this time when he’s clearly meant to be making music.  This dude’s got craft, he’s got skill, and he’s got real material here – honestly, I can’t imagine a world where the overall consensus on a cut like “Sunrise” doesn’t work out in Kevin’s favor.

So…yeah…I mean…I really don’t know what the guy’s been doin’ or what’s been keepin’ him away for the majority of the past three to four years…the stunning perfection you’ll hear in “Sunrise” WILL at least have you considering that maybe, just maybe, he’s been working on this ONE tune the whole time!  Which while I’m certain that’s not the case, even if it WAS – when you’re rewarded for whatever time you spend dedicated to making music with a flawless tune…well…isn’t that completely worth it?  The point I’m really making is that Kevin’s put the attention to detail into every ticking second of this cut from the depth in its production & getting the maximum pulse out of the low-end synths, to the sincere melody he sings overtop – nothing here has been overlooked & absolutely everything is in its right place.

Truly, he’s left us all nothing to complain about – and to boot, he’s a really insightful lyricist as well.  I dig that there are fantastically interpretive qualities woven into the fabric of his words.  Essentially, this a love song at its core, but you’ll find the whole concepts driving “Sunrise” can also apply to life in a whole variety of ways.  It’s about appreciating the moment, and the desperate wanting of another just like it – it doesn’t have to be any different than it just was, but the craving for a repeat of that very same exquisite specialness shared & experienced, however you’ve found it.  Yes chances are it’s a significant other that’ll induce the strongest connections in how you relate to the lyrics most likely…”Sunrise” is ultimately about true love in its purest form – and songs like this really are built to be the soundtrack to your own blossoming romances out there.  Because you ALL know that feeling, especially as you start venturing into a new relationship…another minute, another day, another “Sunrise” is EVERYTHING, and it’s all you can think about…all you want…all you dream about.  And when you find that true love, believe me, you’ll know – and it’ll be exactly like December Fades describes so perfectly in the lyrics of “Sunrise” when Kevin sings “this true love we’ve found…infinite & invincible, sacred souls are unsinkable” – that’s the exact feeling it’ll give ya…like a coat of confidence you can wear everywhere you go, that’s every bit as warm & comforting as this very song is.  Kevin’s done an exceptional job on this cut – the mellow Electro vibes are a brilliant complement to his poetry in motion, and he’s put the heart into this song through a stellar performance that brings all the emotion to the words that you really wanna hear.  He makes this moment as vividly dreamy as it is grounded & atmospheric…but most importantly, the performance he puts in, makes everything you’ll hear from the sentiment to the sound, 100% real for us.

Find out more about December Fades at the official website at:  https://www.decemberfades.com