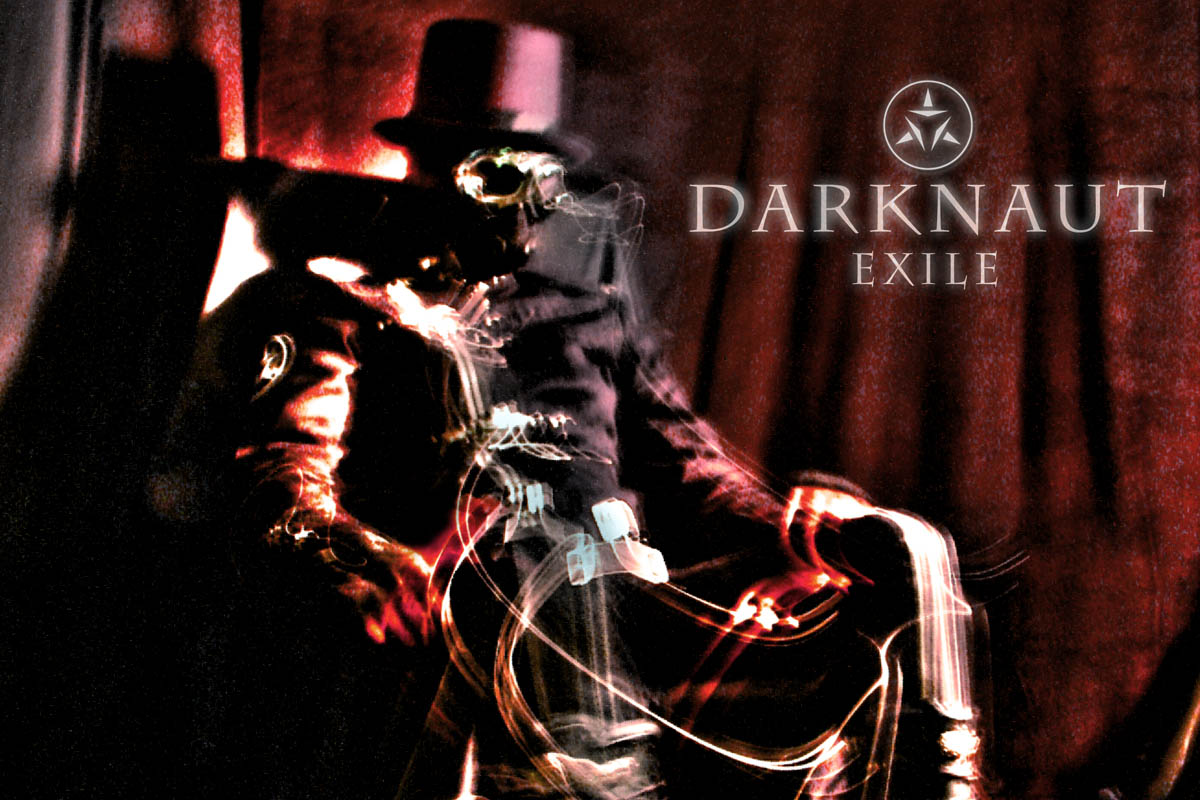 Whether you’d call it synthwave, darkwave, ambitious-electro or something else entirely…whether you’re one of those people that considers everything electronic to be electronica…whatever it is you want to call it – one thing I think has become more & more clear with one of music’s youngest genres over time that we can all agree on is that it’s become a highly expressive form of music when done right.  Darknaut has just released the Exile EP…a set of four tunes that really take on the artistic ability of electro-expression and proves the genre still has plenty of room to explore progressive ideas & come out with something that sounds fresh & new to the ears.

As it begins, “A Kind Of Space” quickly digs in to its sharp electro rhythms and melodies, layered with rad vocal-samples and smart transitions along with multi-faceted electro-sounds coming from all over the place.  Don’t get me wrong – Darknaut is in full control of where those sounds are coming from…but they’ve certainly been designed to come at you from all angles of the lefts & rights, that much is clear.  Cleverly shifting through different hooks and lead-parts, “A Kind Of Space” highlights the adventurous nature of the music Darknaut makes and establishes that signature aspect of the Darknaut sound immediately; after you’ve fully digested the Exile EP, you’ll understand more-so that the transformative and ever-changing electro-landscapes of the music are staples of the Darknaut sound, ideas & ambition.  Through the depth of its production and the punch of its mechanical sound, “A Kind Of Space” sets the tone instantly with a range of sonics on display from the explosive to the exploratory.

Exile smartly continues to speak subtly through a quick vocal-sample at the beginning before launching into a set of sounds much brighter & bolder on “Mind Dominion” than we heard on the opening track, until it eventual spreads out the atmosphere and pace.  I was a lot more mixed on “Mind Dominion” than I was on the wild journey of “A Kind Of Space” – and mostly just from those opening moments…maybe just a bit bright in the mix for me by comparison.  It could have been the rapid-pace of that beginning as well…I just personally lean towards the chilled-out melodies in music as opposed to the frantic stuff for the most part…but again, that’s all just personal taste.  There are some amazing moments throughout “Mind Dominion” when the fully layered beat & synth-pulse gets added in with surrounding vocal samples…I really dig both the way they’re mixed in AND what they’re saying.  Electro-artists & mixtape-makers my friends, I tell ya, you gotta watch those guys and really listen when they throw stuff in there because believe me – a lot of the time that’s where they’re really letting you in on what’s on their mind, just as Darknaut is on “Mind Dominion.”  My favorite moment bar-none on this tune was around a minute-in when the song snapped from its manic-pace to reveal an entirely new texture to the slower sounds that followed…combine that with the eventual bring-back and heightened melody-line in the music and you’ve got all the right ingredients for a killer mid-section, which “Mind Dominion” definitely has.  While the more rapid-moments still have more inclusion throughout the song – I can recognize that a lot of these ideas are Inception-esque…like songs within songs within songs…that kinda thing; so for me…any part I felt like I might have been more iffy about generally resolved the issue by supplying something inarguably awesome just around the corner in the writing and structure of “Mind Dominion.”

Back in the days before there was any grey in this beard of mine, we had this thing called IDM…long before there was even an EDM believe it or not…well…I know Darknaut would believe it; the music on Exile has an immense amount in common with that aspect of the electro-genre.  Listen to the spectacular ways that “The West Hertz Experience” shifts its sound around with sometimes subtle, sometimes jarring transitions…it’s clever stuff and being versatile like this in the structure, writing and composition keeps our ears listening & attentive to what might come next.  I’ll be honest of course, I can’t rant and rave about “The West Hertz Experience” without at least pointing out that we’re far from my familiar chilled-out, slow-moving preference of trip-hop’s hazy-vibe and still close to that pace I’d already expressed my opinion on from “Mind Dominion” – but there are a ton of things I can appreciate from the feverish-pace of this tune from Darknaut.  The synth-lines for instance…they’re no joke whatsoever; complex in structure, expertly played & mixed into the thick of the music.  The vocals-samples are as awesome as they’ve been throughout the EP…and the shifting of the tempo itself towards the end of the track really made “The West Hertz Experience” climb to a higher degree of accessibility.  All of these tunes from the Exile EP roam and wander through a ton of audio terrain to reach their final destinations and last moments…what made “The West Hertz Experience” work even more-so by comparison is just how many twists, turns and transitions are pulled off exceptionally well.

For me personally, I felt like the final tune went on to deliver the most satisfaction.  “Light Or Darkness” is a concept wonderfully realized through the contrasting sounds, textures and atmosphere created by Darknaut…you really feel the amount of balance that’s been added to both sides of the scale & spectrum on this tune.  Sometimes an idea really comes together – and this would certainly be one of them…Darknaut plays this one incredibly intelligently if you ask me…I really think the amount of ‘dark’ and ‘light’ within the music is something you can absolutely hear.  While it never dips too darkly…the uplifting ‘light’ sounds are truly inspiring to the ear and I thought this tune in particular was the perfect choice to send us off with a favorable and memorable impression of the highly-imaginative, inventive & innovative music that Darknaut is confidently creating.  There’s been a solid focus on display throughout this entire experience and as a result, the Exile EP sounds incredibly cohesive and wildly dynamic.

Find out more from the official Darknaut page at:  www.darknaut.com