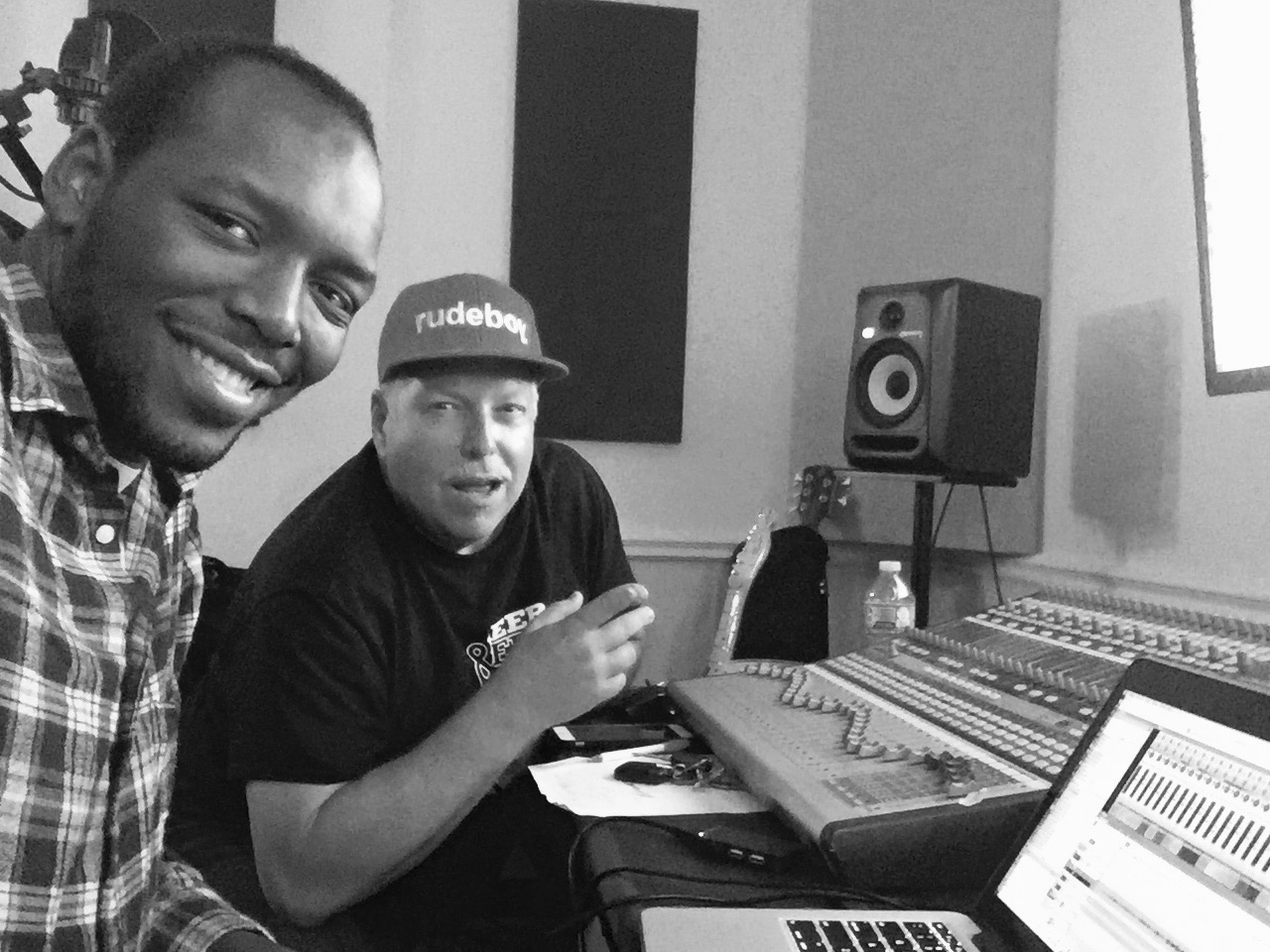 Checkin’ out some of the back-catalog of the humor-inspired, free-spirited music & poetry combinations from Bill Cox again recently…I have a feeling that this guy is making a move to get himself back out there on the scene again pretty soon.  As far as I can tell and from what I’ve listened to, looked at and researched myself – the songs I’ve got in review here today represent the roots and beginnings of what he’d go on to label as Urban Dance Poetry – something that he’s still highly involved in creating today.

Most of these cuts date back to about 5-6 years ago…which is why I’d assume that Bill is firing up the machine and getting ready to come back to the scene with some all-new material.  He’s clearly a creative guy that knows how to have fun with what he’s doing – and we’ve known that at sleepingbagstudios since first putting his animated video for  his single “I Love The Fat Chick” on our show SBS Live This Week.  I remember feeling then much as I do about this song still now – that’s BOLD!  With a title like “I Love The Fat Chick” you can infer that the last thing Bill’s worrying about before he grabs the mic is whether or not what he’s about to say would be considered politically correct…so in listening to his music my best recommendation is to leave your entitlements at the door, relax a little – and just have some damn fun in listening.  The delivery on the words from Bill has its strong moments where it tears itself a bit from the metering and rhyme-scheme a bit, which while sounds like it could be a combination of sometimes having too many or perhaps not the right words sometimes, also ends up working in his favor…those are the moments where “I Love The Fat Chick” becomes real in the experience and Bill’s personality shines through more than when chained to the confines of the melody.  He has the freedom as an Urban Dance Poet however…developing your own genre suggest that the less rules the better and defying typical convention will pay off for him better in the long run – BUT…this was also the first song I’d ever experienced from Bill and admittedly one set back from his early days of developing the entire idea that would end up surrounding it.  “I Love The Fat Chick” has humor, insight and personality that you can easily hear…and again, personally I like musicians/performers like Bill that are willing to take risks.  Will everyone like it?  No!  Of course not!  Now if you please…just direct me towards the comedian you know of that’s 100% universally loved; and no worries, I’ll wait. 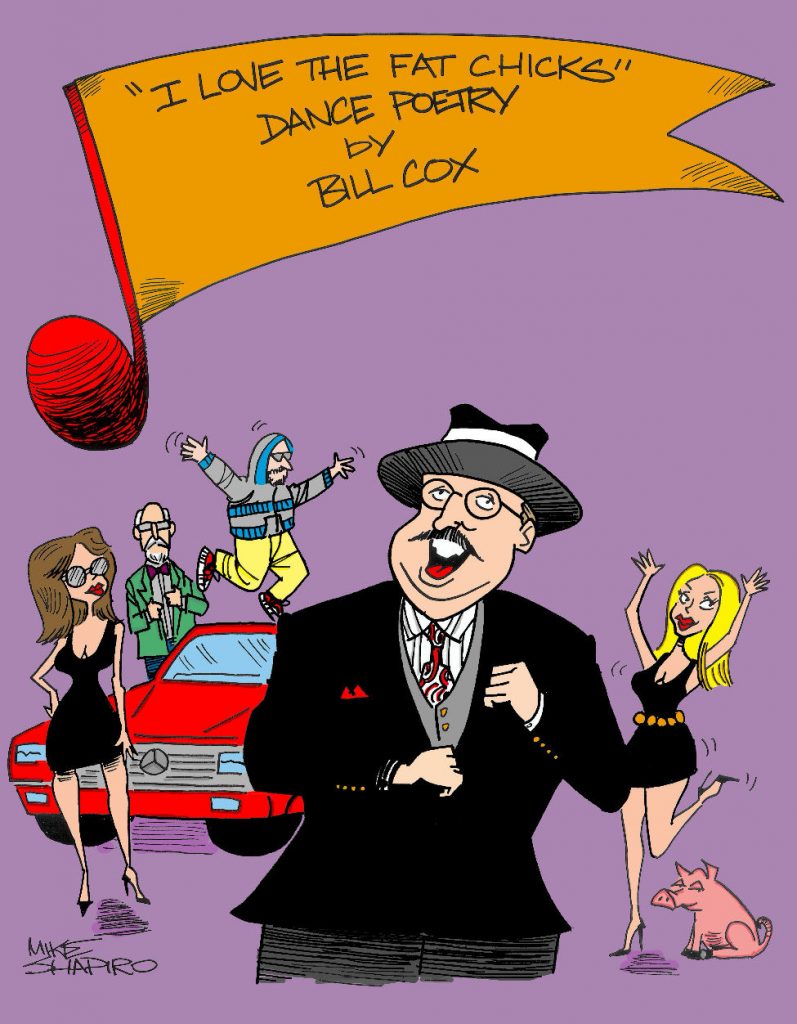 There are a lot of people that WILL enjoy it though…that’s undeniable.  With comedy & spoken-word being altogether more rare out there – Bill has an advantage…an angle…an IN to the music-scene that offers a freedom of expression that most genres out there will never know or explore.  Sometimes it’s just all about presentation and how to bring the material to the people – and in that sense, Bill’s done additional work with these songs he’s written to often give them a second approach.  In the case of “I Love The Fat Chick,” he enlists DJ Johnny “Oh!!” to mashup Ester Dean’s hit “Drop It Low” with Bill’s tune…which in turn by very virtue of the newness of the mashup itself, modernizes the overall sound.  Question would be, I suppose, is does this move ADD to the words aside from potentially adding to the music as well…and that’s a bit harder to say honestly.  I’ll say this…when I know humor is potentially involved – those words become important…that content in what they’re saying is the star; there’s a slight risk being taken when flash & dazzle to the music is being added-in like it is on “Drop It Low Fat Chicks” in the sense that those words are a bit harder to absorb with some much else going on.  That being said…of course I’m comparing it to the original, which is created with much more emphasis on the words themselves as opposed to the music when examined side-by-side; I’m not entirely sure I’d feel the same way if I’d heard these two versions in reverse order because that’s impossible to know now – but I have the feeling I would.  I still want to hear what Bill is saying more than any other element that’s going on…I appreciate both versions of the song in the sense that he’s clearly looking to combine elements of club-culture and hip-hop music into a spoken-word environment – but I also maintain it’s the words that should always feel like the star of the show when it comes to what Bill’s going after.

And while that’s just my opinion…I still think the evidence is there to support that.  Personally, I really like the sound of the dude’s voice – so for me, the original form of “You Took My Girl” was where it was at for me most out of everything I checked out here.  A ‘revenge poem’ that highlights the fact that it’s not ALL fun & games for Bill – you can hear a more serious tone in his demeanor as he delivers the words on this one.  It’s still delivered in a somewhat loose-rap fashion of spoken-word, but I felt like this fit really well.  While there still might be a line or two that brings a smile to your face – for the most part, Bill has switched up his energy and style to smartly suit the atmosphere and musical-environment he’s surrounded in with the added seriousness.  But again – just to stress how smart of a choice that really is – when creating your own signature style like Bill is ambitiously attempting, it’s best to not limit yourself to any one style, sound or direction and I think that “You Took My Girl,” though having similarities to the vibe of “I Love The Fat Chicks” musically, also highlights his ability to read the atmosphere and energy of the music and create verbal content that fits snugly into it.  I mean…he certainly sounds serious enough in the narrative of the storyline of “You Took My Girl” that I already feel like I’ve learned enough to know better than to cross Bill’s path on the shady side of the street if you know what I’m sayin.’  His music is expressive, artistic and unique in its approach…and even here in its early days I think you can hear the potential & freedom that a project like this can lead to in the future.

DJ Johnny “Oh!!” resurfaces to mashup “You Took My Girl” to Rihanna’s “Rude Boy” in what becomes a more successful combination on “Rude Boy Took My Girl” – I felt like the additional space that existed in the Rihanna samples gave Bill’s words more of a platform to be heard on this one.  Still…a lot of the track I did want those vocals to come up just a bit more in the mix…they break through enough and I felt like the advantage in this song goes to a better quality sample-set from the music driving the beat, resulting in what I felt like ended up sounding much closer to the mashup that Bill would be looking for.  So…props to DJ Johnny “Oh!!” for finding a wicked combination of sounds from “Rude Boy” to recreate and mix into “You Took My Girl” – the pacing was solid, the ideas break through and the resulting sound is once again more modernized than its original in this form…it all comes out strongly in a way that has enough crossover appeal to reach into the genres it borrows from.

No doubt about it…he’s a creative character; I’d expect that Bill Cox is cooking up something at all times and we’ll never really know what to assume he’ll put together next within the untapped borders of where his Urban Dance Poetry take him.  Never dull this guy – I’d bank on Bill always having something clever & creative to offer the ears out there.