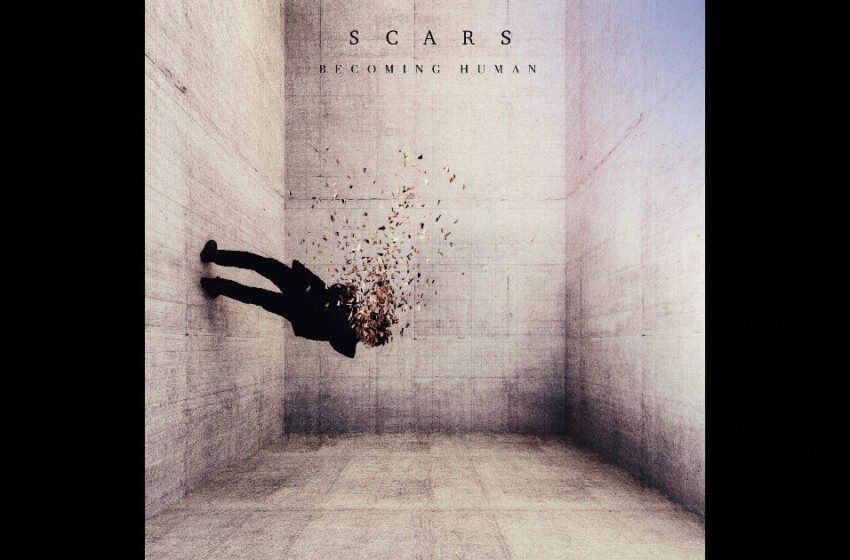 Now…I know I’m here to talk about the debut single from Becoming Human today…the debut ORIGINAL single, that is…but lemme tell ya how pleasing it is to be cruising around the internet and coming across a cover of one of your all-time favorite songs by FAILURE in the process, released only weeks ago!  Don’t get me wrong & don’t get it twisted – I’m digging what I hear on this new cut called “Scars” – but I’ve also got BIG LOVE for the fact that this Texas-based project chose to rock “Another Space Song” as well.  Believe me when I tell ya…whether you’re familiar with that song or not, you wanna check that out too – it’s a brilliant & truly faithful cover.

Anyhow!  “Scars!”  It would be officially out today if I’m not mistaken or getting ahead of myself here.  Y’all know me…I’m writing about things as I’m listening, sometimes that’s in advance of when songs get released & whatnot…but if I’m coordinated for once in my life, I believe this review will come out on the day you’ll be able to find Becoming Human’s debut online, both in audio AND video format.  We’ll know if I had the information right or not in mere moments here…because if it IS out there, I posted it right below these words I’ve just written and you’ve just read!

Jordan Barney…the man at the center of this project, whom incidentally, even kinda looks a lot like Ken Andrews when he’s got his glasses on – has got this track sounding really damn good.  Somewhere in the realm of sound where Alternative meets Pop/Rock, “Scars” is an undeniably tasty treat for the ears, while the lyricism digs deeper to give you a multi-layered experience.  In fact, there’s a solid chance that I might even like the verses of this track more than the chorus…Jordan’s approached this single in the right way in the sense that the hooks are audibly everywhere, and what you’ll hear on “Scars” is bound to catch your attention for one reason or another, or another and another – you get it.  Dude sings it strongly, it’s played perfectly, produced as well as you could ever hope a track would be to listen to, and there’s a completely memorable set of hooks on display in this tune from the moment it starts to the moment it ends.  I’m loving all that stuff…”Scars” is genuinely addictive…probably even more-so than you or I or anyone would even realize on that very first spin, and I’ve been enjoying my advance listening sessions of this song on my playlist ever since I initially pushed play.  The most you’re going to find me conceding to ya is that it’s not a track that’s going to reinvent the wheel…Becoming Human is going to have a bit of a battle in terms of establishing its identity out there at first, but over the course of time, that kind of stuff all falls into place with repetition, and of course, more tunes to listen to.  Of which I’m confident there will be many – what Jordan’s got started here has all the right pieces in place.

All-in-all, it’s kind of what you might imagine something like Fuel and Failure would be like if you could somehow merge the two together.  “Scars” has the robust sound of what I love in Failure, with the tight hooks of something like you’d find in Fuel…and in my opinion, the genuine passion of Barney makes that combination exciting, and well worth your time to listen to.  It’s smartly written from the structure to sound, and the execution is that of no ordinary debut – Jordan’s got plenty of experience to draw on from his past resume, which even includes music we’ve reviewed here on this very site from A Vintage Year back in 2017.  Plus…as time marched on and I went to post up this review today and realized that YES, it is indeed today that the song has been officially released after stalking all Becoming Human’s pages online and realizing it’s not that OTHER band called Becoming Human that’s already out there *cough *cough – I can confirm, the video for “Scars” is kickass too.  I really dig its retro VHS look, I like the way the lyric video works onscreen, and it’s a good fit overall with Jordan in the background super close-up on this tiny little TV set.  I think he’s genuinely onto something here y’all.  I have no doubt whatsoever that this project will continue to evolve and define itself even more as Becoming Human establishes itself in the scene, but I also have no doubt that everything you’ll hear straight outta the gate is full proof that this project is here to compete.  There ain’t a hair out of place here…Jordan’s execution is flawless, the sonic depth of this song is spot-on, the hooks & ideas are there in the sound & the lyricism…I’d be a fool to complain.  So I ain’t gonna!  Instead, I’m gonna advocate on behalf of y’all listening to this track as well.  You should!  Becoming Human’s “Scars” pumps out reliable single-worthy sound that you’re sure to dig.

Find out more about Becoming Human from the official page at Facebook:  https://www.facebook.com/becominghumantx