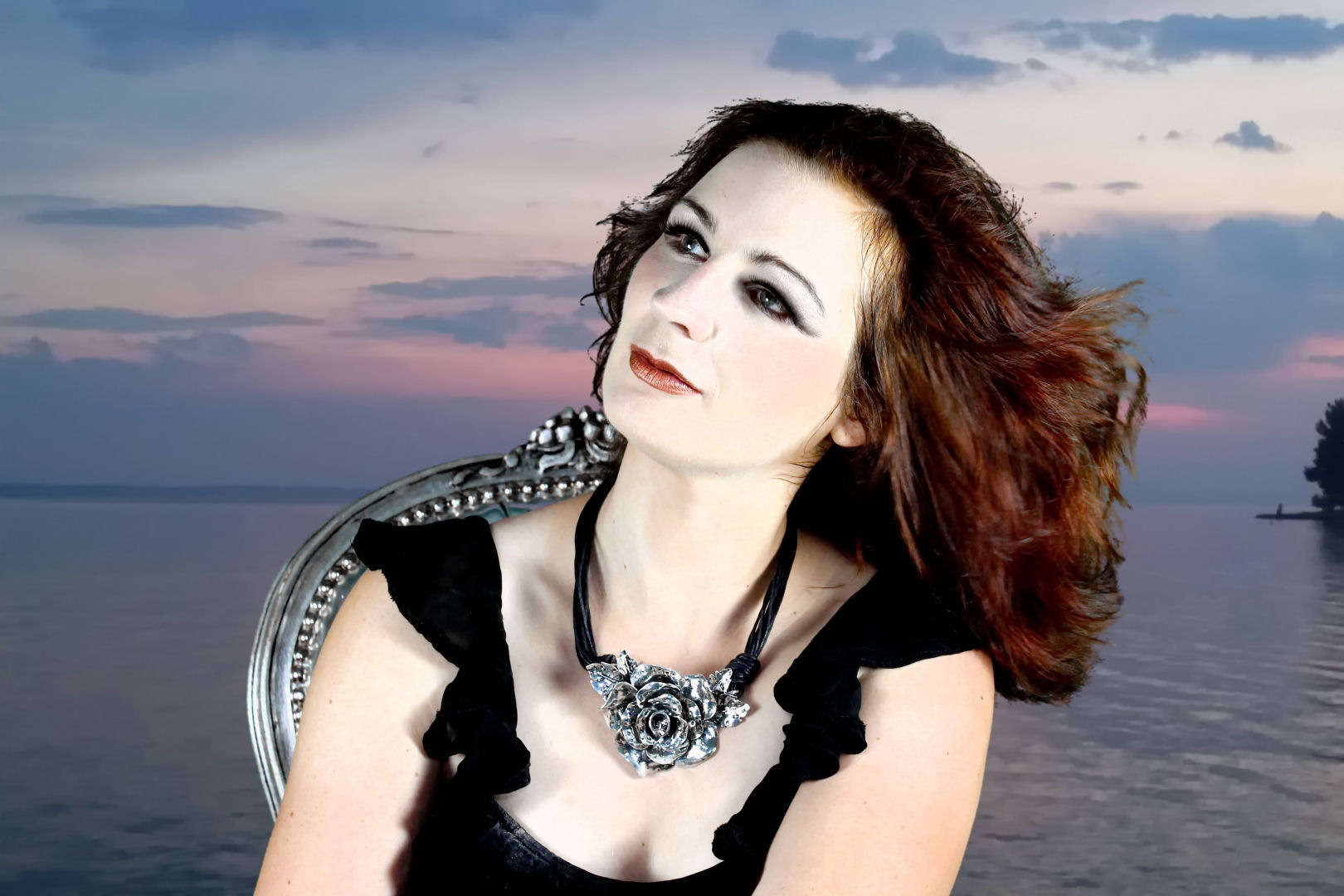 We’re a little ahead of the game on this one…Anna Aliena’s new EP The Muse doesn’t officially come out until October 30th this year – but you know that doesn’t stop me for listening to it now! In fact…it’s always an honour to be able to review someone’s music pre-release; it’s that whole feeling of unwrapping a precious gift on a Christmas come early…which I suppose is a little strange when you consider that this EP is coming out just prior to Halloween this year.

I will be completely honest – I’ve heard music from Germany before…but I’ve actually heard very little recorded in the German Language like Anna has here mainly on The Muse. At first listen…it’s easy to tell that this is outside of my normal realm for what I personally gravitate towards as a music-fan – but that being said, I have a natural fascination that occurs with sounds & music that I’ve never experienced before. I’ve never heard anything that sounds like Anna outside of the theatre, stage-plays, carnivals or movies…it’s interesting to me that this could potentially be ‘the sound’ across the seas from us all here in Canada where music sounds entirely different. So believe me…when I say I’m loving this experience, it’s partly because the experience is unique yes, but also because Anna is actually quite an expressive and impressive singer.

The music tends to match her performances perfectly…it’s clearly well-rehearsed material that she’s found smart ways to fit her operatic-style vocals into. In general, the syllables of the German language seem extremely well-suited to opera-style singing…there’s a lot of passion, expression and emotion put forth from Anna…it’s artistic, beautiful, strong and quite powerful – you don’t need to speak the language to be able to hear what I’ve listed. We all speak, play and create music in some way, shape or form…and in terms of being able to communicate through it, Anna is flawless in that respect. The music supporting her is a mix of classical-meets-theatre, it’s well assembled, played and produced – but there’s not much that could compete with Anna’s incredible voice and she remains the star of the opening tune “Deine Blauen Augen,” and the rest of The Muse EP to follow.

“Die Muse” is a real triumph as far as vocals, singing and performance goes. Again…I have NO IDEA what’s going on in Germany…maybe this is a HUGE sound over there right now, I honestly don’t know – but there should be no problem for Anna & her music finding an audience locally or at least through the massive amount of people online looking for something new to their ears like I do. As I often say…I’m not a big fan of music I would describe as theatrical quite often…but it’s not often made as passionately as this music from Anna is. It’s impressive, captivating and so uniquely engaging in ways I can’t describe…I suppose it’s like any new experience really…as long as you’re open to them, whatever they might be, these are the moments that really provide some enrichment in the ol’ life department. “Die Muse” is a little darker, a little more confident & striking in its melody…I found this to fit my personal taste a bit more than the opening tune did…there’s a mystical and rampant fantasy-element that runs hauntingly through this melody. Anna bursts brightly in the chorus and really climbs mountains octave-for-octave as “Die Muse” continues to evolve & build with audible dramatics.

“I’m Gonna Fly Away” is actually quite a mesmerizing song when you listen to the words. Singing in English…Anna perfectly articulates the struggle between being true to yourself as an artist versus finding success through superficial means. To me, this is an incredible accomplishment…the words & phrasing she has chosen lyrically is brilliantly insightful at times, honest & direct in others…Anna’s done a wonderful job here. Taking it all another step further, “Sasha” is another all-English song she sings that combines her passion and emotion perfectly, with probably her strongest performance on the EP so far. I felt like she started “Sasha” off a little shaky, but by the middle and forward, Anna hits a massive home-run with a very dark & sweet melody. The synth-keys…I dunno…they’ve come up a couple times so far on the EP and I don’t know about the mix of those with the music of Anna in general…it seems a little forced when they come up with their 1980’s video-game sounds. Other than that, it’s soft, melodic music that is quite easy to accept into the ears.

Repeating the title-track in English for us all in the western-world, “The Muse” is performed with just as much vigour, life & energy as it was in the original German language. What a treat it is to get this alternate version though…I like the confirmation it provides; you could tell it was a little bit of a darker tune both musically and lyrically before, but to hear the words gives you all the evidence you need to support the mood of the music and pointed-passion in the vocals. Anna actually reminds me much of British Columbia’s own Kristia Di Gregorio, it seems they both have a beautifully artistic approach to their vocals and how they sing…very, very expressive choices and great instincts in both of them.

Anna clearly has the capabilities, talent, skill and confidence to take on massive productions that are as big as operas, as big as national anthems, as big as that final epic scene in the award-winning movie of the year…songs like “Tvoje Place Oci” go a long way to showcase just how much talent this fine lady truly has. Obviously a lot of time, training and refinement have been put in over the years…but the results are as golden as you could ask for – Anna is a world-class singer. Putting beautiful emotions into the melody of “Tvoje Place Oci,” she’s brightened up the sound just a little for this last tune in the review here and put an uplifting, impassioned-spin into her performance that audibly sounds like victory.

Tremendous job – I wouldn’t have thought this music could be something I’d end up appreciating as much as I have today…and I’d personally like to thank Anna for that, because she’s solely responsible. Again…the music on The Muse is never out of line, never offensive, but also never the star; it would be impossible to standout or shine next to a singer like Anna Aliena – she has a charming, charismatic voice you couldn’t possibly take your attention away from.

Find out more about Anna from her official page at: http://annaaliena.com/