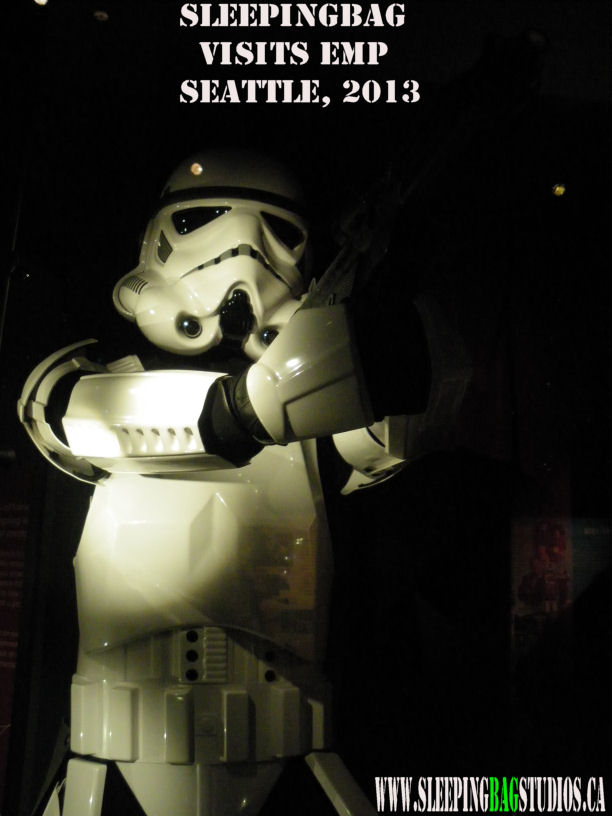 Here’s a look at some of our favourite memories from our history…the SBS Photo Journal!  Gathered from our show SBS Live This Week, live events around local Vancouver, BC & beyond, and from all our random experiences here at the place we love more than anything, sleepingbagstudios.  One of the few places on the planet where I have felt comfortable in my own skin at every moment, Seattle – I love you.  Every time I go there I feel right at home…and of all places in Seattle if I have to be indoors and not just wandering the streets, EMP is pretty much where you’ll find me.

As a fourteen year-old punk-ass kid who thought he knew everything about music way back when even…I used to walk into record-shops on the regular and ask if anyone had the Blew EP by Nirvana…rare, but something I had read about in my endless readings of Michael Azzerad’s Come As You Are.  While there is no official picture in the book and still a while yet before the internet made finding stuff like that super-easy…I was left to be the kid that was basically asking for the mythological and non-existent.  Every person I asked would roll their eyes and tell me what I was looking for didn’t exist; and after years of searching…I actually started to believe them.

When the Nirvana exhibit at EMP was put in, I absolutely had to go down there.  And low and behold…there it was in all its grunge-glory, the Blew EP.  Confirming that I wasn’t completely crazy was half the victory…but laying my eyes on that EP was also a confirmation that the kid I was back then is still the exact same guy I am now at 35.  A rad trip there for several reasons…the Sci-Fi exhibit is full of a whole ton of shit I could care less about & never really understood WHY it’s paired with the music-haven of EMP…but I have to admit, there’s some pretty rad stuff in there too.  Particularly this time around, it had the crystal-ball from the movie The Fountain…and I loved that movie.  It’s completely underrated and largely misunderstood due to director Darren Aronofsky being forced to cut nearly two-fifths of the movie from its theatrical cut.  And anytime you’re being asked to sacrifice your art to satisfy the commercial desires of the suits & ties…there’s bound to be some rough results to say the least.  Anyhow…here’s a look from the first trip from SBS to EMP in 2013!