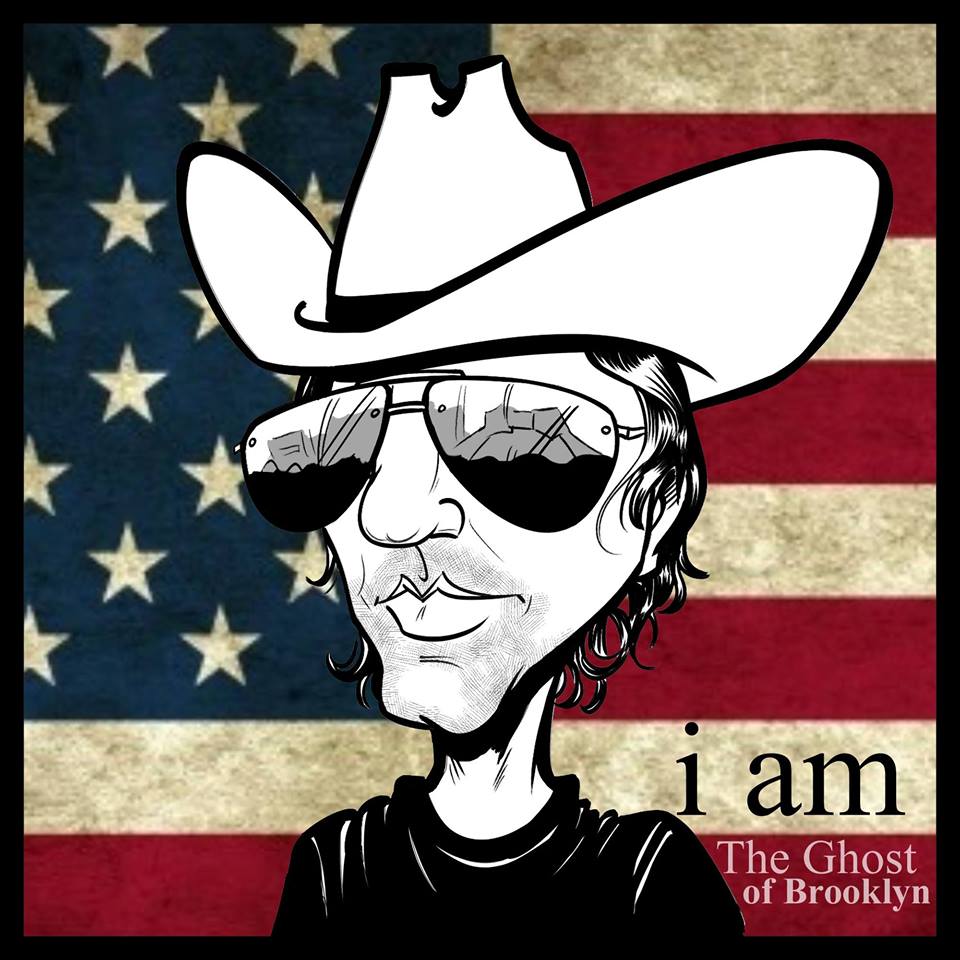 The off-kilter & ultra-imaginative ghoul you love to groove to, The Ghost Of Brooklyn is back with his signature style & sound…which is, quite to his credit, not a sound you’d likely mistake for anyone else out there. It’s music for those that like things a little off the beaten-path…nothing horrific by any stretch…if anything you’ll experience a brief moment or two perhaps wondering if he’s actually catering to a children’s audience as “Strike Zone” starts up his new record. He’s one bouncing-ball and a classroom full of kids short of a full-on sing-along as I Am The Ghost Of Brooklyn begins…but I’d have to admit that it’s a strongly invitational start into the album. If anything it was “Jump” that worried me that The Ghost Of Brooklyn had run out of steam and was now making an album full of children’s tunes. You laugh…but those situations actually come up a lot more frequently than you might think. The opening of I Am The Ghost Of Brooklyn is definitely a welcoming one…but I’ll fully admit I felt like for what I knew already about The Ghost Of Brooklyn…I was worried this might all be a step backwards for a moment.

To think that it took until “1980” to begin to let those fears subside…well…I guess I should be in less of a panic – that’s the year I was born as well as the third-song on the new record…so maybe around the time this album smartens-up a little is the time I begin to exist! And even though I can’t imagine that it would ever be easy to jump into the vocal-melody of The Ghost Of Brooklyn for many people – it’s a sound I personally dig for being as different as it is to the point where it really is a strong signature-aspect in his music. A lot of it tends to sound worn and stretched-out like an old audio-tape…which I personally love hearing from my audiophile-perspective. Though I’m not sure if he was attempting to challenge me once again as I found my way into the smooth-glide of “1980” by incorporating some “Dancin With Myself” from Billy Idol my arch-nemesis in there at the end…but challenge accepted if he was. “1980” is where I Am The Ghost Of Brooklyn started to turn around to become much more palatable to my own ears.

Sweet words and sentiment fuel the rhythm of “One Love” before heading into “Party Down” which really begins to move the album forward with rhythm & groove. “Party Down” is definitely a reflection of the best in The Ghost Of Brooklyn…it’s a bright-melody, lots of fun, lots of rhythm and real-stomp to the beat. Part of me worries for people that aren’t like myself…as much as I dig the sound of those vocals, even I can see that I’m only five-songs into a sixteen-track album where so far the consistency of the vocal sound has the least amount of variation of anything on the record…and that it might be more than a bit much for the rest out there by the end. It’s definitely a risk…by nature alone it becomes signature through its difference to typical singers out there – but by that same token, the formula itself in recording it is a formulaic-one that allows for no other sound or tones than the ones it produces. The result is that tends to make a lot of it sound similar to the ear and much more difficult to separate out track-for-track to the average ear when listening. A perfect example of him making it even MORE challenging for people to love is the addition of static & natural-atmospheres into songs like “Young Man” that make it 10% tougher to make out the lyrics & vocals. People will dig that, or they won’t; I have the feeling that The Ghost Of Brooklyn is well-aware of this and fully-embraces it confidently.

Strengthening the middle of the album are the familiar “Coney Island Baby” which you might know from The Ghost Of Brooklyn’s past, and also “Emily.” While “Coney Island Baby” really stays a highlight in the catalogue of TGOB, perhaps because I was familiar with this tune already, I immediately latched onto the powerful rhythms, grooves and melodies in “Emily” and “Where I Come From” after it played. Great to see and hear the mid-section of an album raise-up the level where a record typically starts to sag; I think the best moments of I Am The Ghost Of Brooklyn occur throughout these songs and represent some of the best execution on his style, sound & ideas. “Where I Come From” is a wicked tune if you ask me…I love the way The Ghost sings this one…that natural sound of his once-human form ringing through a little more clearly through the background…just enough to make the difference. The music is completely inventive…it’s tough to separate really into what’s making what happen…but I know what I like – and I like this.

Taking the rhythm & groove to a more minimal-stomp on “Beautiful Day,” the subtleness of this track resembles similar song-writing to Mellencamp or The Boss in their quieter-rock moments. Definitely some of the strongest hooks on the record and a truly fantastic, uplifting sound to the guitar-line and melody on “Beautiful Day” – it’s as bright and sunny as the title promises.

But while it might shine brightly…it’s rare that a song can stand-out as quickly to me as “Love Lost” did. Immediately the tone, mood and atmosphere do a sharp-turn at this point on the record and take it into a slightly more serious-vibe of sorts. After everything just went right on “Beautiful Day,” “Love Lost” goes on to reveal a personal-collapse of emotions and relationships in its narrative and storyline. The guitar work in this song is just pure-awesome though…I love the way this song sounds, moves and flows…the chorus hook is strong & simplified and The Ghost Of Brooklyn has just made one of my favourite songs of the moment for sure here – I’m loving the fact I found “Love Lost.”

Things do seem to find another vein of strength as the album continually builds as it plays. Much credit to The Ghost Of Brooklyn for that; from the initial doubts and scepticism that came to me upon the initial opening…to where we are now with “Simple Soul” and its tightened-production sounding clear, stunning & spectacular following the epic “Love Lost” – that’s an impressive jump. The layout of I Am The Ghost Of Brooklyn really progresses as it plays…I’ve got a large appreciation for that.

“Simple Soul” keeps it fuzzy & warm in all the right places…a song like this would definitely appeal to fans of Sparklehorse or even the Stereophonics in a way. I really like how amped-up the vocals get and how they break to a clarity in the music as this track makes its way to the end…perfect. “Going Nowhere” was a little tougher in some spots…it changes enough throughout to find something to love in there for everyone…but as a song perhaps a little long in comparison to how right The Ghost typically finds as a length for his melodies and rhythms. Half-size on that one, I think that’d work – it’s a decent song and set of ideas…it’s also definitely in a tough spot on the record to be in after the sweet “Simple Soul” and before the pronounced percussion-led groove of “I’m Still Here.”

“I’m Still Here” is another fantastic example of The Ghost at his best. In between his signature sound on the vocals and a whisper…this track pulses along with a steady groove unlike the rest on the album as it relies less on the guitar and more on the vocals and beats to supply the melody to the song. Works great…definitely a strong song on the album as it heads into its last two songs “Beautiful Girl” and “The Great I Am.” “Beautiful Girl” brings back the indie-rock-pop sound of The Ghost at his jangled-melodic-best…great energy rhythm and melody to this sweet song…kind of like a last taste of what you’ve known and expect from TGOB before the highlight-display of brilliance in the final tune “The Great I Am.” A real switch in style, sound, ideas, tones, production techniques…you can hear a massive evolution right here at the end of this album…and I’d love to know why! One theory would be that this final tune was the last one written…a sign of where The Ghost might head to next…or perhaps this one simply resonates more strongly with him and that connection shows the passion of that in the recording. Whatever the theories are, or even the facts…the reality is that this was a brilliant final-switch in sound and “The Great I Am” delivers a memorable moment at the end of the album to really make you want to re-listen and examine the entire album all-over again to find out how you got to this point.

Truly…that’s an impressive amount of terrain, territory, atmosphere and emotions spread out over a single album when I look over this review. From where it starts, to where it ends…The Ghost Of Brooklyn has put together an impressive journey of jangled-melodies that really evolves throughout its layout & flow. Kind of makes you think of the whole tortoise & the hare thing…doesn’t matter if you start slow as long as you get there in the end right?

Support The Ghost Of Brooklyn at his official Facebook page: https://www.facebook.com/brooklynghost