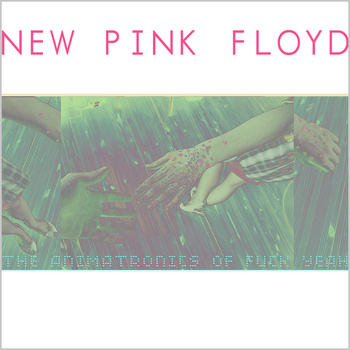 Wow. Are you EVER going to think I’ve gone crazy when you hear what I have to say about this album, The Animatronics Of Fuck Yeah by New Pink Floyd…do I like it? You BET I do – but the WHY is strange! Read on…

First of all – if you’re looking for a musical comparison to the ACTUAL Pink Floyd you will not be finding that here – it simply does not exist – this is entirely different for most. MOST! But I’m not most – as you know I listen to EVERYTHING all day, literally – not like your friends say they do when you ask them for the for the first time.

I’ll say this – there’s not a lot of people doing what they’re doing – so it IS completely fair that when you push play and hear “Test Test” the first track, that you may very well be completely lost. My best comparison comes to a beautiful indie band that I truly love and not many people I’ve met know, or at least they rarely come up in any conversations with me; Casiotone For The Painfully Alone. Anyone?

Much like CFTPA, New Pink Floyd is as experimental as it gets. True blends of electronic freak-out with stylistic poetry guaranteed to polarize with every listen; some will love it, and many will not understand it. Lead vocalist Jaimie Sharkey and her musical cohort Robert Costello have MUCH to fear from the public response, as we all know what humans can be like when they don’t understand something.

Take a track like “Denasa” – one of my favorites from the album. Art and music is it not? YES IT IS. What the two of these people have done is thrown caution to the wind and literally put out an album and a style of music that you’ll either get or you won’t – but I can tell you firsthand that if this is the type of music you’re making, you’re not expecting that anyone WILL get it, because it’s ART – simply existing, living and breathing – simply being made and not carefully considering how an audience might respond.

I applaud that, big time.

Ok – let’s break this down a bit. It’s important to note, that Robert Costello – master sound creator behind the music of this two person band – is a freakin genius. I’d bet money he’s taught himself everything he knows too. He has an absolutely incredible gift for electronica and creating unique, inventive and completely well written beats. You want unique? How about a furiously paced organ coming at you in “Crossed-T’s?” Instantly drives into the minimalist “Up Walk” – another standout track on this album. Jam after jam – Robert proves that he is an enormous contribution and seemingly never-ending source of creativity.

On to Jaimie! First of all – I’ve talked to her plenty online and she’s an incredibly sweet and excellent person. Very pure of heart and I dig that. Her genuine character completely plays the pivotal role in the music of New Pink Floyd – where the real magic comes in. You wanna know the secret? I’ll let you in on it…

You see, Robert – our gifted electronically charged friend, makes incredible MUSIC. Jaimie, using her poetry as the platform for her lyrics and a flair for the dramatic in her style, transcend this duo beyond the music and into performance art. If you were to ask me (and it seems that someone must have!) – I’d say that Jaimie is living in the moment; that is to say her performances are organic and not bound to any static formula. Cool right? She might even be a vocal purist – you know, one of the “what came out was what was meant to come out” kinda people. She uses her voice as an instrument and constantly explores new territory through vocal texture, effects, lyrics and of course that genuine personality we mentioned earlier.

The album begins to close with “Chorus,” the second to last track, highlighting yet another minimalist but completely satisfying beat from Robert before bringing up the tempo once more in the final track “RNA-LA.” Arguably one of the better tracks on the album – they close out on another successful collaboration between the music and words, a final piece of art in this musical gallery.

I’m always impressed by the creativity of our musical world. New Pink Floyd are no exception to that rule; they put an album in my ears that takes me right back to a time where my own band was successfully putting together full tracks and we were fully about the integration of poetry to music. We did then, and we still do, whatever we want to musically. Thank you Jaimie and Robert for reminding me how awesome it is to exercise that freedom, and that we’re not the only ones.

It’s a great reminder for us all. When you picked up whatever it is you played for the first time, there was nothing written – the universe was wide open to you to create and make your own music; New Pink Floyd stand as a reminder that it can still be that way if you want it to be. Robert and Jaimie will certainly go on to create many more sonic journeys from here as well I’m sure.
And as always my friends – you know I’ll be listening.