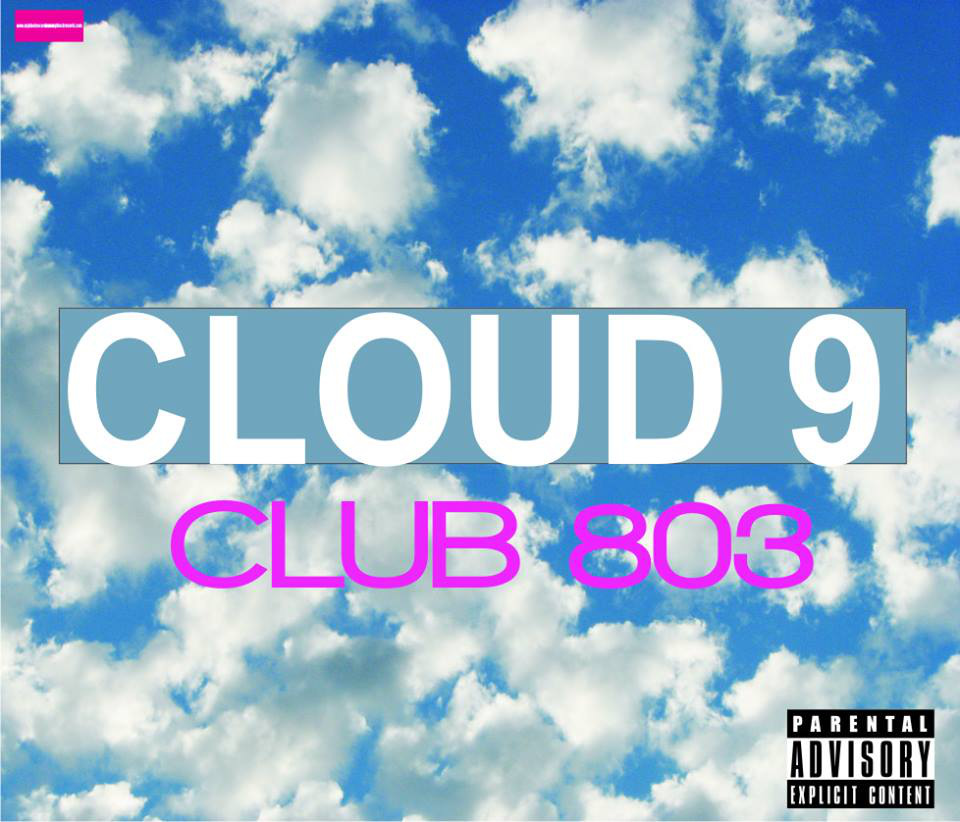 A lot of different aspects of music on display here on this latest album from Club 803, some of them work in spectacularly bright & colourful displays of R&B and hip-hop; others perhaps reveal a group that is still on their way to finding their overall sound or where each performer truly belongs in the mix. I made a point the other day in a different review about starting off an album with dissonant vocal tones…it really does make for a very tough sell to a listening ear’s first impression…

Oddly enough, exactly the same thing happened here on the opening cut in question, “Go Ahead,” as it did in the other review; instant brilliance to follow. Let’s be clear to begin with, I dig this beat overall – the piano/percussion vibe works really well, it’s just that hook that makes it tough to love at first but upon repeat I found it kind of worked for me in a way as well. I know that’s pretty ‘middle-of-the-road’ for an opinion, but that’s what I’ve got… I thought the rap-verse was right off-the-charts good, a serious contender for the speed of Busta Rhymes but with the added clarity his rhymes have always needed. With the R&B backing, it ends up coming out more like something from the chilled-out side of the Neptunes…nothing wrong with that!

The following track “Ever Since” was pretty tough to love all the way through as well, but the main problem I had is that there are absolute moments of brilliance here in the writing AND the performance; they contrast hard with the parts that are delivered at 90% rather than keeping it 100. To bring it back to the point I made in the opening, this is the song that makes you wonder what it’s like in the writing-room for this crew…how do they go about examining the spaces they do/don’t show up in? “Ever Since” largely depends on the vocals of Geno their singer, and the confident delivery OF said vocals…I’m not saying it’s entirely missing in this track, I’m saying it’s missing the consistency it needs to translate what could be powerful hooks.

And WHAT…dear readers…am I supposed to do when a track like “I Want You” starts up afterwards with a perfect beat and performance from all? The backing vocals, which I’ve struggled with accepting into my ears throughout the first two cuts ring through with confidence renewed. Let’s be REALLY real for a second though – can you get enough of the rap in Club 803? Cause I cannot dear readers – I love the sound, style and swagger of Daraja’s flow…it’s damn perfection every time he grips the mic and certainly brings out an electric performance here on “I Want You.”

“Promises Of You” features Toafiq & Mitchelle’l and comes out artistically, beautiful and inventively through the music & poetry combination. I’m not saying poetry like rap IS poetry kind of thing; I’m talking the REAL underground poetry/music combination that guys like me just sit and WAIT to come through our speakers one day. I love the guitar in this cut, I love the vocals and lyrics, the performance – it sounds like it’s most likely to be a departure from the normal on Cloud 9, but this track definitely delivers.

“So Good” brings out a slow, hypnotic grind from Club 803. There’s moments that work excellently – I love the piano & beat overall…it’s another vocal thing. R&B vocals are always one of the toughest to sell; it’s not about the ‘power’ moments – what separates the good from the great are the moments where the energy drops off but the tone remains. The quietest moments are some of the hardest to pull off in a studio…there’s no crowd to pull energy from, you have to supply it yourself and that can prove to be extremely tough sometimes. I think that Club 803 puts yet another good idea forth here; they certainly understand how to write a hook and they’re not too far off the mark as it is. A little more time spent here and there on the harmonies and vocals and this duo is bound to be a force to be reckoned with.

Doubt me? Listen to the beat of “Keep It Cool,” cause it just don’t get any cooler than that. As a singer/vocalist myself, I hear a beat like this and I can’t even believe it was left untouched and instrumental all the way through! Really? It’s the PERFECT canvas!

But truly, I do understand. Some beats are so strong they support themselves and this one truly does. “Keep It Cool” keeps the middle of this album incredibly REAL as well.

“Fantasy (Pt. 2)” will make your ears and brain jump as it tries to keep up with a highly innovative and inventive beat. Does it work? Depends on how much you like your IDM music mixed into your R&B I suppose… I think it’s an interesting enough song that’s perhaps made more interesting to me personally by the way that it’s cut-up, slashed & mixed in. But that’s for me…for others this is going to be one mountain of a struggle to accept the jagged stagger of the beat and samples. You’ll get this track or you won’t, and you’ll know which of those two you fall in line with instantly. It’s a major switch in the style of what Club 803 has put out there so far, and I give them credit for that for sure; again, it works for me personally simply based on how truly different it really is.

They get the good times rolling along again in a real party track in “4ThaLuv Part Duex” bringing in the talents and assistance of homies Lo-Ki, Golden Baby and Yung Taega. This track is an undeniable good time for all and an excellent combination of their hip-hop-meets-R&B style. It’s old-school rhyming with a verified, tried, tested & true flow but against this sweet beat you can’t help but dig the rhythm and vibe they pull off together on “4ThaLove Part Duex.”

“Remember Falling In Love” is definitely the best example of the R&B side of Club 803 working out for the best. There’s still moments, but fewer slips overall and a much more confident & strong performance on this second to last cut. Another stand-out beat; musically Club 803 has put together some incredibly solid-beats on throughout Cloud 9.

Wrapping it up rapping it up, the opening to the final track “Go Ahead” unwinds the opening tracks’ flavour and remixes it into absolute oblivion and beyond. Slowed down and grinding it out until the very end – again, this is going to be the kind of mix and sound you’re either going to dig right away or know it’s not for you. Personally, I actually dig this about as much as I did the opening, maybe even a bit more…there’s a real addicting quality of the mix in this final cut that really pulls you in to listen. Excellent low-end balancing on this cut and though it might be bizarre – it’s awesome to see a band with courage to mix themselves in this crazy of a style.

Overall, it’s been a trip! Club 803 has definitely got a lot of great ideas and the execution will only continue to develop strongly over time. As it stands, these are more than just building-blocks upon which to stand – Cloud 9 is a full demonstration of excellent ideas and exposes the limitless creativity that obviously exists within the core of Club 803.

Find out more from their Facebook page here: https://www.facebook.com/club803