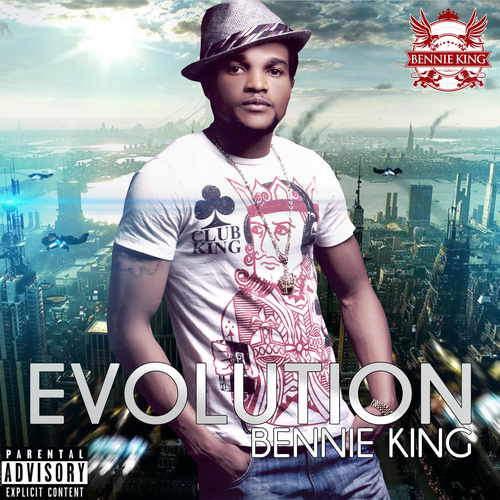 I’ve mentioned in past reviews on mix-tapes from D-Bo and Drazah Backwards that the mastery of a solid mix-tape really comes down to sample selection and the ability to string it all together. The skill it takes to put the sounds and samples together consistently so that they line up and SOUND like they were meant to be there, is an ability that will never receive enough credit. Once again – I’m here in mix-tape music land to make sure those very skills are pointed out; make no mistake – Bennie King is swinging for the fence on every track with his new mix-tape Evolution.

I also truly believe that what makes this new mix-tape from B-King work so well is that it really does take you all over a musical landscape – giving you a literal sample of some amazing sounds from all kinds of moods and tones. Vocally, Bennie is not afraid to take chances and change up his natural sound underneath layers of effects to switch it up and keep it interesting for you to listen to. And there’s no doubt – this is a guy that understands how to write a hook.

Listen to songs like “Afro Baby,” or “Beautiful” and you’ll hear exactly what I’m talking about. Bennie King is a classic example of how you don’t need to be completely pitch-perfect 100% of the time to get your hook across, or stuck in someone’s head; just ask Yeezus and he’ll confirm. “Afro Baby” was one of those rare times that I stopped an album during reviewing it and went back to immediately listen to the song again before hearing the rest. Bennie! I NEVER do that man! Something about this track just made me have to hear it again – it’s just a gigantic song! The production itself is over-blown and tweaked – almost sounding larger than the previous tracks. When you combine that style with this absolutely wicked lyrical hook that can’t be denied and the SICKEST almost afterthought of a horn solo that takes us to the end – Bennie, all I’m saying is that there is nothing but WIN on this track for me. Incredible texture on this song.

King hails from the UK but his accent is often disguised by effects, giving him a sound that doesn’t sound particularly localized to any one area. I think the work he has put into this is incredibly tangible – you can HEAR the actual Evolution within this mix-tape itself as he changes up styles and beats from track to track. The layout of the tape itself is perfect – every time he mellows out just slightly in tracks like “Roller Coaster” or “The Kidz,” he comes back in bumping with tracks like “Rock” or “Donk.” The titles might be simple – and that’s because the music speaks for itself.

The pulse and swell of a mix-tape, caused by the relationship between compression and the low end, is ever present…I’m not sure if that’s the staple of an authentic mix-tape or not but it is a common and consistent element. On tracks like “The Kidz” and “Clique” – Bennie pushes that line between clean and dirty production to the extreme. The low end rampages out on these tracks, sure to be that bass sound you hear in the car next to you at the light with the volume on max, rumbling away. And oh! What’s that? “Clique” uses a sample from Yeezus himself? Now I definitely don’t feel wrong about my earlier comparison!

As the album closes out on that final note in a collaboration of sound between B-King and Kanye, I realize there are so many tracks that I immediately want to hear again. When I heard Kanye West’s 808’s And Heartbreak years back I knew I was listening to something that was going to change something, if not only his own direction. I’ll fully admit – parts of it had jarred with me upon several listens until I fully got my mind around both his style and WHAT he was trying to achieve with that sound and album – and this mix-tape from Bennie reminds me of that day I heard it, way back when. I realized that the songs I wanted to hear right away served a higher purpose: they helped me understand the OTHER songs that I didn’t “get” right away.

The hooks of Bennie King on Evolution will grab your attention and hold it. The beats themselves will take your rump and shake it. And when you’ve finally blasted your favorite tracks from this album enough and start listening to the whole thing – you’ll realize they all fit together like pieces of a puzzle. To take a track out, or skip one, would be to disrupt a purposeful flow put together by King; one that truly expresses Evolution over an album.