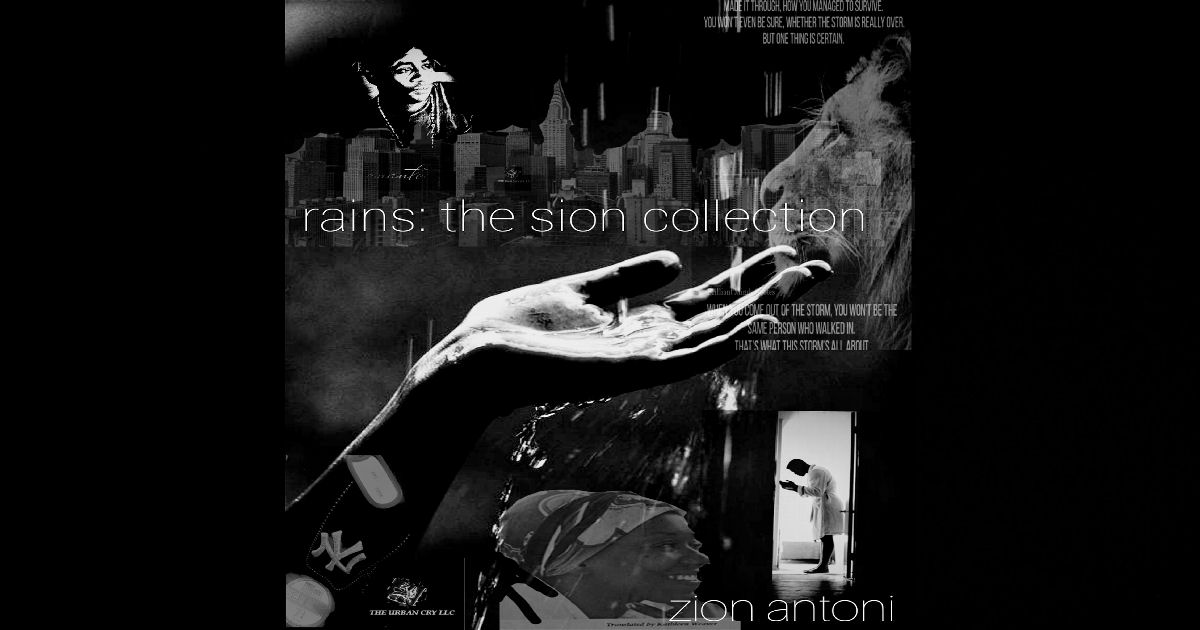 I mean…I’m gonna assume Zion’s well aware he’s rapping way over most people’s heads out there.

Call it the results of having a whole lot to say.  Zion Antoni’s working within the conscious-Hip-Hop framework…dude raps clearly & confidently with precision and his words are relentlessly on-point.  I ain’t gonna lie to ya & say this isn’t fairly heady stuff…’cause it is…there’s really no argument otherwise; if you’re looking for sing-along songs and easy to digest hooks…keep the line movin’ so the rest of us can dig into what Antoni’s layin’ down on the mic.  Because for those of you out there that dig this style of Hip-Hop and can genuinely appreciate the mix of complexity, beauty, and brilliance this emcee brings to the words he’s spittin’ – believe me, you’ll find there’s a ton goin’ on here that you’ll wanna turn up for.

I’ve got a sample set of cuts from his upcoming record Rains: The Sion Collection, which comes out officially on August 20th – all-in-all, I’ve got about five & a half-minutes worth of singles here to discuss with ya.  When you have a listen for yourself, you’ll get much of what I’m tellin’ ya when I say that, for less than six-minutes in total, you’ll discover more happening here in these songs than you will on most full-albums by other artists & bands out there…and that’s assuming they got LUCKY.  These tracks from Zion are like songs that you can eat like a meal…he’s giving your brain plenty to chew on with endless strings of syllables & words flowing from the lefts to the rights for sure…but notice the art that comes along with the craft.  You’ll hear the man’s tone & energy always end up suiting the vibes he’s working with music-wise…but even if you don’t understand every single word you’ll hear on these songs or get the full-story behind them – I’m tellin’ ya as a writer myself, hearing how these bars are constructed…I meannnnnnnnnn…for real, this is a serious literary & verbal treat for your earholes when it comes right down to it.  The man’s put the work into making these rhymes come out right – and they certainly do.

Like, c’mon now – LISTEN to the style & swagger in this man’s voice as “Tormenta” starts out will ya?  There’s honestly so much about the sound of a cut like this that pulls you in…first & foremost, you’ll find that “Tormenta” is essentially, a beat-less track!  There IS subtle percussion…but just think of pretty much every other track out there & how cranked-up the beats are…Zion drifts into the mix of the music without the requirements of a pronounced snare or really much at all to guide him – yet the sound of everything you’ll hear on this track is freakin’ exquisite & brilliantly anti-typical in just about every way.  Musically, I think this was a seriously smart choice and it made for an awesome first impression of what Antoni is capable of working with…ANY other cut out there with a heavily pronounced beat pretty much acts as a guardrail or safety net to catch emcees that can’t find the art in the game or an innovative approach that’ll stand out…and the fact that “Tormenta” has ALL this on display with such a minimalistic & chilled-out vibe to support the main star of the show?  Well homies…it’s decisions like this that make all the difference in the world to us as listeners…”Tormenta” instantly reveals that Zion’s got that spark required to inspire your mind through his words and carry the majority of the weight on his shoulders.  I ain’t gonna lie to ya – I’m just about as much in love with the music here as I am with the way this guy strings together his words when it comes right down to it…but that’s on a personal level; for the majority of y’all out there, I’d expect it’s going to be the way Zion raps with such precision & passion while keeping it real & true to his own style, rhythm, & flow, that the people are gonna remember most.  HOPEFULLY both the main aspects of this cut get the credit they deserve…I think “Tormenta” instantly reveals top-shelf talent, depth in the material, and slick results that show the uniqueness you want in your speakers.

“Dice” was probably my favorite track from the set of three, though I’ve got no issues in saying that margin between them was all pretty thin – Zion’s the very definition of Rap; rhythm and poetry – and he proves just how connected he is to the roots of the game on this second cut.  I mean look…it basically breaks down like this as far as I can tell…there are a LOT of people out there that can rap…there are even MORE that THINK they can…and there’s the rare gems out there in the scene that genuinely get what the genre is all about and flex that muscle relentlessly in pursuit out putting the art into the words.  Verbal artists like Black Thought, Talib Kweli, Gift Of Gab, Chuck D, Common…it’s these kinds of high-caliber emcees you’ll find that Zion Antoni could end up hangin’ with on playlists & stages out there with the way he strings such impressive sets of lyrical imagery and applies such a naturally smooth & sharp focus.  Dude’s a straight-up CHAMPION OF SYLLABLES, that’s what he is – listen to the sleek design of the flow on “Dice” and how well the man executes…Zion can go from gritty & raw imagery to wild nights between the sheets with flawless transitions that get him sliding words into the mic with silky swagger from point-A to point-B as you listen.  There’s arguably more of a tangible beat that comes along with the music on “Dice” – and it works well, it’s lo-fi and interesting to the ears – but to be fair, it’s damn hard to ever take your ears off the main man in charge here…Zion raps with powerful confidence and a solid grip on the m-i-c, and no matter how good any of the music might ever be surrounding him, I have no doubt that it’s always going to come down to the stylistically slick & on-point rhymes this guy creates.

As all these cuts prove, especially the final one here in review called “Ari” – it’s the man himself that’s the main hook in his material.  It’s not that pumped-up verse/chorus anthem-type Hip-Hop, it’s seriously down to earth rhymes built on solid intellectual ground and precision-perfect entertainment.  So while it might prove to be more difficult to some that need those easy-to-digest hooks that they can sing along with…the rest of us out there that dig on emcees with something real to say, we’ll be bumpin’ this loud’n’proud.  The way I see it is…Zion’s got plenty of advantages in keeping cuts like “Ari” as short as they are…like I said, it’s one big hook really, and it’s only ninety seconds long – a track like this will maintain its durability & appeal to listeners on repeat spins as a result.  That being said, it’s up to Zion where he wants to take his music and how far he wants it to branch out & extend to others outside of the conscious Rap/Hip-Hop community…as in, there’s certainly no stopping him for taking these cuts longer, having bars like these appear two times or three, and finding that hook for the mainstream listeners out there to hang onto in between’em.  And you never know…that might be the direction he’ll head next…or he might just keep his cuts straight to the point & short like he is now…but he’s got options – and options that many others out there just don’t have.  That goes far beyond the track length and speaks to the skill-level he’s rappin’ with and his lyrical abilities…basically the sky’s the limit (if that!) for Zion Antoni as far as his talent is concerned, he’s got exactly what it takes to stand-out & succeed – now it just becomes a matter of how accessible he wants to make these rhymes of his…and that’s up to him & him alone as an artist to reconcile & consider.  But no doubt that I’m digging what I’m hearing – on “Ari,” and on every other cut I’ve heard from this dude so far; Zion’s got an authentic approach that suits him strongly, his confidence and tone of voice on the mic is impeccable, and his words continually connect either stylistically, or in the form of a lyrical knowledge bomb droppin’ substantial content up on ya.  Dude’s got mad skills and ideas that show he’s thinkin’ on the next-level – and the professional way he lays it all down so impressively within such a short timeframe proves just how ready he is for it.

Find out more about Zion Antoni at his official page at Facebook here:  https://www.facebook.com/urbancry1978