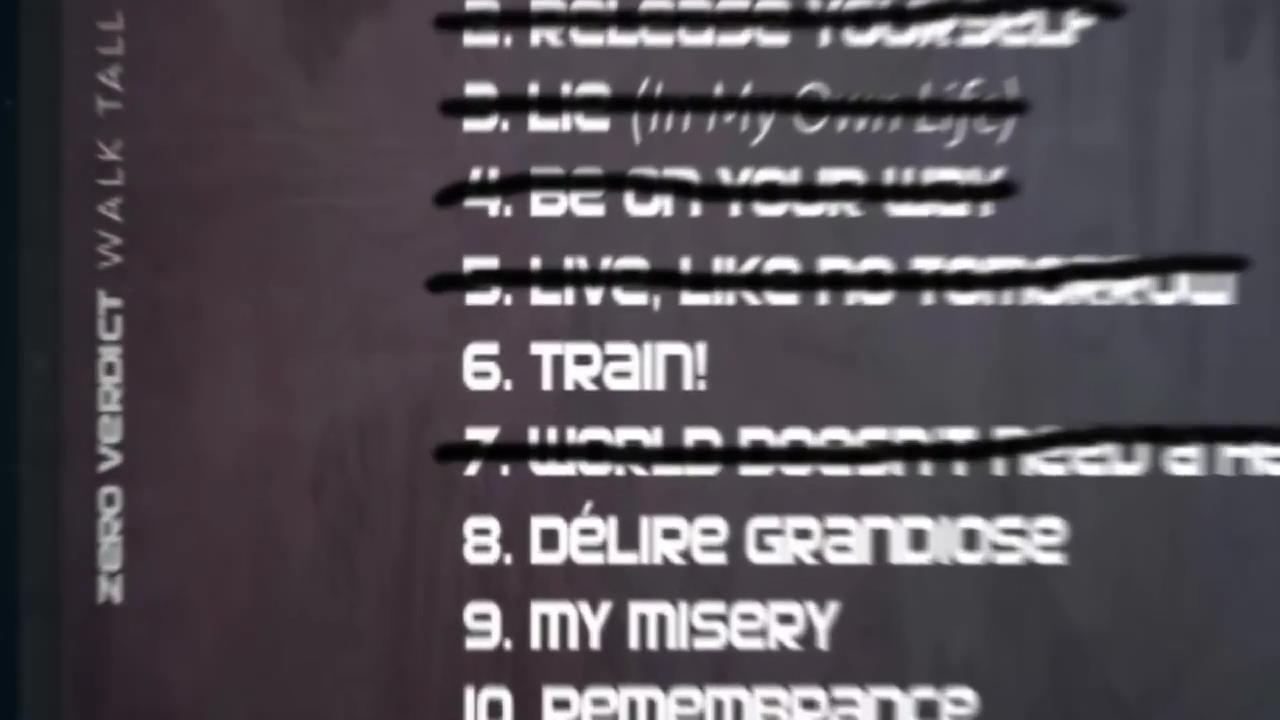 Gotta say…I’m impressed with this full-frontal new rock assault from Zero Verdict! We’re familiar with the music of this four-piece band from Oulu, Finland as we’ve reviewed their previous EP Clarity nearly a year ago now and it looks like we’ve got our hands & ears on the brand-new single called “Train” from their upcoming album Walk Tall being released soon this year. This band hit hard in the past the last time we had them on our pages and I’m quite pleased to announce that Zero Verdict seems to be hitting harder than ever on this catchy, riff-filled new song.

To say the hook isn’t addictive would be a flat-out lie. I put this song on ONCE and I was already singing the chorus chant of “It’s coming right this way!” around the house. Repeat listens have wormed this excellent song into my brain and rooted it in there deep, never to leave. I’m cool with that…it’s one of those nice problems to have.

But if you like CRUNCH in your guitar riffs…Tapia Mattila has got your best interests in mind as “Train” is truly exceptional for the guitar work that leads the way storming through this powerful rock song. Much credit to the flawless bass of Juha Haipus and hard-hitting drumbeats from Pekka Leppäluoto – the rhythm section of this band allows Mattila to drive this song without worry, completely confident in all its overdriven glory. Absolutely deadly switch in the music just before the three minute mark that transforms this song in tremendously dynamic and theatrical ways – like a blending of bands like King’s X, Jellyfish, Queen and good ol’ Extreme.

Now in saying that…yes…I’m well aware of how ten-twenty years ago all of those bands were, at least for the most part…but for some truly odd reason, this new song from Zero Verdict was like a real breath of fresh air through their perspective and take on the genre & style. You can call me absolutely crazy…but maybe it’s time for BIG BIG rock to make its comeback…my ears seemed extremely ready to take a ride on the heavy rhythm & groove of “Train.” I think it has a ton to do with the absolutely wicked vocals coming from Sami Huotari and how convincing of a performance that he’s put into the microphones on this explosive new single. This guy fully gets me amped up with this chorus…and way before we even GET to this part of the song, the way Sami climbs aboard “Train” to begin with is nothing short of extremely impressive and fucking rock-awesomeness. Might make for a fantastic single for sure…but I can’t imagine being a singer expected to hit that incredible opening note if they were to play this song first of the night on stage; that’s the kind of tone & control that takes a serious amount of warm-up! Whatever Huotari has done – he’s done it right; this is as rock as rock can possibly get.

I will say this – even the best lyric video in the world would be nothing to me without an awesome song to drive it forward…and usually I feel like we only get one out of the two whenever I watch anyone’s lyric video. Whomever made this lyric video for Zero Verdict makes me want to fold up my tent and take my hat out of the lyric-video ring permanently…it is simply AMAZING and an absolutely triumph in lyrical display. Not even remotely kidding, it’s one of the best I’ve ever seen for how the words appear on screen…inventive and painstakingly edited…anyone that’s ever edited a video can appreciate how much work went into this. What impresses me most are how the backgrounds themselves are actually completely minimal but the words come up in such an entertaining and captivating way that anything else going on would have taken away from the incredible impact the words were making. I’ve gotta say…this is one video-editor I’d be mighty pleased to shake the hand of as this is truly impressive work and the precision & editing are completely without flaws and designed to captivate & compliment the song perfectly.

Check out the video up above for “Train,” the first single from the upcoming album Walk Tall if you haven’t already to see & hear what I’m talking about! And make sure to check out the official pages of Zero Verdict so you’ll be the first to know when the new music comes out this year.