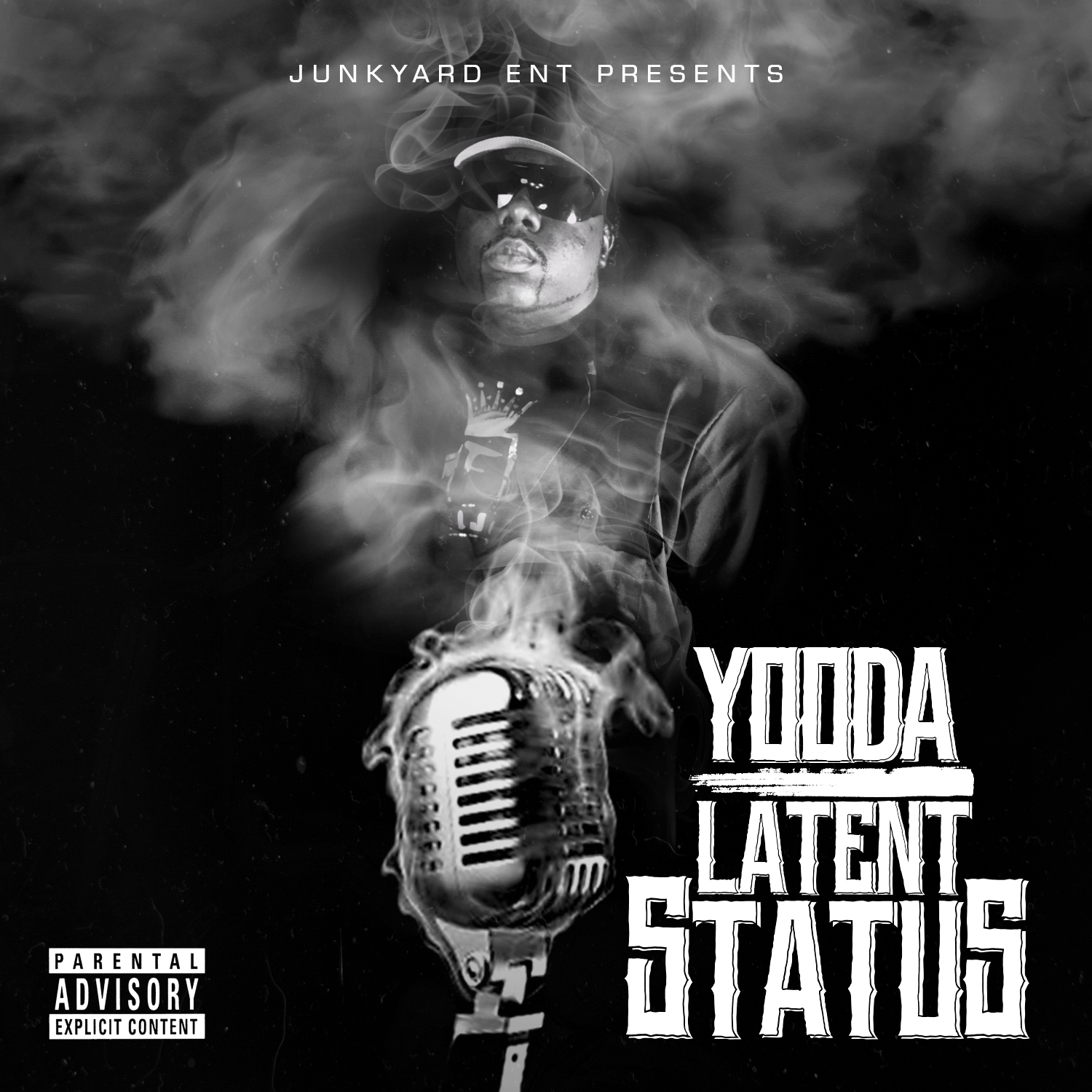 One might think that the last thing someone would want would be a crusty old white dude like me that looks like a garden gnome 10/12th’s of the year to understand everything about where they’re coming from in their music. Heartbreak…sure, I can relate. The struggle to become known…definitely. Bitches, money, guns…maybe not so much! And so it would seem that rapper Yooda and I certainly come from different worlds…but from the picture he paints, I think I’m comfortable right here on my couch thank you very much. And while I might not get the whole picture, I certainly get how real it all is from Yooda’s perspective in life.

What I was digging on the first cut “I Don’t Talk” from Yooda, was that for a moment, it seemed like we might not be too far apart after all! For a moment, as Yooda listed through a number of topics he doesn’t rap about…some of those seemed close enough for me to believe I wouldn’t be in for another rap album rhyming about the thug life. “I Don’t Talk” is a strange track to lead off Latent Status with in the sense that lyrically, it kind of leads us all to believe that there might be other topics in the mix…but in truth, much of what seemed to be on the list of things Yooda won’t rap about in “I Don’t Talk” seem to be prevalent topics in the songs to follow. Not saying it’s a bad track – it’s not at all. Yooda has a knack for creating BIG hooks and that makes itself known right away…just a little confusing in feeling like this was all going to head in a massively different direction than Latent Status does.

And so what anyhow…assumptions & expectations are always on the person that has them and no one else! The gang-style vocals of “What U Mad 4” create a menacing atmosphere and break way for Yooda to display a masterful grip on the microphone and a flawlessly metered vocal-flow. It would always depend on what side of the Nikes you’re on of course…this might be a party vibe of sorts but it almost sounds like the perfect soundtrack for beefs to be settled out on the court.

Latent Status has a serious edge to it and the beat & lyrical delivery really push themselves right up on you…these tracks are produced as massive, epic structures…lots of work put into the technical aspects of the music with lots of effects and subtle aspects driving the music forward. “Pop 1 Mo” is a great example of Yooda’s ability to take a good time vibe and still put some thug-seriousness into it…guest stars B.O & Spaceman pick up the weight and carry this track from the middle to the final blaze through the chorus. It does offer a fun atmosphere…but again, there’s that hard-edge to the vocals and energy in the lyrics that almost makes it feel like you can’t enjoy this music without taking a slap or a punch somewhere down the line…

A smooth sample begins “Nigga 2 Nigga 2.0” and features homie KayJay assisting on this…this uhh…love song? I mean it might not quite be all about love…well…lots of it isn’t really…but the hook in the chorus is great. Compared to the dynamics of the opening three tunes this one does come out a little softer as intended…but also a little less pored-over production-wise when hearing it against those opening cuts. I think that, well…especially when you hear the huge anthem and production that’s put up on Yooda’s “Oh Yeah,” it just seems like “Nigga 2 Nigga 2.0” might be the track to benefit from a slightly better mix or maybe a different placement on the album would make it stand out more than it does right now.

And hey! Would you look at that? A homeboy we’ve run into in the past, rapper Ced Wynez lends his microphone talents on “Puppet Master” – we’ve known about him for a while and the caliber of which he can deliver. Ced Wynez doesn’t let us down whatsoever, delivers a slick verse or two, and matches energy with Yooda to make for one of the most successful collaborations on this new record.

“She Twerkin” has that massively dangerous and menacing tone to it once again. I really do dig the dark, dank, back-alley vibe to the music as well as the convincing way that these words feel like they’re pushing you up against your high-school locker demanding your lunch money. I miss that feeling. Switching up the tone to something a little lighter, “Amazing” brings back KayJay for a sensual rap that mixes old-school with new-school in an excellent combination. Yooda’s done a good job of mixing up the style & sound of the rhythms and rhymes to allow this album to keep you interested with a large all-encompassing palette of rap creativity.

“I Go Hard” makes me think of that moment in Office Space where they take the photocopier out and beat it with baseball bats, presumably making it electronically wish it was never even built. “I Go Hard” continues to represent Yooda and his sound in full and the posse that breaks out on “10 Broke Niggaz” really brings this album back to full-life just in case any ears were thinking about wandering off. “10 Broke Niggaz” lets these MC’s trade off the mic expertly and the chorus anthem is MASSIVE. Big mean sounds on this album…it put hooks in your ears and a boot firmly on your throat.

Keeping that interest is the gigantic beat that fuels “Pour It Up,” which leaves Yooda out there on his own to do what he does best and he delivers perfectly once again, gripping the microphone with confidence, clarity and professional precision. Definitely a passion for rapping on full display from Yooda – you can tell that he’s loving making these rhymes come to life. Sometimes that can get in the way slightly…sometimes we all get excited over collaborations and new music that quality control can dip even when we think we’re on our guard & we’ve nailed it; case in point, “Where My Dawgs At.” I’m not only completely unsure about the strength of this hook – I think it’s also delivered at half-mast, especially considering the quality in vocals hasn’t dropped for a moment on the rest of the record. The verse in “Where My Dawgs At” works without issues, but that is one problematic chorus that needs to be examined under the microscope in the studio all over again.

“Duckin Bids” definitely hits harder and meaner than most of the tracks before, which is really saying something at this point! I think this track is perfectly matched from beat to lyrics to the inspired performances in the verse and chorus; “Duckin Bids” takes large swings and lands big lyrical punches in clever combinations one after the other. Love the verse that starts around the three-minute mark on this clever cut…the madness and genius of this verse carries this track out to complete excellence – great atmosphere, convincingly performed.

Yooda does well on his own or when surrounded by the talent that’s helped out on this album. “House Party” starts building the party up all over again – I had to check the track-listing, I thought I might be in for a double-album here! Really dig the music in this dirty club-beat…”House Party” sounds more like fun than any other track has on Yooda’s album…great sample incorporation and a lot of the overall menace is left behind for a good time.

Personally, I might have reversed these two tracks at the end, just to end the album on the high-note of “House Party” and the awesome energy it has. I don’t think “Take U” is a bad song either – everything Yooda’s put together passes as acceptable or way-greater but I don’t think “Take U” was the ending the album deserved in terms of impact. I get the idea of mellowing it out a bit at the end, but I don’t know…again, I think “House Party” would have been a choice that would have left more impact on our ears…that could just be me…who knows…

As it stands, Latent Status is a solid effort from a passionate MC that clearly makes music that matters to him; Yooda pumps out conviction over the microphone and rhymes over dynamic beats that pound with real mood and atmosphere that makes some of this music altogether TOO real!

Find out more about Yooda from his official Facebook page at: https://www.facebook.com/Mr305Shotta