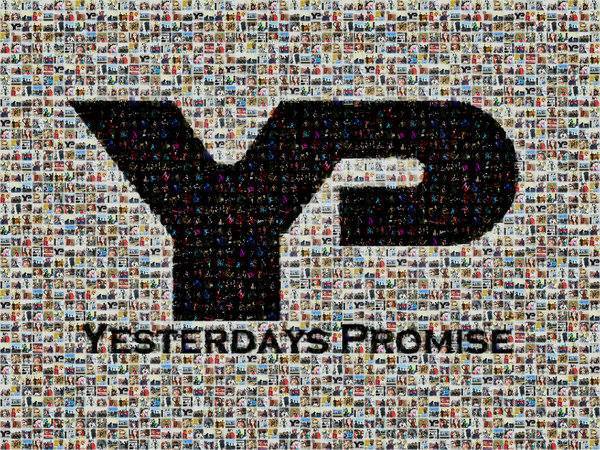 Chances are…there will be a LOT of things that stand out to you when listening to Yesterdays Promise; if this ISN’T the case for you…double-check your ears as I believe you’ve left several Q-Tips lodged in there. Admittedly, we all like what we like and love what we love when it comes to music – and that first listen can tell you a ton, but often mislead you even when it comes to your favorite bands and sounds. Within seconds of pushing play on this new EP from Yesterdays Promise, I knew two things instantly; one being that, it’s a little outside of my genres currently, but certainly within my past and scope…

…and the second thing I couldn’t help but notice upon first impressions…is that there is a freakin BEAST back there on the drum kit of this band. As the EP plays through, each player certainly claims their own justified moments in the spotlight, but in complete truth as to why I’m singling him out at the beginning here…is simply because it really has been a long time since I’ve heard such an impact on the kit ring so true through a first listen.

You know I’m going to look it up; and as it turns out – the drumming is shared between Jeremy Salo (Drums, Guitar) and Steven Douglas Young (Vocals, Guitar, Drums). As the EP opens with “Still Burning,” Yesterdays Promise explodes early, largely in part to the drumming and the screaming melodies of S.D. Young. But here’s the thing – like I mentioned, it’s a little outside of what I’ve been listening to lately – but I’m not so far gone that I can’t tell the real thing when I hear it – and this is just that. Yesterdays Promise is as real as it gets.

“No Way To Know” is a certified volume-twister. Anything less than the max your stereo can handle is likely just not doing this song the justice it so deserves. You’ll hear excellent guitars with furiously-intense-riffage happening all over as lead guitar player Wes Richards and Kyle Friend (Guitar, Backin Vocals) take this band for one completely wild ride. Nearly an echo or an update on the beginnings of Hoobastank back before they gained popularity and started to suck it out – this aggressive track harkens back to their energetic, exciting early work. Truly – this song pumps iron all on its own while you stand there and spot it.

While each song has a hook that would bring anyone outside of the alternative-rock genre right to the inside; “Time Will Tell” is the crossover you’ve been searching for. This is a perfect example of refusing to let a particular style or feel own your music forever; after completely rocking the house down with “No Way To Know,” you’ll find beautiful melodies taking over the tracks to follow. “Time Will Tell” really displays the band at full strength. Bass player Austin Terrill takes his moment in this song and really holds this track together as each player finds their own magical way into this full-blown beauty of a track. The harmonies, the songwriting, the actual performance – this track has it all.

Taking it to an acoustic-level, “Tomorrow’s Gone” is another melodic and gorgeous track. After starting this entire journey out in such an explosive fashion – the complete switch that begins halfway through the YP EP really shows the ability of Yesterdays Promise to adapt to all the sounds they create and make the absolute most out of each and every one. The result…well…personally I don’t think it could end up better from this reviewer’s perspective…I literally can’t decide between what I like the most; Yesterdays Promise at their most intense, or at their most minimal. The perfection in these songs is immaculate – each song possesses some really smart pop-infused hooks that are completely memorable no matter which track you choose.

Do I have any BEEF here with Yesterdays Promise and this excellent new EP? Not REALLY. There’s a cover of “Everybody Wants To Rule The World,” on here…and I don’t know… I’m not mad about it…how about that? I mean that in the sense that I’m not listening to this cover and thinking ‘why did they even bother’ as I do with many…they’ve done a good job on making this their own, speeding it up just slightly and adding their own signature melodies in. But this is a BIG BIG song…and it’s going to be a tough one to convince people with, in comparison to their original work on this EP. In truth…this sounds to me more like a band trying to figure out the way into the scene by putting their spin on a massive anthem – but the absolute truth of it all here is that this is one band that needs no gimmicks with this much raw power coming out of their amplifiers. Each song they’ve written originally is an absolute stunning knockout masterpiece.

Other than that, which is going to be debatable for most ANYWAY…the only occasional issue in some truly flawless production is where to fit in the low-end synth-drum…it’s one of the most addicting sounds out there – believe me I love it too. With its tone and sound having little elsewhere to go other than to dominate the sound of whatever else is going on, it’s just about the toughest thing to mix out there. And for 99% of this entire EP, you wouldn’t find me complaining a single bit…there’s only a couple that come through with a little more of a boom – and who could possibly fault this band for getting overly amped on the energy-infused first half of the EP? If I made music this spot-on, I think all you’d hear from me is one giant booming drum at the end of the mix cause I’d be through the ROOF excited…so I think we’re lucky that Yesterdays Promise was able to reign themselves in for us at all!

As it ends on the subtly-beautiful “New Life,” they recall some of the lighter-side sounds of bands like All-American Rejects, or even The Decemberists. It’s an excellent way to end the EP and overall, there’s just literally SO MUCH here on only six tracks that you won’t hesitate to instantly listen a second, third and fourth time. It’s a perfect mix of sound and creative diversity made by a band that sounds completely unified in every direction they take and each avenue they head down. The conviction, hunger and commitment are all astoundingly prevalent on this EP – this band will take off in the years to follow…mark my words people….