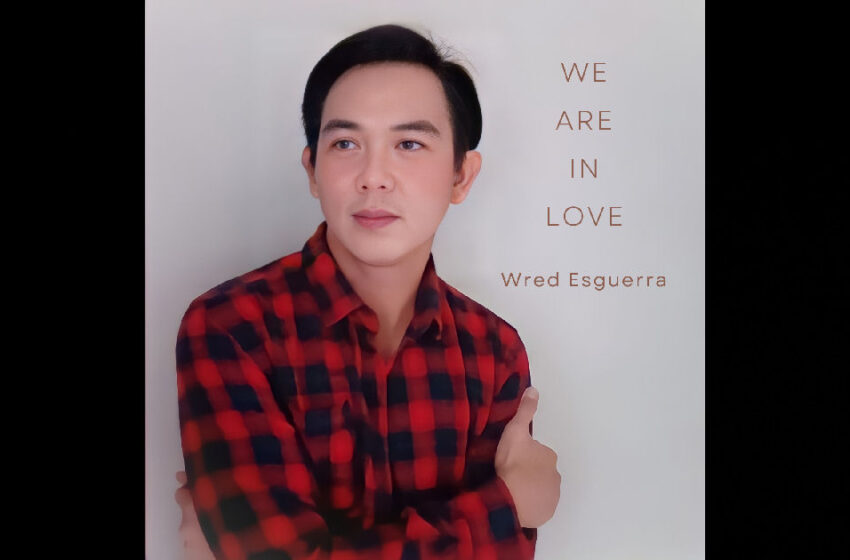 Wred Esguerra – “We Are In Love” – Single Review

Well would you look at that?  Wred’s new single “We Are In Love” comes out on my wife’s birthday this year!

I don’t know what the rest of you out there got her, but it’s gonna be tough to outdo that as a present.

Alright…probably fair to say that Esguerra didn’t write OR have the release of this new song planned for her, and that this date of June 10th is very much complete coincidence – but on a personal note, that’s pretty freakin’ cool considering I do still love the heck out of the lady each and every day.  Nothing wrong with a good ol’ love song when it comes right down to it, and I’ve enjoyed listening to the evolution occurring in the music of Wred Esguerra over the past year as he emerges into this music scene we share.  Chances are at least a few of you out there reading will remember the name…we helped introduce ya to him here on our pages through a review of his debut single “You’re Still Here” and follow-up cut called “Come And Go” towards the end of last year.  According to the numbers I can see online, it sure seems like more than a few of you have been listening – both of those tunes pulled in impressive results, and now it’s time for Wred to start cracking into his second year as a professional artist with his brand-new single coming out.

I like what I hear Wred!  If you have read the past reviews I’ve written on his music, you know I had a few spots of advice on his debut track like I generally have for any artist or band at the very start of their career – but more surprisingly, I really didn’t have much in terms of a critique for him on the second track “Come And Go” – that’s how quickly Wred was developing his skillset & evolving as an artist.  I might have the odd tidbit of this or that to consider from here on in…but generally speaking, from having a good listen to “We Are In Love,” it’s clear he’s got a great grip on what he wants to get out of himself as a performer & outta his music as an artist.  He uses effective lyrical imagery and works in the right amount of emotion whether he’s reflecting on the happier side of love, or musing on how much he’s missing it.  The beat in the song, while gentle in its demeanor, is super strong, and sets him up really well to get across some big moments & really clever hooks – Wred’s got a single-worthy cut here again.

Ultimately, he sounds inspired – and I’d wager a guess that the reason that is, is because the love he’s singing about is fresh & new – you all know what that feels like, and how every single flower seems brighter, the days are sunnier, everyone’s in a great mood all the time, there are no problems in the world…the optimistic phase – and if you’re both lucky & careful enough to preserve that feeling, it’ll never go away.  “We Are In Love” sounds like a romance that’s taking flight with all the butterflies that are flyin’ around in the stomach and all that good stuff that we love to experience as human beings here on this planet of ours – more importantly in terms of the song, Wred sings it all like he means it and that confidence in himself, his music, his life, his ability to love – it all comes across as boldly as it is beautiful.

What would I advise the guy on this time around?  Would I have advice for him about anything at all?  I generally always have something to say, otherwise I wouldn’t be doing what I do in writing these reviews…but at this point already, this early on into his career, it’s really not much more than personal opinions.  Tone-wise, energy-wise, consistency-wise – I felt like all that checks out strong for Wred on his third single – he’s put in another performance to be proud of on “We Are In Love” and the feelings that he’s feeling, translate perfectly to us as listeners as he sings it…you really can’t ask for more out of any artist other than that.  The rest is all about tweaking this thing or that thing to see what else there might be within a song, and mine the heck out of a composition to see what objectively works the best for ya.

In terms of that…there’s a couple things I’d consider in the future if I was Wred, but nothing I’d really think of changing in the way that “We Are In Love” came out now, make sense?  Like…I hear moments around the 1:20 spot and think to myself – “THAT is where the guy is really locked right in to the feelings and emotions that come along with the song, and using the music to his advantage perfectly” – that moment in itself, as low-key as it may appear, is a magnificent hook.  As he slides back into the verse at that point in the song, I’ll admit – I felt like he might have a more addictive hook to be found there than he might even in the main chorus…and sometimes, that can be a really great thing.  His biggest note and moment around the 2:25 mark…which impressively lasts for about a full ten seconds, would not only require a full two lungs worth of breath – but he should again, be proud of how that came out – that’s the sound of an artist rising to the challenge and being the best version of themselves when called upon.  All that stuff works out really well – and it’s right after that point, where you’ll find the most memorable hooks of “We Are In Love” are revealed when the backing vocals kick into gear – that’s what takes this whole song to the next-level I felt like Wred was searching for.  While it does make for a solid progression in the song and a great finale…objectively speaking, it’s hard to say whether or not we get quite enough time with those main hooks we find – or if we just want more of them due to how special that specific moment sounds – but sure, he might want to look at that in the future and decide whether or not to move things up a little bit in the structure in that sense.  It’s really just about knowing where those most major hooks really do exist, and then walking that fine line between where we get enough of them in the song without them being exploited too much – make sense?  As it stands now…it’s probably right on the edge…it’ll be enough for some, and for others, that’s what the repeat button is for anyhow – the real bottom line is that Wred’s got plenty to offer your ears in a track like this, and a song that clearly comes genuinely from the heart.  As long as he’s using that as his north star to be his compass & guide him forward, he’ll keep connecting with his audience & continue to move the hearts & minds of his listeners.

Find out more about Wred Esguerra from his official page at Instagram:  https://www.instagram.com/wredesguerra

Tags: Singles sleepingbagstudios We Are In Love Wred Esguerra