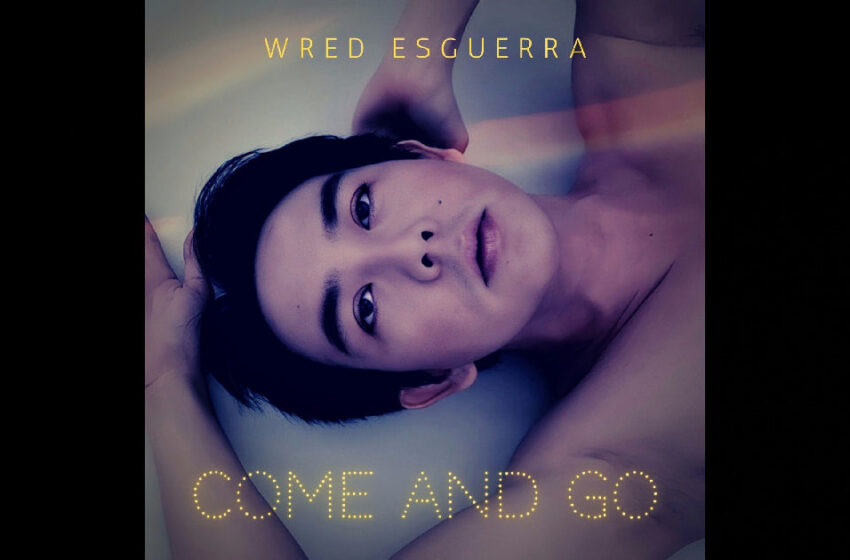 Alrighty!  Wred Esguerra…I tell ya, I love the sound of that dude’s name – it just sounds cool doesn’t it?

Maybe you gotta be a guy that types words all day like I do to appreciate that lol…I don’t know.  It’s just not a name I’m likely to forget any time soon, you feel me?  There’s so much advantage in that when it comes right down to it – I’m not gonna be the only one that he makes an impression on in that regard; to be able to know that when people hear your music, they’ll remember the name too, is invaluable.

Now…of course, I remember the name AND the music too – it wasn’t all that long ago that I reviewed Wred’s debut single “You’re Still Here” at our pages…it was just ten days back actually, here in August.  It’s fair to say that none of us really know what we’ve got on our hands & on our playlists just yet – it’s impossible to get the full scope of what an artist can do or what they’re all about within a singular song or snapshot view of an artist or band…that’s what those careers are for.  That longevity stuff, you dig?  Over time & experience listening, we get a much better idea of what someone is capable of in the music world – and already, I personally like the differences between Wred’s first single & this new one called “Come And Go.”  I’d even go as far as to say that many, if not all, of the potential improvements I felt like he could have made to “You’re Still Here,” weren’t even a factor at all in listening to “Come And Go” – Wred Esguerra’s on really solid ground with this second single, with a song built stronger all-around.

So.  What did I end up citing as the main spots Wred could evolve in that first experience I had with “You’re Still Here?”  Well first of all – you can read the review by clicking right here if ya like – you can read all about my thoughts right there – but in a nutshell, there were two things I felt like he could instantly change and achieve better results, which included the focus on his tone from start to finish, and the length of the song itself…pairing it down so that he didn’t give it all away in one shot to have us coming back more – that kinda stuff.  Both relatively easy things to adjust when it comes to the talent that Wred has – I don’t know for a fact that’s what he did in preparing this next single, if he still had any time to adjust things prior to releasing it this coming August 27th – I just know that it sure sounds like it.  None of those prior potential issues exist on “Come And Go” – Wred’s tone is spot-on, and at about a full minute-plus less in length, coming in at a cool 3:49…I mean…he’s nailed all the right things here.  I didn’t ever get bored of listening to “Come And Go” and never felt that wear & tear on any of the parts of the song…each time the hooks in the chorus came back, or even the verses for that matter – everything was welcome for that next time I got to hear it all again.  Essentially…if this is the level of which Wred is going to evolve, expand, and grow in between each single he puts out, the sky ain’t even the limit for what he could achieve…he’s learning at an incredible rate & he’s clearly inspired right now.

And if I’m really being honest with the guy, there’s not a whole lot I can advise him on when it comes to this new single – I don’t think I’m hearing anything at all that I’d change – I think he’s got this locked down real tight.  Realistically, I know how the masses tend to listen to their tunes – I can hear that “Come And Go” is a deeper cut with a more serious vibe on display in the music…and ultimately, I’d probably still tell ya that in terms of outright accessibility…”You’re Still Here” likely has the more memorable hook of the two singles Wred’s released so far.  BUT…I think this second cut still has an extremely strong hook, stays impeccably focused from beginning to end, and it’s gonna hold up longer over time.  Whereas what I was explaining to Wred beforehand in the last review in how we might nearly overdose on the main hooks he had – this time around, he’s given us a perfectly written song that’s gonna keep us coming back for the unbreakable quality you can hear from the production, to Wred’s performance.  Dude’s singing spectacularly well here…his biggest notes all hit home, and the push/pull emotions you’d wanna find in his vocal tone, energy, and sincerity are all in the right place – “Come And Go” more or less takes on the tale of one-sided love, where one-half of a relationship seems to care that much more than the other does, if the other side even cares at all, you feel me?  Chances are you don’t JUST feel me – or what Wred’s singing about for that matter – chances are, you might very well relate to this song much more than you’d think.  “Come And Go” details the power of infatuation and the hold it takes on us…our vulnerabilities and how they get exposed when we’re looking for love and willing to put our hearts on the line…the heartbreaking emptiness that can come with loving someone that never seems to love us back in the way we need them to…Wred pens a really solid tune and he’s proven that on both singles I’ve heard from the man so far.  I’m more partial to “Come And Go” without question – the lyricism is great on both tracks he’s put out, but in my opinion, there’s almost no argument to be made otherwise – “Come And Go” is just that much more of a stronger & refined single.

And what did I tell ya Wred?  What have I been telling all of ya for years now?  It’s the tiniest changes that can lead to the biggest differences and generate our best results.  If you read my last review on Wred’s music, you know I had all the confidence in this guy getting to where he needs to go, and that he already had all the talent he needed to get there…it was simply about applying a bit more focus, adjusting a few dials here & there, watching that length & keeping an eye on that reason for us to return – and he’s already proving on this second single that attention to detail really does make the difference.  Structurally & songwriting-wise, I felt like “Come And Go” showed leaps & bounds in Esguerra’s evolution as an artist already…remarkable really, considering how short of a time it’s been in between his debut single and this new song here today – and his performance never wavers, allowing him to really keep us engaged and believing in the emotions, thoughts, and feelings he puts into his vocals.  All in all…if this is the rapid rate of which Wred Esguerra is evolving as an artist…I think it’s fair to say we can expect he’s going to continue to surge forward throughout the scene with his soulful sound, and that each time he shows up with something new, he’s quite likely to keep leveling-up over these next years to follow.  He seems incredibly excited to learn & grow as an artist, and he’s proving early on in his career that he’ll put in the work to make that happen – you KNOW we’ve got love for that here, always.

You can pre-save “Come And Go” by Wred Esguerra now before its official release on August 27th by following this link right here:  https://distrokid.com/hyperfollow/wredesguerra/come-and-go