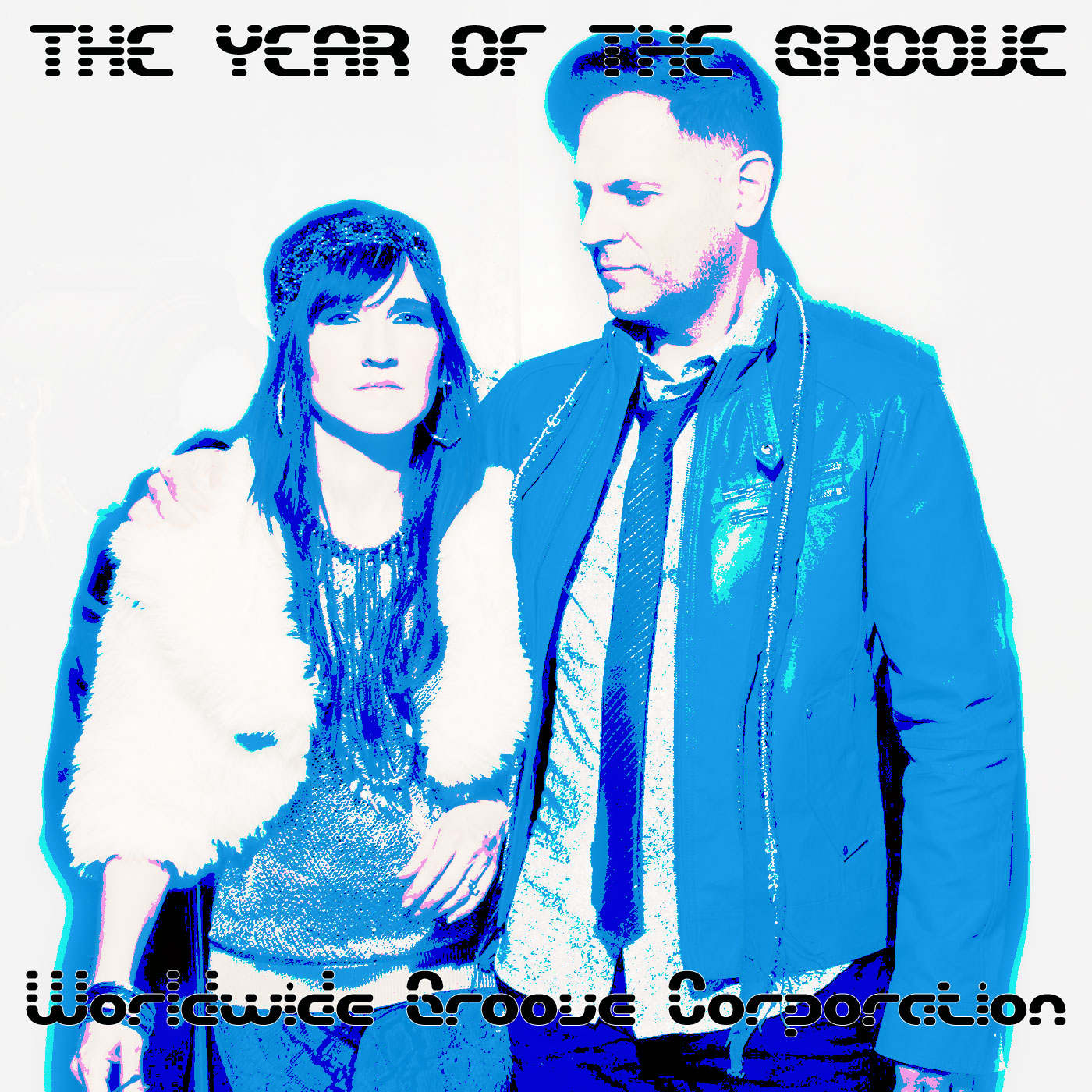 I’m certainly referring to more than simply the opening line from both the iconic 90’s alt/ska band Sublime’s hit “Summertime” which also opens this new experience into the Worldwide Groove Corporation; no…I’m referring more to the entire journey into their music – and any comparisons to anything ska-related also end here in this opening paragraph. What we do have on our hands here is a unique project presented through the minds of two electro-wizards, Kurt Goebel and Ellen Tift representing their genre from the heart of music-ville in Nashville, TN. As I’ve mentioned many times, Nashville is literally the haven for song-writers in general; not just country-music as is so popularly believed.

Proving that through innovative electro-infused music, is the Worldwide Groove Corporation as they launch through a musical-campaign of singles they’re calling the ‘Year Of The Groove.’ Ok…so…first of all – sign me UP! There are trace-elements of some of my absolute favourite electro-influenced bands like Massive Attack, Hooverphonic, Peace Orchestra, Garbage, The Cardigans to name a few; but the resulting combination in sounds are unique to themselves and sparklingly-fantastic to listen to. Songs like these are literally the reasons I get out of bed in the morning and rush into the studio to press play and see what comes out of the speakers. I wish I could say it was ALWAYS this entertaining!

So…the idea behind the ‘Year Of The Groove’ is for the Worldwide Groove Corporation to release a single per month throughout their year-long celebration. Like any truly fantastic group or artist – they’ve put forth an idea in effort to approach music from a different angle; but the real magic lies in no real limitations of any kind. Worldwide Groove Corporation knows this clearly; their year started in July 2014 and you can already find 15 tracks on their Bandcamp site…so unless they’re using a different calendar than I am…

NOT complaining whatsoever! I don’t care if the reason is as simple as their math is terrible – there is MORE music than I was expecting to find and all of these sounds I’ve found throughout this ‘Year Of The Groove’ have served me well already by turning what could be another ordinary morning into the extraordinary.

July had produced two singles in the debut of the Worldwide Groove Corporation. Put this playlist on RANDOM and just SEE if your ears are good enough to pick out the ‘early-days’ without actually looking; you can’t do it. If you CAN do it – then we need to switch places because my ears just aren’t that good or the Worldwide Groove Corporation just IS that good. Pretty sure I know just which of those two cases it really is. The point, quite simply, is that this plays out from beginning to end over a large time period and though the style & groove change subtly throughout – the quality itself never dips for even a second. The song-writing, the execution, the production, the performances…it all stays perfectly combined for an absolutely smooth electro-ride through the ‘Year Of The Groove.’ Opening cuts “Summertime” and “Come To Me,” start the year off on the right notes offering a jazzy-electro vibe to start into the experience with two powerful singles featuring dynamic, slow-burning-electro beats and flawless vocalizations from Ellen Tift.

The slow-progression in the writing, in my opinion, DOES go up over time, but the idea that you’d ever feel the first tunes wouldn’t make the cut overall would be completely crazy. As they slowly build through exotically flavoured tunes like “Kiss Me Slow” and the massive-intensity and atmosphere of “The Legend Of The Fall;” it would be extremely hard to argue that this incredible duo of musical minds aren’t already in full-swing by the month of September with this incredible song.

And then comes a wicked switch in the energy that works for these two extremely well. “Supermodel Astronaut,” might reveal a little more of the Nashville song-writing influence on them than other tracks will on this collection; but there’s no denying that’s a huge hit in the making right there. The beat and tempo rise to a whole new level as the Worldwide Groove Corporation begin to explore a new dimension of their own sound to tremendous results. October overall, with two singles, was just a fantastically inspired month for these two it seems; “Freak The Beat” is theatrical, vibrant and full of life. An absolutely committed performance from Tift as she just SLAYS this song along with Goebel and featuring a musical cohort in the form of Skye Reedy – and this is a combination that works extremely well. Very much reminds me of Canada’s own Esthero quite a bit in these October selections.

“Flow.” Man. I love this song. I really do. With the SIMPLEST lyrics known to mankind – Worldwide Groove Corporation shows you that being versatile and dynamic within your own creations can make even the most basic idea expand into something incredible. Very much like a Peach Orchestra or Thievery Corporation style groove – these vocal lines fit perfectly to the music; they’ve done an extraordinary job on this tune, I could listen to it all day long. “This is what it’s like to flow,” echo the vocals as they saunter into my waiting eardrums…and I couldn’t agree more.

Carrying that Thievery Corporation-like atmosphere into the following instrumental “Daydream,” they again put forth another aspect of what these two can achieve and provide another maximum result. The wild-blend of smooth sounds throughout “Daydream” are a pleasure to listen to in texture & assembly. It’s an excellent track, though perhaps outshone just slightly by the innovation and creativity of the track to follow “Mr. Exotica.” This track is as RICH and FULL-BODIED as your morning cup of coffee. If it’s NOT – you need to switch brands. Coffee, not music.

And can I just say…I love the opening of “When The Holiday Brings You Home.” This IS the December track. PART of me wants to tell these two to never conform to anything so intensely obvious as to create a holiday-tune in the month of December; another part of me realizes you can’t rightly release a song like this in July all that often and make it make SENSE. But perhaps my favourite part of me…the part that analyzes the least and just lets the music come in freely…that part of me absolutely LOVES everything about this song. Worldwide Groove Corporation – excuse me kind people, but do you realize that I haven’t enjoyed a ‘holiday’ or ‘xmas’ song since I was about EIGHT?

You have broken the streak. Whether remixed through the sweet-tones of the excellent piano/vocal version, or the official version – “When The Holiday Brings You Home” is loaded with fantastic melody, a marvellous and heart-warming performance from Tift all combined into a song I would actually be proud to emit from my speakers. So far, my playlist for next xmas-day actually contains a song for the first time in years; this is the one. My Grinch-style heart for holiday-tunes just grew two full sizes I swear.

Just in time for my birthday they released a fantastic track called “Glitter & Bliss.” You gotta love these two; that was incredibly sweet of them to think of me like that and make me more fantastic music to help me celebrate; great people in that Worldwide Groove Corporation I tells ya….

Alright – so it probably, more-than-likely was not in fact made for me…it was made for all of us to share; I’m cool with that. Bottom line is that this is another outstanding electro-groove with their signature and proven ability to stuff a song with about twenty addicting hooks and reasons to listen to it all jammed in there. Excellent lyrics to this track…I’ve enjoyed what they’ve written to this point in their year – but this particular cut is exceptionally good when it comes to the words. Performed with relentless commitment – these two will make you a believer time and time again throughout their ‘Year Of The Groove.’

The current month of February has seen the Worldwide Groove Corporation release one of their most incredible sounds so far in this final accessible cut (there will be more – it’s not a full year yet!) called “Our Love Is Here To Stay” featuring Daniella Mason. This song, again with a somewhat Esthero-like quality through the jazzy vocal elements; this is an absolute standout track for atmosphere. I love the pulse, rhythm and groove…and with the combination of those incredibly sweet-tones from the vocals, this track is definitely a highlight within what is certainly an outstanding year for these two.

To say I’m looking forward to more from these two would be a complete understatement. Worldwide Groove Corporation have latched onto an incredible sound and they perform track after track with outstanding quality, diversity and straight-up musical-excellence. With their dedicated work-ethic and consistent release schedule – there’s no reason at all we shouldn’t all be heading over to their page and seeing what they’ve created each and every month; and on a personal level – I’d like to thank them thoroughly for providing such amazing depth, consistency and the constant flow of truly amazing music.

Find out more and have a listen right here at their official page: http://www.worldwidegroovecorp.com/