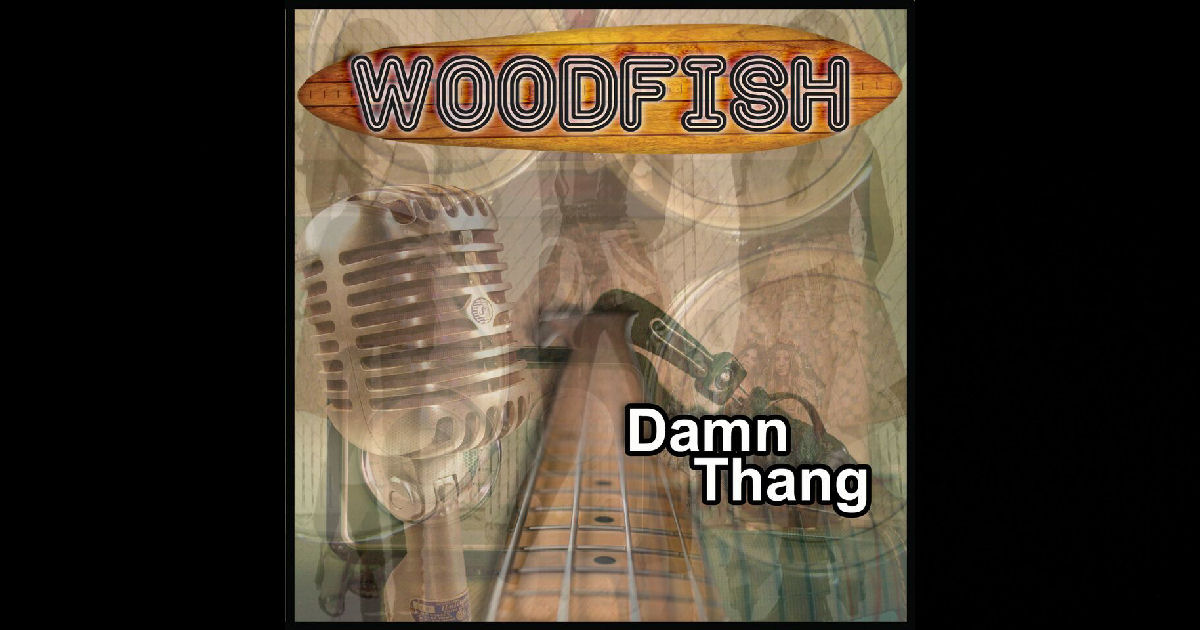 Anyone with ears and a spare ten-seconds to fire-up their new single “Damn Thang” could tell ya that though…in fact, it’ll probably take them even less time to reach that conclusion.  Woodfish get this cut cranked into gear & rollin’ along pretty much immediately…a lil’ bit of funk-style guitars from Chris Macock to lead the way, then BOOM – you’re right into the groove like you seriously won’t believe.

This is right up my alley personally…definitely the kind of flashy cut that radiates brilliant musicianship, uniqueness, and pure energy from every pore of your speakers.  The kind of song where, were you to see this live & then take a survey to see who was diggin’ on “Damn Thang” after it was all over, it’d be a hell of a lot easier to tally up the tiny few who weren’t than the thousands that would be – that’s the math for ya, right there.  Woodfish jams so hard, confidently, and unified, it’ll blow your freakin’ mind.

How I have not heard the name Steve Kalorin by now, I’m not quite sure; but now that I have, believe me, I’m never going to forget it.  This dude plays a bass guitar like you can’t even imagine, full-stop – like, you ACTUALLY have to hear what he does in order to even believe it, I’m tellin’ ya straight.  This is coming from a guy that puts Primus through his speakers on the regular and spent a lifetime growing up on the Chili Peppers like everyone else – I’m no stranger to what separates the good from the great.  Steve is greatness incarnate…and without a doubt, a massive part of what separates Woodfish from the rest.  He also sings for the band – and…you know…he fits.  I mean that in the best of ways – listen to almost any bass-centric band where the bassist is also the singer, and you KNOW you’re experiencing a widespread grab-bag of complete variety.  99% of the time, it’s because with the bass leading the way, the other players are naturally responding & grooving around it – it’s really no different than any song designed on guitar in that respect, quite often it’s that lead idea in the instrumentation that also ends up with the mic responsibilities as well…which can be…well…let’s say inconclusive, at best.  What I’m saying is, it’s pretty badass that Steve can actually sing with as much expression & tone as he does while still handling the absolutely impressive complexity & pace he’s playing with on the bass at the same time.

The real key to bass-driven music is, like Primus – you gotta have those precision ace-players right there beside ya that know what to do to fill in that space with something that doesn’t try to dominate the existing melody.  Like as if Larry Lalonde isn’t one of the all-time greatest guitar players in the world for that very reason – you know he is.  Similar to what’s being thrown at Dominic Kalorin on the drums and Chris on guitar here in Woodfish, it’s almost a kill-or-be-killed environment for musicians that truly separates the men from the boys…it’s a whole different style of playing in a band, entirely.  That’s a huge part of why I’m loving this band as well – because both Chris and Dominic clearly get what it’s like to play with a bass-player with the skills required to take the lead & rock it like Steve has, and they’ve got the chops needed to stick with him.  Dominic is an absolute beast on the kit and plays this track to perfection with seriously charismatic energy on the drums, which allows Steve to work his magic & spring off the dynamics & versatility of the beat, which then allows Chris to noodle & experiment with all kinds of audio awesomeness & riffage that brings that extra added spark & charm to “Damn Thang.”  You see folks?  I’ve been tellin’ ya from the get-go here, it’s all math & it all adds up to a flawless WIN.

Inviting?  Hells yes.  “Damn Thang” makes ya wanna throw down & party, no doubt about it.  Hooks are solid in both the verse & chorus, no issues there either…vocals are solid throughout this single…everything lines up and delivers on the maximum potential of this tune.  Like – LISTEN to that breakdown will ya?  It’s like Woodfish drifts into a whole different vibe around the two-minute mark, transitioning perfectly, and pounding their way back into a brilliant solo from Chris, who crushes it.  And this ENTIRE TIME…I mean…if you’re listening, you’ll hear it, Steve has never quit, never let up, and he is CONSTANTLY kicking not just some, but ALL of the ass back there on the bass.  I love the mix on this cut every bit as much as everything else, because you will notice that they really all do get their own moments in the spotlight where you’ll be able to hear each instrument get to flex & impress ya.  Believe me – they will – there’s literally nothing to not be impressed by when it comes to Woodfish and their new single “Damn Thang” – this is musical lightning in a bottle and a righteously good time beginning to end.  This is the kind of band that can get you excited about what music’s full potential can truly be like to experience – I’m more than stoked on this single from Woodfish, these guys are incredible musicians individually, and together, they’re absolutely electrifying.

Anything less than playing this single at full volume should be considered a crime as far as I’m concerned – “Damn Thang” is stunning sonic brilliance, jaw-dropping musicianship, and endless fun combined.

“Damn Thang” comes from the new self-titled EP by Woodfish – find out more about’em at their official website at:  https://www.woodfishmusic.com