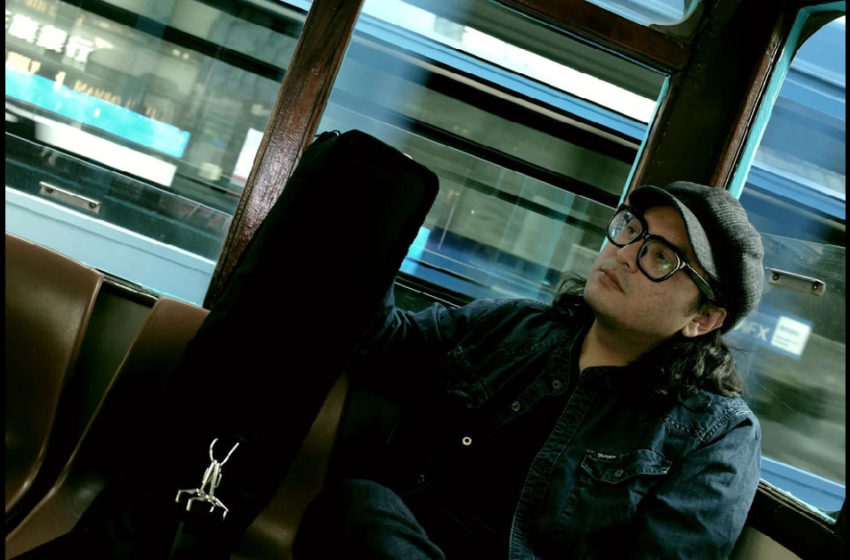 Oh how time flies when you’re having fun in quarantine don’t it?  I was just commenting about this the other day in realizing how long it had been since we last had the band Evoletah on our pages…and relatively speaking, it’s been a while since we’ve heard from artist William Elvin as well.  It was back in 2017 that we last reviewed his tunes, when we checked out William Elvin And The Circus Tour – Happy Days Ahead: The Home Recordings to our shared delight I’m sure.  Dude sure likes a lengthy title, but he’s also one heck of a songwriter, a passionate & highly-skilled musician, and an all-around great guy.

To be fair, from the looks of things, the moniker’s shortened up with a tight rebranding to a more simplified ‘William Elvin’ now…which should help get a few more of these tunes out there onto the internet without their titles being changed into an ellipsis.  Most importantly, he’s never short on ideas.

If you need a lil’ audible proof for ya, check out his latest single “Tram (Quarry Bay To North Point)” featuring Maita Ponce, and you’ll discover that even in the quaintest melodies, William Elvin displays a mastery of songwriting that truly captures something special that most songwriters simply don’t.  I mean, we’re talkin’ about one SPARE tune here in terms of its sparse sound & ingredients involved – this is practically bare bones with just an acoustic, slight keys, and a tiny bit of bass in the mix.  What’s going to absolutely amaze ya, is that you couldn’t possibly want for anything more than what you’ll hear; no joke folks, “Tram (Quarry Bay To North Point)” is about as perfect of a moment in time as you’ll find.  Tons of reasons as to why this works…and as stripped-back as the music may be, it’s because of its space, pace, and insightfully well-timed inclusions that make this sweet song stand out as boldly as it does.  The acoustic guitar plays the role of the backbone at the core of the melody – and thanks to its stoicism, that allows these other elements in the music to pop-up at any given moment along the way and really make an impact when we hear them.  Each additional note, from the bass to the keys, or what could very well be a plethora of instruments that make a tiny guest appearance along the way – all of these tiny fragments & pieces form the complete picture of one seriously well-crafted song where every piece finds its right place.  Comforting, warm, and as welcoming as ever; it really doesn’t get more inviting in sound than a song like “Tram (Quarry Bay To North Point)” – but I’d say that, as far as the masses are concerned, there’s a great chance that as impressive as the music of this charming little melody may be, it’s still going to be either the cleverly phrased lyricism or the phenomenal vocal performance put in by both singers on this song that makes the most memorable & lasting impression on’em.  I’ve heard William write many great tunes over the years…”Tram (Quarry Bay To North Point)” made me realize just how much I’ve missed his genuine perspective and his music, because this is ART.  This single is flawlessly structured, sung absolutely brilliantly, and ultimately gives both your head and your heart an equal dose of something to love.  As far as my ears are concerned, William’s done it again with “Tram (Quarry Bay To North Point)” – this is as gorgeous, captivating, and charming as music can be, it’s loaded with amazing words & heartfelt imagery, and a combination of voices that hits the mark.  Elvin sounds fantastic, humble, and real – and Maita brings an exceptional brightness, warmth, and depth to this collaboration with her spectacular voice strengthening the sweetness to the nth degree.  Bonus points for the slyest inclusion of a television theme-song you’ll be completely familiar with around the 2:30 mark…William references TV drama just prior to it, so we have to assume that’s 100% intentional…and given his high-level of dedication to his art & craft, I’m positive it is.  And it’s brilliant.  Everything he writes & sings about is so remarkably vivid throughout “Tram (Quarry Bay To North Point” – I love it.  If quality like this is what has kept him away for a couple years, it’s well worth the waiting.

Personally, I dig the other lead-single from William Elvin’s upcoming album Faces And Phases (Available May 2020) as well, which is called “She’s Not Taylor Swift.”  Here’s the thing though…we’re talking about a pretty widespread sound between the two cuts we’ve got here in review, one acoustically drive in “Tram (Quarry Bay To North Point)” and a more electrically-inclined tune in “She’s Not Taylor Swift” – and of course, people out there are gonna respond to what they prefer as they always do when it comes to selecting their favorite.  That being said, I think they both display the strengths in Elvin’s songwriting for sure, and you’d never hear an argument against having anything other than two quality tunes on my playlist here when it comes to both these singles – these are solid tunes, you’ll just likely like or love them both for what’s essentially completely different reasons.  My ONLY worry about “She’s Not Taylor Swift” ties directly into why I personally like it as much as I do…which is that this is pretty much the formula for half of the catalog by Better Than Ezra.  Don’t get me wrong – I love that band, and basically being a huge fan of them for years & owning every album they’ve got, this completely works for me, as an individual.  The fear is that…well…I mean…Better Than Ezra scored a couple hits and faded fairly quickly out of public favor on the airwaves as the scene around them changed…so on a commercial level, there’s a slight concern that Elvin’s revisiting a sound that some people dig on passionately, but seems to pass right by a larger audience somehow.  And believe me, I’ve never really known exactly why that is, or was the case with Better Than Ezra…maybe if this business is all about timing, they had theirs early on into their career and then, yeah…like I said, the musical landscape shifted around them and it got left behind…not entirely abandoned – there are still legions of fans that dig on the Alt/Pop/Rock sound out there, more like waiting for that cyclical nature of music to circle back around for this style of tune once again.  Which, who knows – that could be right now…maybe this is the right time for a mellow Alt/Pop/Rock cut that delivers the punch, passion, and melody you wanna hear, just like William’s creating so cunningly on “She’s Not Taylor Swift.”  I’m sure the general consensus will eventually prove that “Tram (Quarry Bay To North Point)” reaches a wider audience overall, but I’d be shocked if there weren’t a whole lot more people out there like me that seriously latch onto the sweetness in sound that you’ll find on “She’s Not Taylor Swift” and the way it shifts into a killer mix of like, College/Indie-Rock vibes as Elvin transitions this cut so expertly.  Chances are, if you’re like me, you’ve enjoyed the lyrics, the shifts between William’s natural tones and falsetto as he sings, and the pleasant demeanor this whole cut presents as it plays for its first two-minutes & thirty-seconds or so – but if you ask me, where this track takes its most impressive turn is in the explosion of radiantly colorful & blissfully distorted melody that takes place right afterwards.  It’s a powerful move and a dramatic shift in sound that pushes a wall of sound & melody at you in all the right ways…like you want this wave to crash right over you, know what I mean?  “She’s Not Taylor Swift” sparks up to inspired heights and an all-new level of creativity within the song when Elvin throws that switch into play and kicks this into more unique terrain where the combination of sound becomes much more beyond compare…this is his own true genius, on full-display.  It might just be a fraction of the song, but it’s by far its most daring part and rewarding to listen to – the rest, to me, is just about as easy to love as most, if not all, the music I’ve heard from this dude.  I’d take more tunes from William Elvin any day of the week and I’m seriously stoked to hear he’s got a full record coming out right around the corner in May with the official release of Faces And Phases.

Make sure to stay up to-date on the details and get all the info surrounding William Elvin’s new upcoming album Faces And Phases by visiting his official pages below!