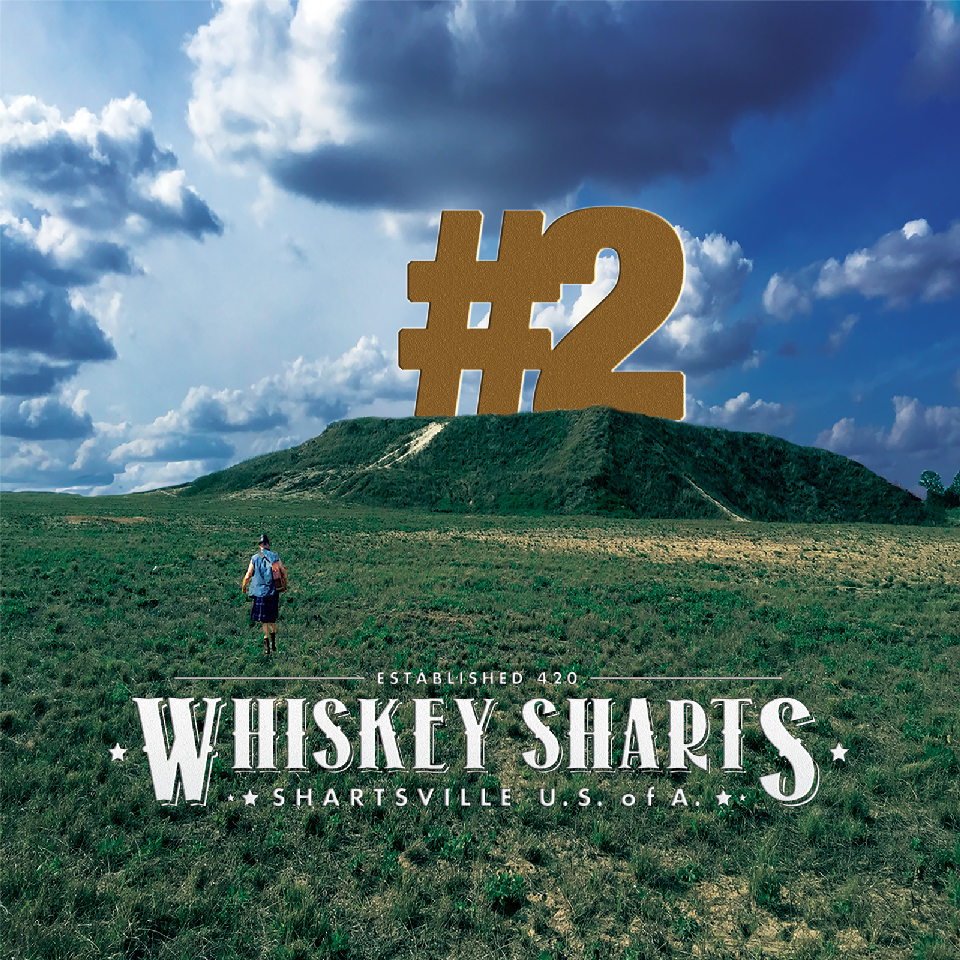 I don’t think that there’s anyone out there that could accuse the members of the Whiskey Sharts of being the kind of people that don’t follow through on a good joke.  It is impossible not to laugh, smile, guffaw, spit-take or smirk whilst listening to the highly-refined ideas on the #2 EP…leave the PC-attitude at the door and be prepared for gripping over-shares in the lyrics over the course of five tunes that attack immaturity with a completely professional approach.  You may call it misguided…you might think it’s crude or crass or whatever cuss-word you wanna throw in there…but you can’t deny that these pranksters are top-shelf serious when it comes to perfecting the art of the joke within music.  Buckle-up for some of that good old-fashioned presidential-esque locker-room talk in song form!

If you can’t relate instantly to the Whiskey Sharts sentiment in the opening lyrics of “I Love Marijuana” – then we’re like, you know, coming from different places, man.  I certainly appreciate this…I LOVED the soulful blues approach that the very beginning of this track takes on…it communicates the sincerity honestly and the desperation, love & respect for the greens perfectly.  A real ode to the ultimate love in life – one I can certainly relate to and appreciate…”I Love Marijuana” is a great reminder of just how much I DO love marijuana.  Every time the song came on I was like, ‘totally man…I HEAR YOU…’ like…this song just speaks to me on a level I really understand…cause man…”I Love Marijuana” and it’s awesome to have something to rock to whilst heavily weighing these concepts upon my mind.  And bong.  In all seriousness though, this song really kicks into gear with a Zeppelin-esque like fury and goes on to include incredible harmonies and clever layers in the vocals alongside the alt-country/rock beat.

Who doesn’t love “Titties?”  More or less…that’s the point the song is driving home here…gay or straight I’d like to think it’d be damn tough to disagree with what the Whiskey Sharts are singing about here in their very own tribute to mammary glands.  The song starts out suspiciously subtly before erupting into what sounds like a full-on celebration of the entire bar around them raising a glass and chanting the chorus along.  Say what you like about the content matter…you could argue that it’s immature but that’s like…just your opinion, man…bottom line is that “Titties” sounds like pure joy & celebration – if I could motorboat my speakers in approval, I most surely would.  I have to admit…Whiskey Sharts sound incredibly comfortable within the throes of “Titties” – definitely sounds like a place where they belong.  Love the way they’ve nestled & smothered their words into this one – it’s DDelightful.

“Pick Up Fuck” reminded me much of the kind of song you’d have expected to hear in Team America from Matt Stone and Trey Parker.  With the wicked layers of shouting echoed-layers in the vocals that really add to the call & answer of the narrative in the storyline – “Pick Up Fuck” is oddly relatable in a weird way…or like…the melody is something that you can feel in this one…bahhh…someone out there tell me they get what I mean here!  There’s a genuine sincerity buried in the melody that’s played with real heart like a powerful & strong rock-ballad…and of course, there’s the contrast of the words that mix humor with sweetness to make “Pick Up Fuck” the track you’re most likely to love before you realize what the words are actually saying.  After that point, you should REALLY love it…but that would be like, just my opinion, man.

Things start to take a slightly more serious approach on “Complicated” but as a result, the song itself does become a little bit more normalized.  I like the rhythm of the verse a lot…and I like the lead-in to the chorus…but I’ll put it this way – if “Complicated” was the sample of the Whiskey Sharts and the only sample I got to listen to, I’d be inclined to say that this one tune wouldn’t do enough to set them apart from the rest of what’s happening or has already happened in music.  It’s not that they took this one too seriously…you’ll hear on the following track “Go On Go” that the Whiskey Sharts can smarten-up and do serious really well too; I just felt like “Complicated” sounded like a good barn-burner to get the dance-floor crowded but didn’t really connect with me beyond it being a well-played & performed tune.  I did really like the roll the verse heads into just around and into the two-minute mark…that was the highlight on “Complicated” for me.

Ending on their most serious of notes, “Go On Go” is actually a pretty tender and heartfelt tune when it comes right down to it.  Sad stuff honestly…Whiskey Sharts prove through this final tune you can take them as seriously as they choose to play it…that there is time for jokes and time for things to get real and a place for both within their music.  I was really impressed by the personal nature and sincerity of “Go On Go” – and personally I really liked that this tune kind of comes out of left field.  I’ve often felt that the real jokesters out there also make fantastic truth tellers…it always easy to tell that things have become real with the jokes stop flowing for a moment.  With the added dedication and tribute at the end…you can tell this song truly does mean that extra 10% to the Whiskey Sharts personally…and I think they made a smart choice in playing this one straight.  Highly personal writing with Keith Fucking Jackson delivering a highlight performance in the words and vocals that has real emotion you can connect with…many people out there will connect with this melancholy melody from experiences they can relate to.  Music is often a go-to in the healing process…and something tells me that the Whiskey Sharts were able to carry on themselves by having written this song.  One of the best results we can have in writing something so personal and real is that people out there with similar experiences will have the added benefit of the insight and catharsis found in music made in the pursuit of healing…by proxy and listening, it goes on to soothe the souls of many.

And if I had to hazard a guess at what really drives the players in Whiskey Sharts I’d probably bet on that healing aspect of music being a large part of it.  Laughter is still the best medicine around – and this crew gives you plenty of it, but they also proved they can focus-in to make a beautiful & sincere track that hits home for its rawness & realness.  Tremendous ending to the #2 EP…one I’ll truly remember; I liked the jokes of the opening tunes but the way the Whiskey Sharts nailed the final song with “Go On Go” felt like they really delivered on what they had to say…they should be proud of what they accomplished throughout the EP but especially about the entirely memorable way they ended it in tribute.  Beautiful.

Find out more about the Whiskey Sharts at their page at Facebook https://www.facebook.com/WhiskeySharts and through the official sites below!