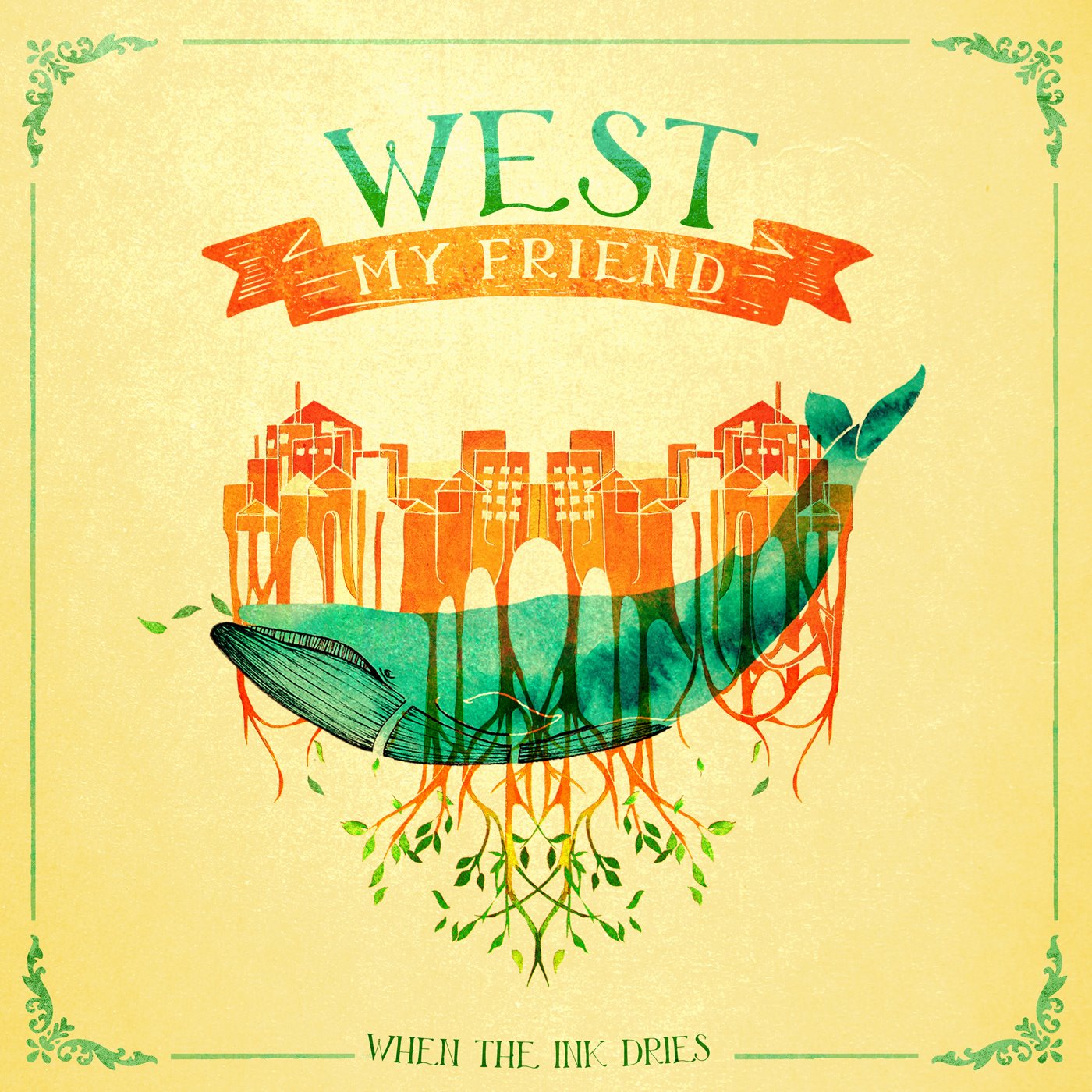 West My Friend – When The Ink Dries – Album Review

I’ve nearly had to dodge the internet in this past week altogether, preparing reviews for bands we’ve seen on our screens on SBS Live This Week…first Man Made Lake and here we have West My Friend. Both extremely talented…both great people…both from Vancouver Island…and…well…I mentioned they’re both bands full of great people right? So I hide to hold on to my objectivity and absorb myself in the music, shut my eyes tight and try to separate these fantastic personalities from the playing music…

Even if I had never met this band – the opening and title track “When The Ink Dries” might go down in history as one of my favorite album beginnings of all time. When The Ink Dries begins like a treasure map unfolding…the excitement is instantaneous and there’s promise of pure gold right away from track one.

My hat is graciously off to your and your fine band of cohorts; “When The Ink Dries” is the most incredible of album openings…the tempo and intensity of the music build up so much that you can’t help but get chills and buckle up for the rest of the ride. Alex’s voice & the back-up provided by the rest of the band (They all sing & hey, why not when you’re all this good!) set the perfect dramatic opening. West My Friend is back with a folk-vengeance!

It won’t take you long to get to the lead single “Missing You,” slyly slipped into the third spot and not letting the energy drop whatsoever after Eden Oliver’s brilliant performance in the previous track “The Tattoo That Loved Her Anyway.” “Missing You” is a song I had the privilege to hear last summer…a song I immediately noticed and have been desperate for them to record. In a true case and example of what is worth waiting for – this single delivers in every aspect. The band is at their absolute most flawlessness and at the height of their comfort as a solid group during this song, resulting in a laid-back but absolutely catchy-vibe you won’t be able to get enough of.

I mentioned to this band a long, long time ago slightly after meeting them for the first time…that if I could somehow bottle Eden Oliver’s voice and shampoo with it that I certainly WOULD….

Now go and have yourself a listen to “Thin Hope” and tell me you don’t want to get yourself a bottle…see how clean we all are now?

I’ve always had respect for this band as a group of focused musicians, but hearing the growth between their last album Place and their hard work and effort to out-do their last album is more than palpable and “Thin Hope” is one of the absolute finest examples. The music again is just fantastic…you can always hear bassman Adam Bailey doin’ his THANG…he’s a stand-up bass champion, hitting every note with ease and beautiful tone and really tying these songs together for the band. “My Lover” is a great example of his ability to hold the fort rock-steady while Alex basically gives the entire world a lesson on how to really make a mandolin sing.

“Troubles” is a beautiful song in this recorded version. I’ve seen postings of this live on their YouTube channel before in the past as they readied this album…but this recorded version really highlights just how central the vocals are to this band…and how their best asset never once lets them down. Harmonizing perfectly around Eden Oliver’s angelic verse and chorus – the sound comes out crystal clear and builds in a way similar to “Ladies And Gentlemen We Are Floating In Space…” for those of you who know Spiritualized out there…

Seeing these songs from early live versions, to them taking their time and getting it this correct in the studio is a complete trip! I LOVE seeing this band live and I’ve missed them the last couple times through town…they’re ALWAYS amazing to listen to and truly fantastic hosts…

…And then it hit me! Am I being like, hosted right now?

This album plays with such a focus that you hear it like you see a movie. It’s like I stepped into their three-dimensional album of warm & inviting, interesting & thoroughly entertaining music. Everything is so clear…it’s as passionate as the best theatrical production you’ve ever seen and flat-out – THIS ALBUM IS PLAYED FLAWLESSLY.

And NONE of it…sounds forced whatsoever. It’s extremely rare to find an album that sounds like the people making it are all in the right place in life…connecting as one. It sounds CARED for; these songs are well-written, with lyrics that tell beautiful, funny and heartbreaking stories. An album of the purest emotions, When The Ink Dries is authentic of an album as you can ever hope for from a band as genuine, original and skilled as you can get.

No joke world…wake the f*** up already…West My Friend is one of the most precious gems still undiscovered by many. Strange enough that my bearded face ended up here away from the rock and absolutely loving this band, but there’s zero reason to be alone.

It doesn’t get any better for me. End of review.

Yeah…no I shouldn’t go before mentioning this is truly one of the most beautiful songs ever written. Eden Oliver once again is at her absolute best, delivering the sweetest of melodies through the verse and once again joined by her chorus of angelic harmonies through Jeff, Adam and Alex. Alex shines in the backing vocals, Adam plays his heart out on the bass – and Mr. Jeff Poynter steps onto the pump organ and fills it with LIFE. The emotion in this track is staggering. Breathless.

“Baleen Whale” and “Dark And Deep” offer that traditional live feeling of seeing West My Friend perform. Reminding everyone of their folk roots, they mix up the texture of sounds well as they head into the final track, another beautiful ballad called “Last Call.” Poynter again brings in the ever-unpredictably-epic accordion once more, this time taking a well-timed and placed solo in this isolated, sorrowful, yet hopeful song. A perfect ending to this wild, dramatic and theatrical masterpiece from this outstanding band.

There is ZERO reasons for you to not be getting this album right now.

Seriously…the review’s really over this time…

Hey, how convenient! A link to the West My Friend facebook page! https://www.facebook.com/westmyfriend

P.S. – “The Cat Lady Song” is EPIC and awesome – a true stretch of their creativity and skills with results that paid off incredibly! Don’t miss that song! Don’t miss any of the other ones either though!