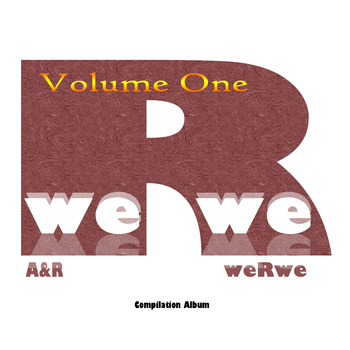 A compilation album…I’m not sure how you all take one of those in, but for yours truly here – this is a gift and certainly help enable my obsession with listening to all kinds of music! Brought to life by weRwe records, this album showcases talent from all over with a bunch of future superstars from all kinds of genres and styles making some incredible tunes. I’ve had enough listens through it to be able to explain what’s happening the best I can – so let’s push play and do this thang!

Starting the multi-record is Athena with a song called “Movement” – a great choice to open this all-new experience with weRwe records and a decent insight into the level and caliber of artists they’re working with. It sounds like it has a Spanish or Latin influence in the music and Athena puts her smooth vocals against some big-beating drums to help start this compilation off on the right note.

Rex Razor steps in immediately on track two with “Celebrate Life” – a track you MUST know already from this past summer…right? RIGHT? If you don’t know this track yet, you can’t consider your summer complete; you cannot pass go and collect $200. The fact is – in all honesty I don’t know if you had access to this track, but I do know that this song possesses all of the qualities of any hit song on pop-radio stations right now. No reason this shouldn’t be a huge hit in the clubs and I certainly expect to be hearing the name Rex Razor again in the future very soon….

At this point in Volume One – you’ll still feel like you’re listening to something you might expect from a compilation…but by the third track, coming from Janice Kephart and called “Cherry Whispers,” you’ll change your tune as the compilation diverts away from traditional song-structure into true art pieces like this song. A combination of poetry, narrative and dance-music – Kephart brings something different to this collection and having that track sit so close to the front of the album leads me to believe that things will continue to be “different” from here on in…

The next two tracks confirm the suspicion. KaiCarra brings in an operatic performance on her track “Lady,” in a track cut with an immaculate and isolated atmosphere. In contrast to that, the following cut from Kari Tribble has the opposite effect; in a swirling feeling similar to Portishead or Massive Attack, this song envelops the listener and pulls you into another world. With completely soothing vocals – this dreamlike track off Volume One is an extremely gorgeous track.

At just under halfway through the album we get yet another complete stylistic switch with Ryo Utasato and a wicked electro-mix on the track “Blue Montage.” If the rest of the album has relaxed you so far, “Blue Montage” will wake you back up and easily convince you that there is far more to come on this mix. And there certainly is. And just like the rest of this mix – it comes at you right away.

Steven Buckner and I need to have a beer together. I love this track he’s got on here called “Heaven Vs. Hell,” which is at this point in the album the largest departure from a “typical” song and into true soundscape territory. Its subtle pulse and unique rhythm serve perfectly on its own and also as a set up to the energy explosion provided by MikeWhitePresents on “Abandoned On The Dancefloor” immediately following. With a unique blending of electronic and guitars – this is a good idea from beginning to end. Makes me think of tracks like “A Wash Of Black,” or “Restless” by U.N.K.L.E. – the use of actual guitar SOLOS is a supremely tough thing to pull off against the grain of electronica but MikeWhitePresents has found the path to doing this extremely well.

A HUGE credit to weRwe records for their hand in this mix. As I head to guitar driven tracks from Mike Colin and L.O. Crocodile after getting just a taste of guitar in the MikeWhitePresents electro-track, I take a quick moment to truly appreciate the assembly in this compilation. They’ve handled it expertly and it flows as perfectly as your favorite mix-tape. It has taken us through all different genres and styles and has truly done it well by introducing pieces of what’s to come subtly within the sounds of the tracks you played only moments before.

Mike Colin does his thing. In perhaps the most standard-sounding track within the confines of Volume One, it also ends up becoming the largest departure from the material on this album after a complete listen. I can see this song easily packing the dance-floor with cougars aplenty to this track that sits somewhere oddly between Bruce Springsteen and The Flaming Lips. While it’s more of a stripped down pop-rock melody, weRwe again cranks it up a notch when shifting into L.O. Crocodiles instantly catchy guitar-rock frenzy in a perfect example of one of those tracks that make you want to see what it would look like LIVE as well. It has a perfect bouncy-rock beat that is sure to hook in any listener.

Heading into a track called “Smell Like A Supermodel,” it’s the first of the last three tracks on the mix but far from letting the energy on the album die down. This mystic track from a band called MSG has a wicked mix on it with incredible background vocals happening against a hypnotic beat and guitar rhythm. This track lives in the dark alleys of your mind, reminding us just how cool those places can be even if they are a bit scary sometimes. As far as atmosphere in a track is concerned – they’ve nailed it here. Listening to “Smell Like A Supermodel” is literally like stepping right into the perspective of the world of MSG.

It is Eugene Jacquescoley’s track “I Am What I Am” that even gives you a hint that this compilation is nearing the end. After the all-encompassing atmosphere of MSG, weRwe again chooses to switch up the vibe and brings you into minimalist electro as the album progresses towards the final cut. Eugene does what he does well and has assembled a decent slice of music here with “I Am What I Am,” again perfectly placed by weRwe to help set up the end of this album.

This final track, actually called “Volume One” comes to us from a band called Cannon and it is an EPIC ending to this expertly assembled mix. This is the most chilling track on the mix and man does it sound BIG. An instrumental track and as inventive as it can get in sound-choice and samples – this was an astoundingly perfect choice to end the compilation from weRwe Records. Definitely looking forward to hearing more from Cannon in years to come; this particular track reminds me of some of the mellowed-out atmospherically HUGE tracks off of the album Drukqs by Aphex Twin.

This entire mix started perfectly, never let up and ended immaculately. Not only is weRwe Records showcasing a plethora of talent but they truly do showcase their own ability for being able to FIND this talent and better still – properly assemble it. If the purpose of this mix is to simply introduce us all to these artists and make us curious enough to listen to more – weRwe and their talented artists and bands can consider that mission accomplished. I want more. Lots.