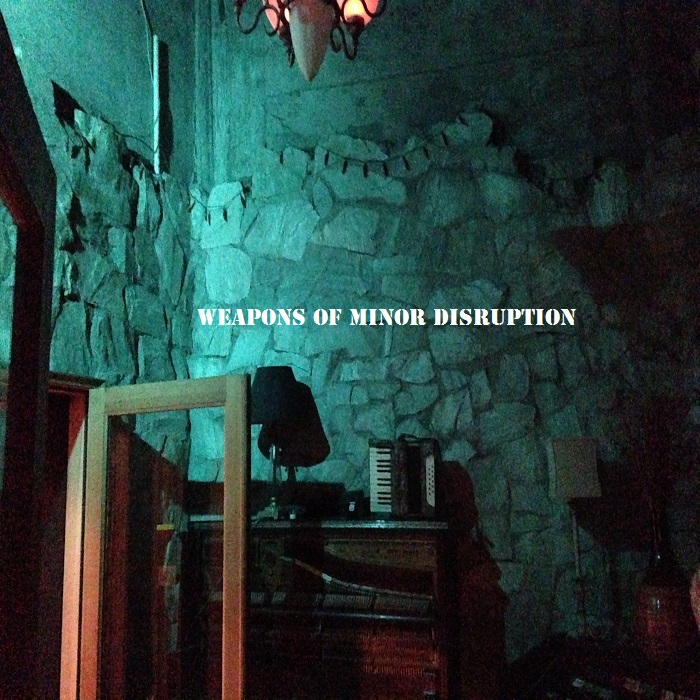 We’ve been on a pretty damn solid hot-streak lately here at the homepage…these speakers of ours have been cranking out some amazing new tunes as of late. And to see that an artist we’ve dealt with in the past through reviews, through our show…a reliable innovator we’ve come to know and love over the years is back in an entirely new project and was up on the playlist next; what can I say besides it was a foregone conclusion that the wild & creative turn that the music has been taking lately in the reviews here would be continuing on today. It has been our immense privilege to listen to the evolution of Rob Loncto’s music through his past-projects Black Tar Pineapple and The Danbury Lie; he’s always found a way to be different, unique and compellingly captivating with his choices and instincts. This time around in Weapons Of Minor Disruption, it seems as if he’s found yet another avenue & direction to take his music in with a more acoustic-vibe driving The Shoreline Sessions and a concentrated focus on melody.

Taking a real stripped-down, raw & real approach to this entire record, it begins with one of my favourite tunes that Rob has ever sent our way, “Along The Spiral.” There is something so impressively comforting about the rhythm and melody of this song…I always expect great things from this guy – but I’ve got no doubt after several subsequent listens through this record that he’s already outdone my high expectations with this stellar song. “Along The Spiral” floats along with gentle guitar and tenderized hand-drums providing the percussion & beat…it is an absolutely magical opening to a record and a beautifully recorded song that captures its vibe perfectly.

Heading towards a slightly more traditionally-signature-Rob style on “A Live One,” you can hear The Danbury Lie could have almost had this track were it not for its more subtle nature. The harmonies and bizarre ideas of Rob take shape inside all his projects, but I gotta admit, against this more subtle-natured & eerie sound that The Shoreline Sessions has – they seem to work just that 10% more. In short…I think our main-man might just be onto something here; there’s a great natural-feel to the tone, rhythm and performance of “A Live One” – yet its precision tips its hat in favour of these tunes being as well-rehearsed as they truly sound. The added electro-elements…which I believe are actually supplied by an APP (welcome to the digital age folks!) sound fantastic and I love the dark-groove that “A Live One” catches throughout its verse & chorus…but I think what I really loved most was the amped-up ending it reaches after a satisfying build throughout this menacing sound & even-stranger tale.

I dig the classical-riffage in “Anthem” and the switch-up in the approach to the vocals. At times I questioned whether or not they completely ‘worked’ for me…there’s a sharp-contrast between the aggression in Rob’s vocals and the smoothness they reach afterwards…but if you listen to the lyrics, you’ll hear it’s all on-point, purposeful and making use of the exact emotion necessary to really bring the meaning to the words. Once again the combination of guitar and percussion sound perfect together; its downward chord-progression makes the entire track feel like a melodically-intense downward-spiral. The final switch in “Anthem” and last thirty-seconds puts in a name-check for the new-project and really ends up sounding brilliant in its final moments.

“Ash” was a much tougher sell for me…I wasn’t a fan of the hook in the vocals on this one at the beginning of its journey. As the short tune begins to twist and bend just before the clock strikes the first minute, “Ash” becomes something much more attuned to my own taste and palette. So…yeah…I don’t know about this one overall, I’ll admit I had a tougher time on this one lyrically getting into it – but it’s inventive middle saved “Ash” for me and brought in a ton of redeeming qualities to the song. The electro-elements added in and overall switch in the vocal-flow to a more groove-based melody…this middle part could become an entire song on its own – but that could be said of much of Rob’s multi-faceted, multi-dimensional style of writing. We get what we get…and let’s face it – it’s not often the money-shot ever lasts as long as we might like it to!

“The Safe Notes” ends The Shoreline Sessions with a slightly more loose & playful-vibe. Riffing-on the idea of playing the basics and getting away with slacking it up – it’s another clever-tune and great example of the sly humour Rob slips into the music every once & awhile. Great bass included on this final-cut and it makes for a solid ending to a record with a really unique feel & atmosphere in comparison to anything I’ve heard from Rob in the past. And the guitar notes that bend-away hauntingly in “The Safe Notes” are absolutely audio-gold…in fact, they actually remind me of the strange guitar sounds you’d find on Beck’s album Mellow Gold…reminds me of the haunting and hollow sounds of “Whiskeyclone Hotel City” in a way.

I can’t lie and say that this record doesn’t start out with what became my favourite tune on it – but the quality and writing stayed consistently inventive and entertaining thereafter and stayed on-course to reveal the real raw-poetry and subtly-captivating, more minimalistic-side to what this creative artist can bring to the table. At this point…with all the music we know of that he’s made, created, written, recorded, jammed and re-created…that table’s getting pretty full of achievements, critical-acclaim, vibrant-songs & new-sounds – it’s all you can eat at this point!